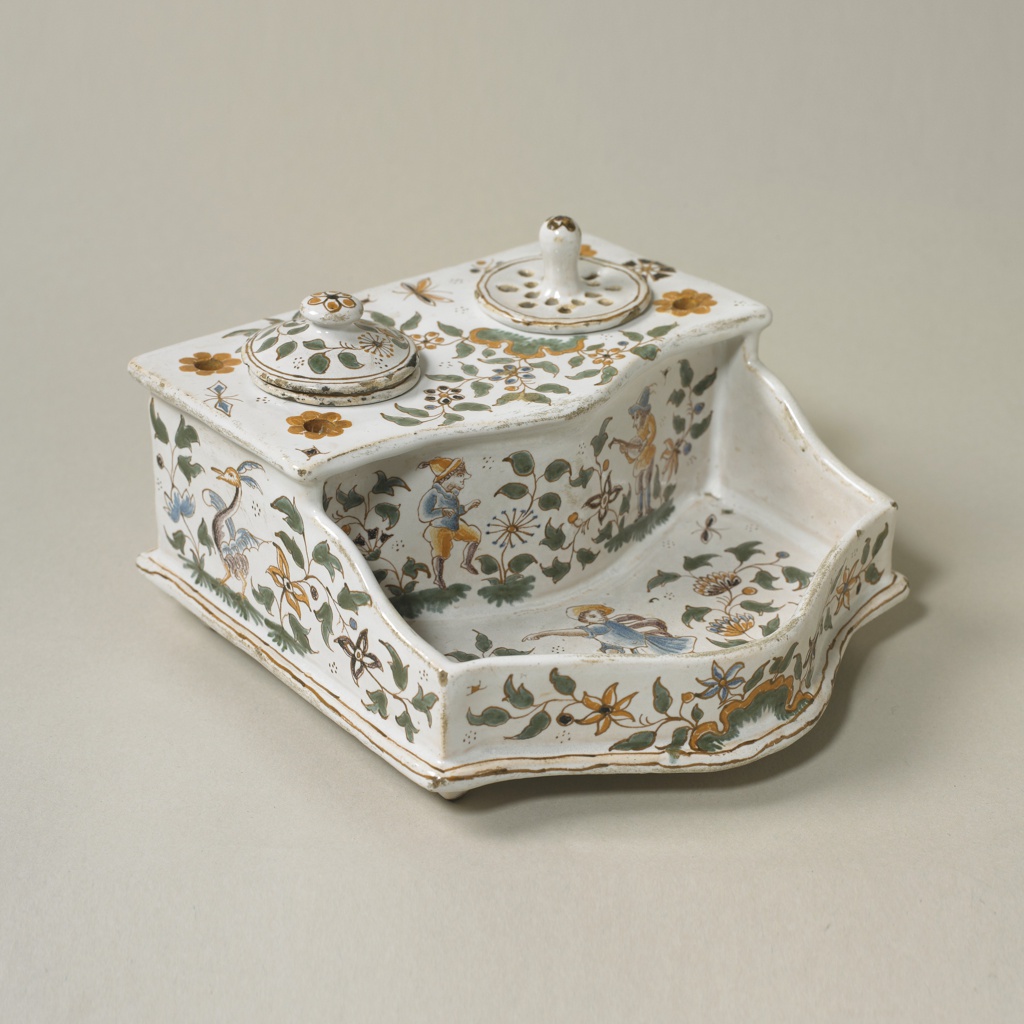 Made of faience, a type of tin-glazed earthenware produced in France, this brightly colored inkstand held a pot for ink, a sander, pens, and various writing accouterments. Initially derived from Middle Eastern regions before the 9th century, faience developed in France during the 16th century; the French producers were largely influenced by Italian makers of maiolica, another type of tin-glazed earthenware dating from the Renaissance. Tin-glazed and enameled French faience was used to produce decorative objects for everyday use, such as plates, platters, mugs, tureens, vases, and more.[1]

The production starts with a mixture of clay that is then formed, and coated with glaze and metallic oxides before being fired a single time in a kiln at temperatures exceeding 1,830 °F (1,000 °C). This French technique was called Grand Feu (high fire). In a second technique, the Petit Feu (little fire), the clay is fired before and after application of the glaze and metallic oxides. The second firing is done at a lower temperature; this technique allowed for greater precision in painting and a broader range of colors.

There were three major faience manufacturers in France: Nevers, Rouen and Moustiers[2] This inkstand was made in Moustiers Sainte-Marie, the ‘ceramic capital’ of a small village located in the southeastern Alpine region of France. Moustiers ceramics were highly favored by the 18th-century aristocracy, particularly after Louis XIV had his silver objects melted down as a way to pay his war debt. Colorful faience dining ware restored a sense of luxury to the royal table. The porcelain-like appearance appealed to the nobility, and the wares’ colorful charm appealed to all social classes. Made mainly from natural and locally accessible materials, faience production flourished.

Early Moustiers faience sported a monochromatic palette: delicate blue decoration on a white surface that most often depicted figures and interlaced grotesques. This inkstand represents the emergence of a polychrome palette, as well as the appearance of whimsical figures surrounded by vegetation placed randomly about the ceramic surface. Made possible by the Grand Feu technique, hues such as mustard yellow and olive green enlivened the color repertoire.

This object is on view in Moustiers Ceramics: Gifts from the Eugene V. and Clare E. Thaw Collection at Cooper Hewitt.

Molly Beegoo is a Curatorial Fellow in the Product Design and Decorative Arts department at Cooper Hewitt, Smithsonian Design Museum, and a first-year graduate student in the History of Design and Curatorial Studies program offered jointly by Cooper Hewitt and Parsons School of Design.