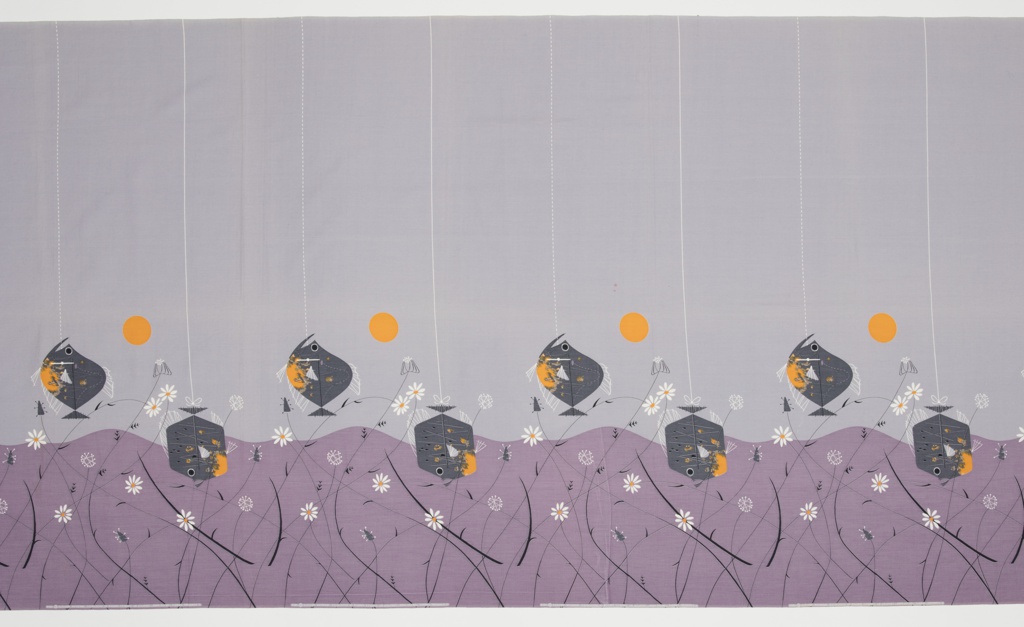 Behold how black skimmers fish for their finny food. As the tide falls and the moon rises, a squadron of skimmers shimmers over the glassy cove, shallow-plowing the shallows with their razor-thin lower mandibles, scooping up minnows by the many from the mini furrows. It’s a little like seeing with a string, and you have to wonder if they don’t come up with a lot of flotsam and jetsam. Isn’t there an easier way to make a living? Not if you’re a black skimmer. (1)

These are the words of Charley Harper, an American modernist whose imaginative wildlife illustrations in The Golden Book of Biology (1961) captivated a generation of young readers. His artwork, which was sometimes accompanied by snippets of his own humorous prose, has remained so perpetually relevant that designer Todd Oldham initiated a revival of his imagery in 2001, six years before the artist’s death. New glassware, fiberglass trays, and home textiles featuring Harper’s work are still sold at specialty retailers such as Fishs Eddy in New York.

Having been raised on his family’s farm in West Virginia, Harper went on to spend a lifetime working on subjects drawn from nature and wildlife. His projects ranged from illustrations for the now-defunct Ford Times magazine to posters for the U.S. National Park Service.

But first, in 1953, he created a single textile design for Associated American Artists called On the Hook. It is clear that he already had an eye for distilling nature to its essential components: a wavy horizon line suggests a pale gray sky above a mauve-colored sea, where slate-gray fish have been caught on white lines. The sun, a simple yellow dot, is reflected in the centers of small white flowers.

Harper’s love of nature spurred him to activism. In the last year of his life, he discussed his studio practice with Oldham in a WXVY interview: “Right now I’m working on global warming. My latest effort is a cardinal sitting on the head of a polar bear.” (2)

Rachel Ward Sepielli is a recent graduate of the History of Design and Curatorial Studies program at the Cooper Hewitt.

← Who is Phyllis?
Pretty Fly for a Tea Tile →

One thought on “Natural Talent”

Harper actually produced two fabric designs for Associated American Artists! On the Hook was the only border print for them though–the other was an allover print (and not of fish, of buildings).