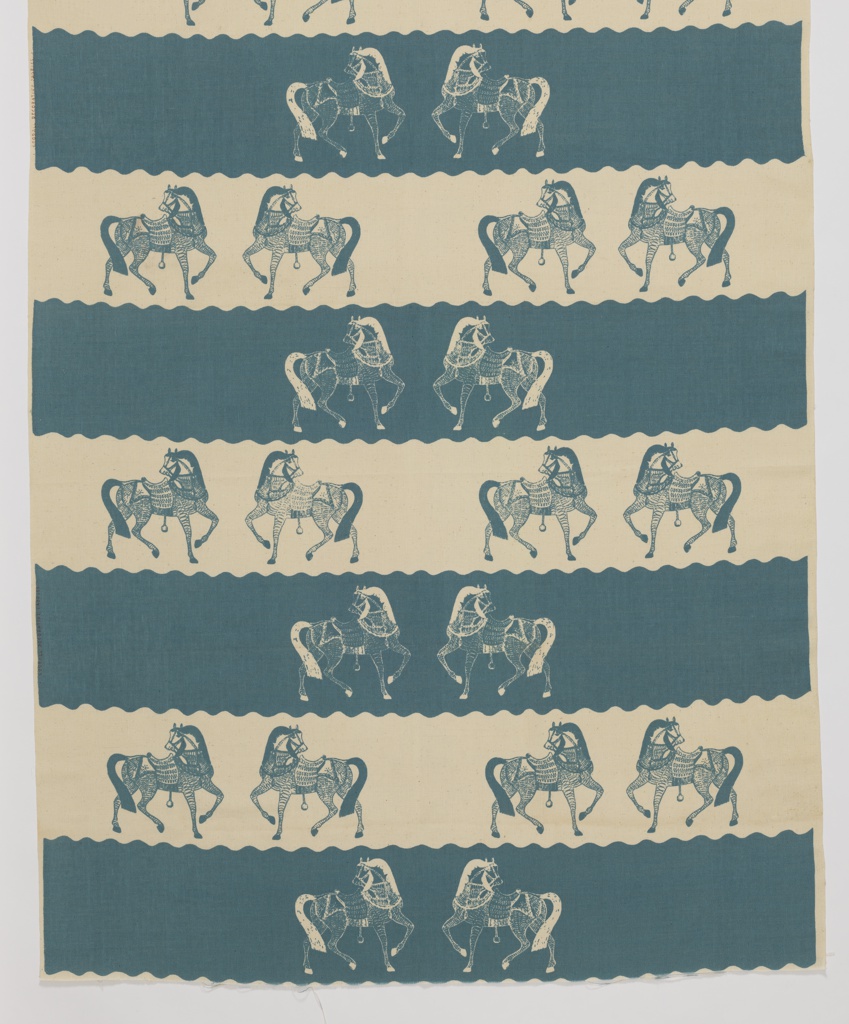 Marguerita Mergentime is noted for her innovative use of text as a decorative element, and among her many sources of inspiration were books of calligraphy and penmanship. The “Spencerian” of the title refers to Spencerian script, a cursive writing style developed by Platt Rogers Spencer and promoted through his 1866 book, Spencerian Key to Practical Penmanship. The script’s sweeping curves were the standard for American business documents from the 1850s to 1920s, as well as for elegant personal correspondence.

Folk art was Mergentime’s other great love, and according to a 1988 New York Times article, “Many who mastered the swirled lines and swept curves of Spencerian script went on to adapt their cursive skills to drawing.”[i] A unique folk art style called calligraphic drawing developed in the late 19th century, and frequently pictured birds and animals, in particular horses or carousel horses, with the addition of loops, curves, and spiraling embellishments. This design was based on such a drawing in the artist’s collection. The horse also appeared on a tablecloth from her Folk Art collection of 1939, and on plates.

Spencerian Horses is one of a collection of six ensembles of drapery and bedspread prints Mergentime created for Goodall Worsted Decorative Fabrics Division. “Mrs. Mergentime has long been noted for her American prints based on extensive research into the design heritage of the United States, which she recasts into a modern idiom,” Retailing wrote in December 1940.[ii]

This is the first work by Marguerita Mergentime to enter the museum’s collection.

One thought on “Spencerian Horses”

This is a wonderful and educational entry…I study Ruth Reeves’ design which has affinities…happy to learn about Spencerian but note that the Palmer Method overtook it. I see this in handwriting of New York artists working in 1940s.
I was hoping to see the decades worth of work that Mergentime had produced and was wrenched to learn she died so young. Thank you