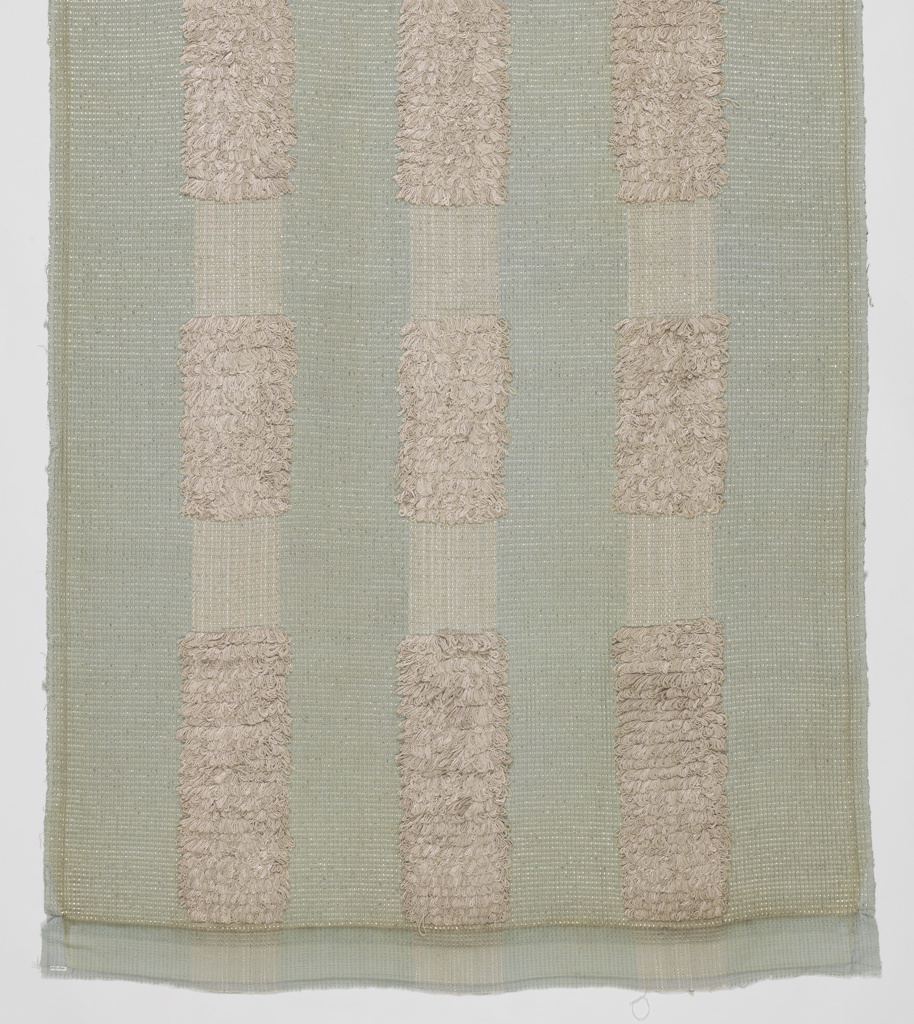 The play of color and texture that suffuses Dorothy Liebes’s Dobeckmun Dazzle exemplifies her work as a weaver and designer of modern interior and dress fabrics. The panel lives up to its name, dazzling the eye with silvery threads that contribute a subtle, overall sheen to the seafoam and grey striped design. Adding further visual delight, the pale grey verticals feature an alternating pattern of smooth and plush looped (velvet) textures.

The title of the textile acknowledges Liebes’s ties to the Dobeckmun Company (now Dow Chemical), the manufacturer of Lurex. A tarnish-proof metallic thread, Lurex, made with a strip of metal (often aluminum) layered between two thin pieces of plastic film, was marketed as a durable and vibrant material suited for use in furnishing fabrics. Liebes, who established her textile business in San Francisco in the 1930s, began consulting as a color stylist for Dobeckmun in 1946, advising them on color trends in order to bolster demand for Lurex amongst textile manufacturers. [1]

One of the hallmarks of Liebes’s career was her collaboration with industry and the way in which she embraced both hand- and industrially-woven textiles. Liebes relied on hand weaving to produce custom design work and to establish patterns for industrial production. Prior even to her consulting for Dobeckmun, in 1940 Goodall Fabrics had retained her services as a designer and stylist. [2] It is possible that Dobeckmun Dazzle was one of the fabrics that Goodall manufactured. The firm worked carefully to implement technical innovations that would allow for Liebes’s designs to be industrial produced while still maintaining a sense of handmade irregularity and artistry. The fabrics Goodall made notably featured loops, fringes, and lush textures “in the wonderful Liebes colorings.” [3] Although Dobeckmun Dazzle is less vibrant than particolored designs such as Mexican Plaid, it well demonstrates Liebes’s close attention to textural effects.

Liebes’s career spanned four decades and as early as 1947, she was dubbed “first lady of the loom” for her new and “artistic approach to weaving.” [4] The breadth and depth of her career only expanded over the following decades, and eventually included a vast array of achievements. Notably, near the end of her career, in 1970, Liebes was the first recipient of the American Crafts Council’s Award of Merit. Designers Edward Wormley and Henry Dreyfuss and architect Edward Durell Stone spoke at the award luncheon, hailing her as “certainly the most talented weaver of the twentieth century.” This honor was paired with a retrospective exhibition of her work at the ACC’s Museum of Contemporary Crafts (now the Museum of Arts and Design) that same year. [5]

Erica Warren is Assistant Curator in the Department of Textiles at the Art Institute of Chicago.