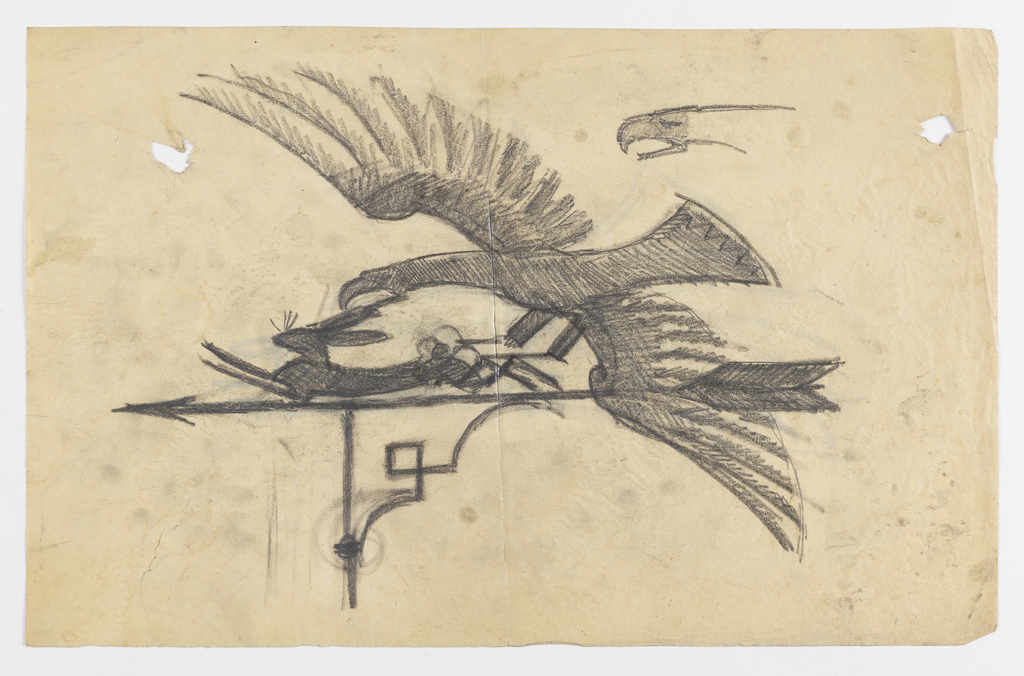 The Central Park Zoo:  home to exotic birds, barking sea lions, and remnants of artist, William Hunt Diederich. Upon the Zoo’s 1934 renovation, Diederich was commissioned to complete a series of iron weathervanes. Today, on the roof of a maintenance facility on the Zoo’s south end, four replicas of those original weathervanes remain. A cat, an ibex, a wolf, and a deer sit proudly as reminders of the artist’s legacy. In the photograph below, the original cat makes its understated debut behind Mayor LaGuardia and an accompanying crowd on opening day. Out of the hundreds of Diederich design sketches in the Cooper Hewitt collection, none can be directly connected to these weathervanes. However, the sketches can teach us much about Diederich’s style and process, regardless of whether they were realized.

Diederich’s childhood memories comprised his father’s passion for hunting and horse breeding and his own hobby of cutting paper silhouettes of animals. As a young adult, he worked briefly as a cowboy in the American Southwest. Naturally, animals became the focus of Diederich’s career. In this design sketch for a weathervane, Diederich alludes to the object’s original function—movement. However, the design pays less attention to the potential movement of the object itself and more to the dance between the two depicted animals. We witness the decisive moment in which the hare, on its last bounding stride, is caught by the eagle’s beak and barricaded by its swooping wings.

Diederich’s work was influenced by the Arts & Crafts movement of the late 19th and early 20th centuries. The movement originated as a reaction to rapid industrialization and mass production in Europe and the United States, and its proponents focused on the production of quality, hand-crafted decorative arts and the return of these arts to the average household. Diederich followed suit, designing unique objects almost exclusively in cast iron. Along with public commissions for weathervanes and signposts, he also designed many works for private homes such as gates, staircase railings, and fire screens, bringing his love of animals, and of what he may have considered simpler times, into the homes of well-to-do New Yorkers.