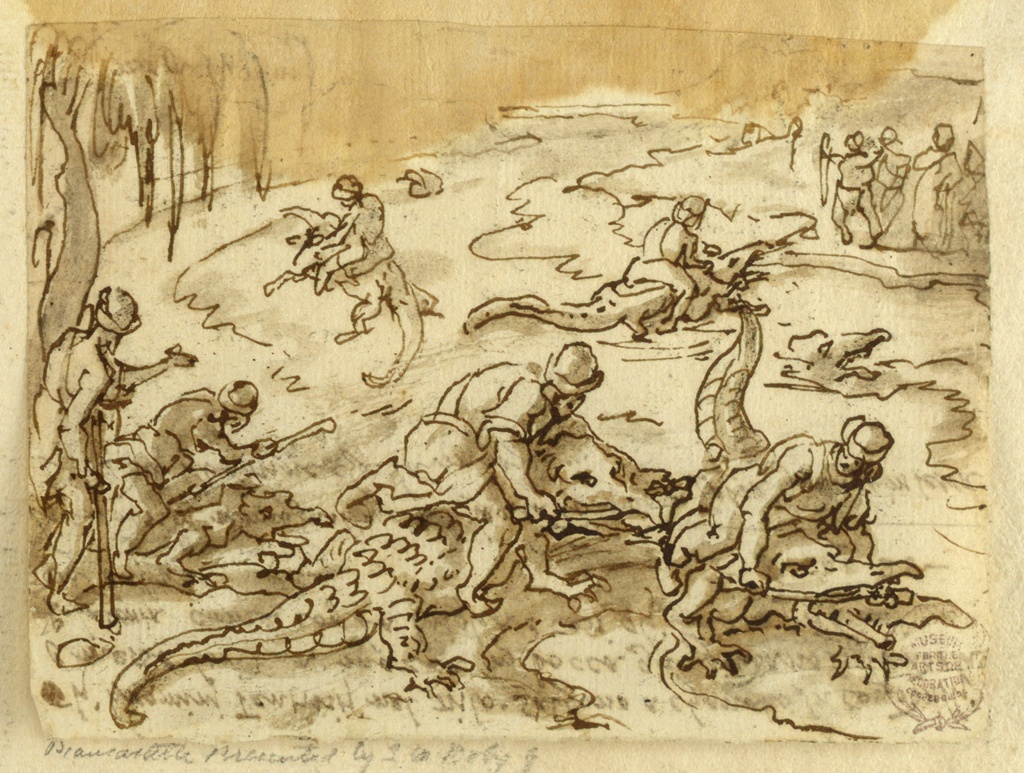 How to catch a crocodile? In this drawing, the Flemish artist Jan van der Straet, called Stradanus (1523 —1605) shows us one particularly bold method. Hunters sit astride their prey, forcing long sticks between the crocodiles’ snapping jaws; companions armed with clubs wait nearby, ready to bludgeon the overpowered reptiles.

The image isn’t based on first-hand observation—Stradanus never rode a crocodile, or saw it done—but was instead inspired by the ancient Roman author Pliny the Elder (AD 23 —79). In a note inscribed on the back of the sheet, the artist refers us to Book 8 of Pliny’s Natural History, to a passage describing the fearless inhabitants of a place along the banks of the Nile called Tentyra. These Tentyrites, Pliny explains, are the especial enemies of the crocodile, and “the only people who dare attack it. They even swim in the river after it, and mount its back like so many horsemen; and just as the animal turns up its head for the purpose of biting them, they insert a club into its mouth, holding which at each end, with the two hands, it acts like a bit, and, by these means they drive the captured animal on shore.”[1]

Stradanus’ summary of these ancient lines, written on the back of the drawing, is composed in Italian, not Dutch.[2] Although born in Bruges and trained in Antwerp, in his late twenties Stradanus had moved to Italy, where he found plentiful work at the Medici court in Florence. In the 1560s, for the family’s Tuscan villa at Poggio a Caiano, he produced designs for tapestries depicting hunting scenes. Following the success of that project, Stradanus undertook a similarly-themed endeavor that would reach a much wider audience: theVenationes Ferarum, Avium, Piscium (Hunts of Wild Animals, Birds, and Fish), a set of 104 engravings representing various modes of hunting. The series was carried out in collaboration with printmakers in Antwerp, and published over the course of the next three decades. [3] Tentire in Aegypto, Nilum iuxta, insula gentem / Intrepidam gignit : Crocodili haec scandere dorsum / Audet : refrenat baculo os : discendere cogit / Ex amne in terram : mortem acceleratque nocenti.  The author of the Latin captions was A. C. Kilianus Dufflaeus in Antwerp, and so presumably Stradanus’ Italian notes on the back of the page were not composed with Kilianus Dufflaeus in mind. On the frequent appearance of manuscript notes by Stradanus on the Cooper Hewitt drawings, see Michel N. Benisovich, “The Drawings of Stradanus (Jan van der Straeten) in the Cooper Union Museum for the Arts of Decoration, New York,” in The Art Bulletin Vol 38. No. 4 (Dec., 1956), 249—251.