Iron Jewelry: Grace from the Most Basic of Elements 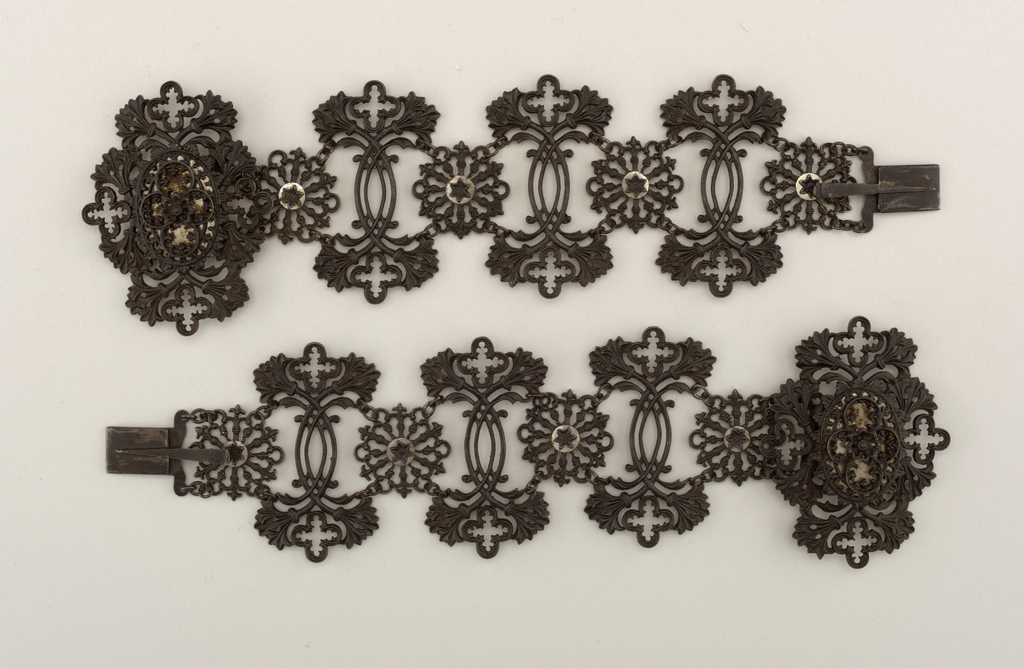 Each of these iron fretwork bracelets is a wide, flexible, linked band comprised of three segments with a quatrefoil-and-foliate pattern alternating with rosettes, all rendered in the Gothic Revival style. Each large ornamental clasp, which is similar in design to the smaller elements, yet more detailed, serves as a focal point when the bracelet is closed. The delicacy of the bracelets’ openwork ornaments stands in opposition to the hard material of which they are made.

Iron jewelry made its appearance in the mid-18th century, when the French king, Louis XV, solicited wealthy citizens to “donate” their precious gems and metals to fund campaigns during the Seven Years War. As gold and silver adornments were lost, iron jewelry came to the fore becoming especially popular during the Napoleonic wars of 1813-15.

The production of Berlin iron jewelry began in the early years of the 19th century when the Prussian rulers of Germany followed the course set by France, urging the upper classes to contribute their precious jewelry to help fund the War of Liberation. In return, these citizens were given iron jewelry as gifts for their loyalty. Until then, iron jewelry was predominantly worn as a symbol of mourning.

The iron tracery of such jewelry was treated with a black matte finish that prevented rust, contributing a subdued appearance suitable for mourning jewelry. Berlin iron jewelry, initially seen as lackluster, suddenly became a symbol of patriotism and honor. As time passed, the jewelry’s popularity increased due to its beautifully detailed craftsmanship rather than its political ties.

The process of casting and coloring the ironwork is said to have originated with the Gleiwitz Foundry in Silesia, Prussia in the 1790s. Production then shifted to Berlin when that foundry was taken over by the Royal Berlin Foundry in 1804. Manufacturing this style of jewelry continued to the middle of the century when its demand as a fashion accessory declined in favor of jewelry that was more overtly Gothic.

Although Germany and France are well associated with iron jewelry, English makers cast their own pieces during the Regency period. After 1815, and the end of the Napoleonic wars, trade between England and much of Europe resumed, and it was not long before Berlin iron jewelry reappeared in Great Britain. It is worth noting that the style of iron jewelry changed over time. There were three distinct styles of Berlin iron jewelry: the earliest was neoclassical, with molded cameos and medallions portraying classical figures set between decorative chains; then, in about 1815, motifs changed to reflect more delicate, lacy floral forms; while 1825 saw a Gothic revival in which many of the pieces evoked cathedral windows and wrought iron gates.

While not as seductive as the precious bejeweled pieces that survive from that time, iron jewelry has an innate subdued beauty that graces the wearer.

← Not Your Typical Wallflowers
Sacket Sampler →

One thought on “Iron Jewelry: Grace from the Most Basic of Elements”

I am researching Erma Hewitt for a proposed article. She was from this area of the Finger Lakes. She was likely the primary female craftsperson of her time in the 1800s working in metal jewelry. She was known for her teaching at Alfred Univ. I’m hoping you may own some of her pieced.

Any assistance will be appreciated.
Julie Cummins