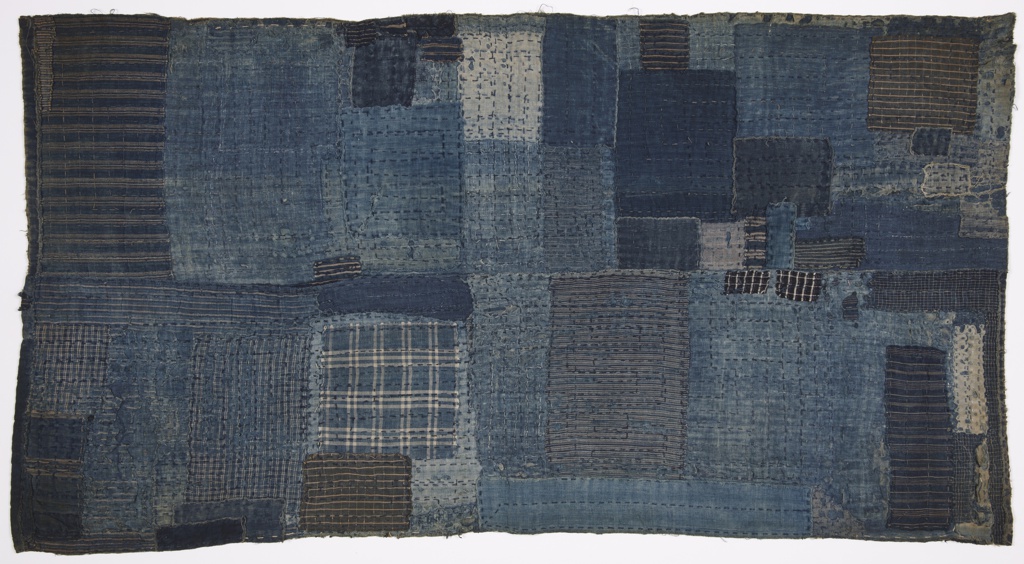 Today, indigo-dyed cotton cloth and clothing are emblematic of Japanese folk traditions. But cotton is not indigenous to Japan, and for most of Japan’s history, rural clothing was made from available plant fibers: paper mulberry, ramie, nettle, hemp, and wisteria. Cotton, which was originally introduced through Korea and China, was first cultivated in the warmer, southern and western parts of Japan in the late 15th century, and was not widely available until the 18th century. Soft, comfortable, easy to dye, and providing warmth that was unattainable with bast fibers, cotton cloth was very desirable, but remained prohibitively expensive for most people. A lively rag trade developed along trade routes, supplying cotton rags to rural farmers, fishermen and laborers. Rags were pieced and stitched into work coats, futon covers, and sleeping mats and robes. These utilitarian items were hard-used and frequently patched and mended, adding to the patchwork feeling of these items which came to be known as boro, or ragged.

This child’s boro shikimono or sleeping mat is composed of several layers of carefully arranged hand-woven indigo dyed cotton scraps. Each piece was finished at the edges, and the layers consolidated with a dense network of stitching over the entire area of the mat. Mats such as this one were used for sleeping on, either directly or as a layer placed under a futon.

← CAREERS IN COLOR: SHEPHERD COLOR COMPANY
A Miró of Your Very own →