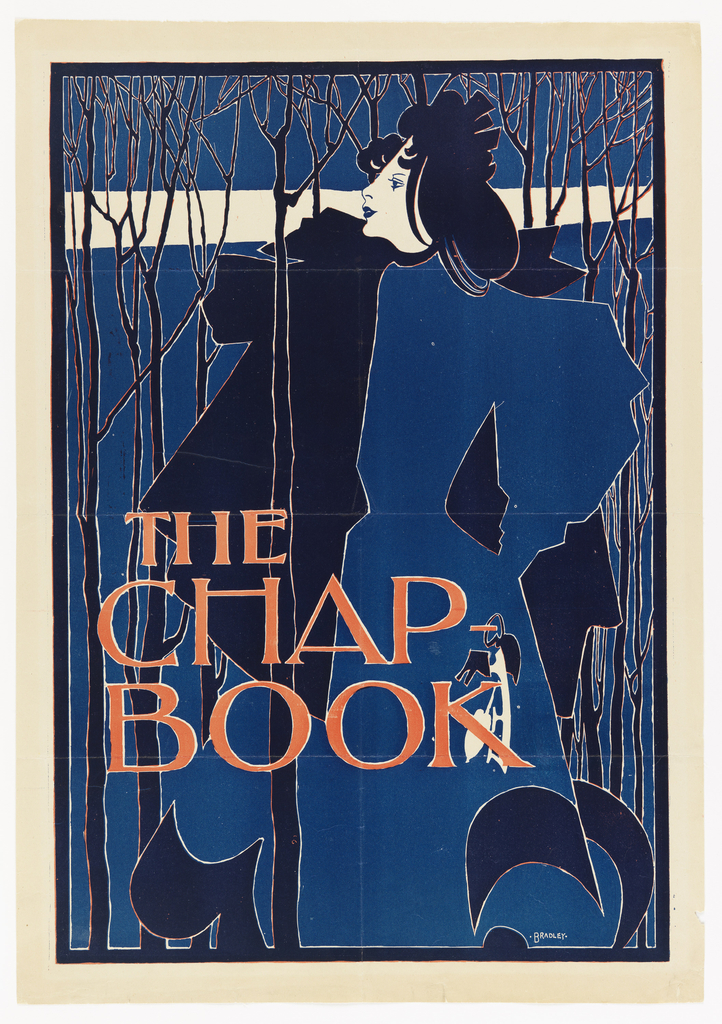 With the temperature outside at record highs this week, I can’t help but think of William Henry Bradley’s The Blue Lady. Clutching her ice skates in her left hand, she makes a cold winter’s stroll through the thin, bare trees look elegant and placid.

The Blue Lady was Bradley’s second poster for The Chap-Book, America’s first “little magazine.” The publication was conceived of by two Harvard students, Herbert Stuart Stone and Hannibal Ingalls Kimball, Jr., who graduated the year it went into production. The Chap-Book featured poetry, prose, and art from the up-and-coming members of the artistic and literary community. Bradley, who was born in Massachusetts in 1868, had worked as a printer, a wood engraver, and a typographer before establishing a career as a graphic designer.  He designed the cover of the magazine’s first issue in May 1894.

Stone and Kimball decided to to employ a commercial strategy that had become common in Europe: they produced posters of the cover illustrations of their magazine that would serve as both advertisements and as collector’s items. In addition to being hung in shop windows and on billboards, the posters quickly made their way into the homes of poster collectors in America and abroad.

The Blue Lady is a stunning example of the early introduction of the Art Nouveau aesthetic to American graphic design, but as Paul Stirton pointed out in Modern Times, part of the Morse Historic Design Lecture Series, the poster also reflects a nuanced influence of the Japanese woodblock prints from the middle of the 19th century, which had become widely circulated among collectors not only in Europe, but also in cities such as New York and Chicago.

Bradley’s design for The Blue Lady also reflects a sophisticated understanding of the lithographic printing process and indeed the flat planes of the design lend themselves to lithographic printing.  Using only two contrasting colors of ink, a sumptuous blue and a vibrant vermilion, Bradley was able to generate a third color by overprinting them, resulting in the rich, dark purple that colors the trees and the woman’s coat.  Bradley also made use of the paper itself as a fourth “color,” thereby limiting the number of plates needed to create the print and ultimately reducing production costs.

The longing for winter in the midst of summer heat must have resonated with Bradley too, for the poster was published in August of 1894!

Caitlin Condell is the Associate Curator & Head of Drawings, Prints & Graphic Design at Cooper Hewitt, Smithsonian Design Museum. Today’s blog post is a modified version of one that was originally published on January 10, 2014.

← Modernist Wall Flowers
Industrialization and Jewelry, Influences of the Machine →