The Subtle and Stylish Sophistication of the Snuffbox 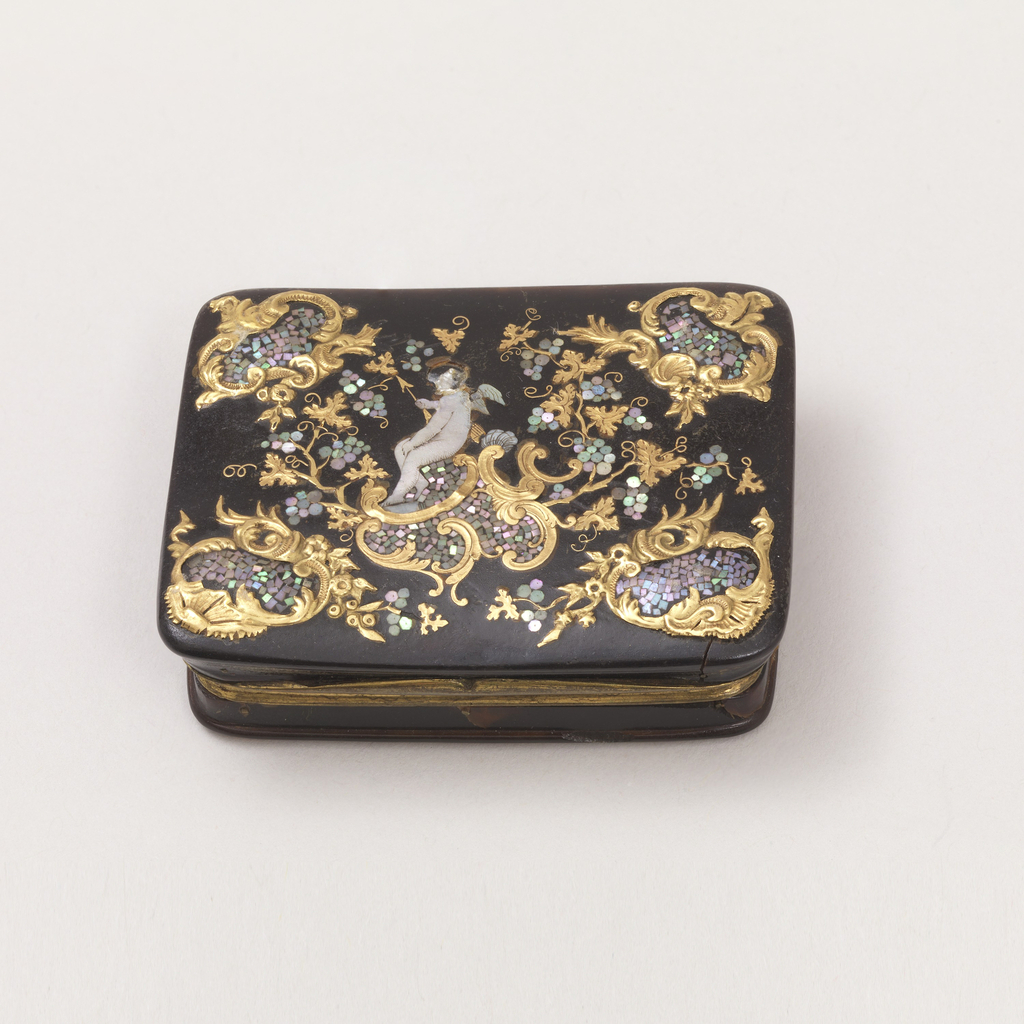 Small enough to hold in one’s palm and ornate enough to catch the eye of a passerby, this snuffbox is a combination of exquisite craftsmanship and subtle status symbol, as such containers often were in 18th-century Europe. The box is attributed to Johann Martin Heinrici, a Swiss artisan who worked at the famed Meissen porcelain factory before moving to Frankenthal, where he likely created this particular piece.[1] Tiny, carefully inlaid mother-of-pearl fragments are arranged to depict a nude male figure—likely Cupid, with small wings and a golden arrow in hand—amid chased and inlaid gold scrollwork and grapevines. The snuffbox projects a sense of sophistication, offering a glimpse of glittering opulence as it is slipped out of or into a pocket.

Early in European snuff-taking history, during the 16th century (after conquerors and explorers first arrived in the New World and returned with tobacco and accounts of indigenous peoples smoking or sniffing the substance), some European rulers and clergymen disapproved of the growing trend. However, by the early 18th century, particularly in the years following the death of Louis XIV, inhaling snuff had gained in popularity and the snuffbox entered high society as a sign of prestige. Taking snuff was elevated into a show of sophistication; the French called it “l’exercice de la tabatière.” Thus, the snuffbox became an essential part of this social grace; using the small container during the “little formal ballet of hands and fingers,” indicated that its owner was of a certain breeding and character.[2]

European rulers were known to collect snuffboxes and to give them as gifts, their purposes ranging from the diplomatic to the romantic.[3] According to a note from the donor of this snuffbox, it belonged to Count Leopold de Kolowrat, a Czech noble who received the small treasure from Maria Theresa, Empress of the Holy Roman Empire, Queen of Hungary, Croatia and Bohemia, and mother of Marie Antoinette. However, this provenance is not supported by firm documentation. If Maria Theresa did indeed give this snuffbox to Count de Kolowrat, the imagery of Cupid, who represents love, certainly supports the idea of good favor behind the present. Even if the story is a myth, this elegant snuffbox can be seen as a subtle symbol of both social stature and good will.

Jenny Shin is a curatorial intern in the Product Design and Decorative Arts Department at Cooper Hewitt, Smithsonian Design Museum, and is a 2017-2018 Hunter Mellon Arts Fellow.