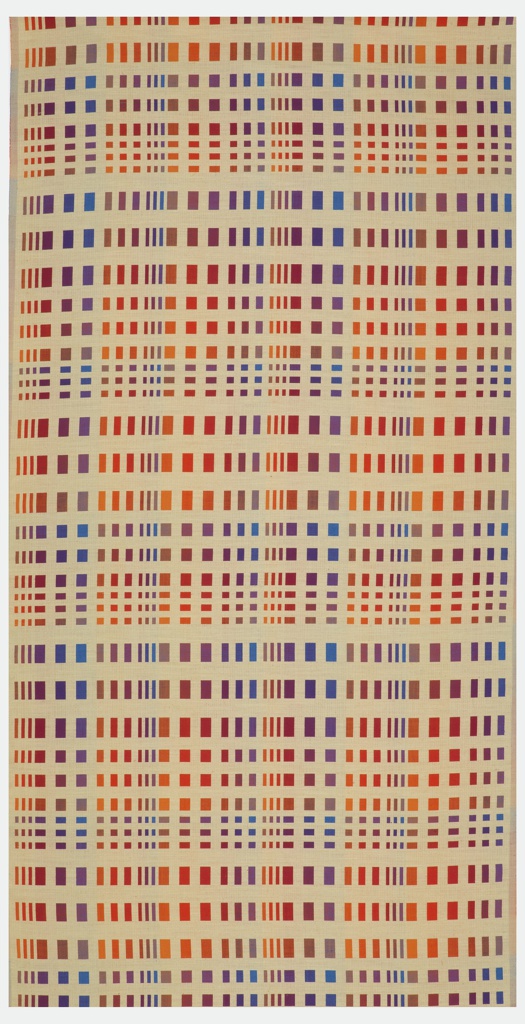 To celebrate the opening of Saturated: The Allure and Science of Color (May 11, 2018-January 13, 2019), Object of the Day this month will feature colorful objects from the exhibition. This post was originally published October 17, 2015.

Jack Lenor Larsen collaborated with artists, designers, and craftspeople all over the world. The collaboration between Larsen and Richard Landis was unique in that the two men literally designed the face and reverse of the same fabric.

Richard Landis received formal training in art and design, but was essentially self-taught as a weaver. He believed hand weaving, in particular the double cloth structure, offered him the exacting control he sought in the exploration of form and color, and he worked almost exclusively in that format to create systematic compositions of modular elements of color and geometric forms. Nucleus, also in the museum’s collection, is a superb example of Landis’s technically and aesthetically disciplined hand woven double cloth.

Landis sent Larsen samples of his weaving after seeing an exhibit of the designer’s work at Arizona State University in the late 1960s. According to Landis, Larsen responded immediately and enthusiastically. Larsen was captivated by the systematic use of color and the rigorous integration of weave structure and visual program in Landis’s double cloth. The two then worked together on a design for a commercial furnishing fabric that would become one of the company’s most successful woven upholsteries.

On the front face, blocks of color in a spectrum of 21 shades, created from 6 different color threads, appear in a repeating grid of “windows” against a solid-colored beige background. For further visual interest, the windows are of 9 different sizes, repeated sequentially. All possible color combinations appear systematically across the full range of graduated rectangles. The subtle symmetry of the geometric forms and the juxtaposition of tonalities evidence Landis’s hand in the design. But it was Larsen who chose the palette of bright, fully saturated reds, orange, blue, and violet that fit perfectly with the lively color schemes favored in interiors in the 1970s.

Larsen excelled at maximizing the visual effects of weave structures and remained committed to creating textile patterns that would be enhanced by the medium. To this end, Landis II is totally reversible. By definition, in double cloth, the second plane of threads is woven behind the primary face of the cloth and may constitute a second face. For Larsen, the reversibility of double cloth was appealing both aesthetically and commercially. While Landis was the author of the primary face of Landis II, it was Larsen who refined the design to intentionally create a fully functional second face: offset “windows’” of solid beige in a frame that reveals the transition of tones and half tones caused by the interlacing of succeeding columns and rows of colored threads. Larsen claimed that the “patterned plaid” face of Landis II was at least as popular with his clients as the original face of the fabric. “Of all fabric structures,” Larsen once said, “double cloths are my favorites.” “I love the visual pun of their interlacing.”

← Macro Micro Marks
A Vision of the Future →