Revisiting Rivera in the Eighties 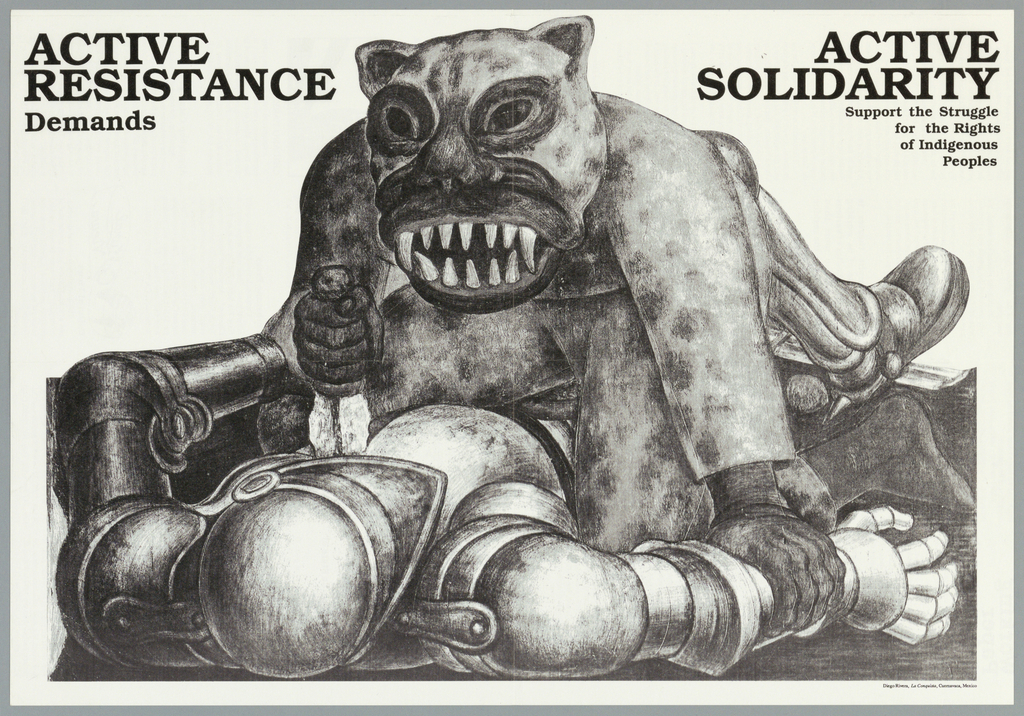 This bold graphic work combines text and image in a call for solidarity with indigenous populations and resistance to their continued subjugation. Dominating the print is a depiction of a fearsome Aztec warrior, clad in a traditional jaguar costume and stabbing a prone Spanish soldier. Designer Lincoln Cushing (American, b. 1953) appropriated the image from famed Mexican muralist Diego Rivera’s fresco cycle, History of the State of Morelos: Conquest and Revolution (1930) at the Palacio de Cortés in Cuernavaca, Mexico. It is part of a scene from the north wall depicting the Spanish invasion of Mexico in the sixteenth century.[1] While the Spanish were ultimately victorious, this scene depicts a moment of resistance in the face of imperialist aggression.

Cushing’s reproduction of Rivera’s image serves as the cover of the Summer 1989 Western Regional Bulletin of the Alliance for Cultural Democracy, a national network of activist arts groups active from 1982 to 1994. Rivera is credited in the lower-right corner. The pamphlet was printed at Inkworks Press, a small nonprofit in Berkeley, California which published posters and leaflets for social justice organizations.[2]

In addition to working in design, Cushing is a librarian and archivist who has written extensively about political posters, notably Cuban posters from the 1960s through 1980s.[3] His interest in twentieth-century Latin American activist printmaking is clear in this work, which draws its style and content from the enduring legacy of the Organization of Solidarity with the People of Asia, Africa and Latin America (OSPAAAL) in Cuba, and the Taller de Gráfica Popular (TGP) in Mexico. Both producers of graphic art in support of revolutionary reform, OSPAAAL and TGP published large bodies of print work with strong encouragement for oppressed groups and social change. TGP in particular played an important role in the construction of a Mexican post-revolutionary identity and became a model for activist print workshops both in Mexico and abroad.[4]

By appropriating Rivera’s image, Cushing draws upon a rich Latin American history of politically engaged muralism and graphic art, to address the social justice concerns of his own time and place. He uses the arresting quality of Rivera’s scene of Aztec resistance to draw attention to the continued oppression of indigenous people in the twentieth century, calling for solidarity and protest.

This post was written by Maeve Coudrelle, Curatorial Assistant in Latino Design.

← Topographies: “Landscape on the Wall”
A Fashionable Parade →