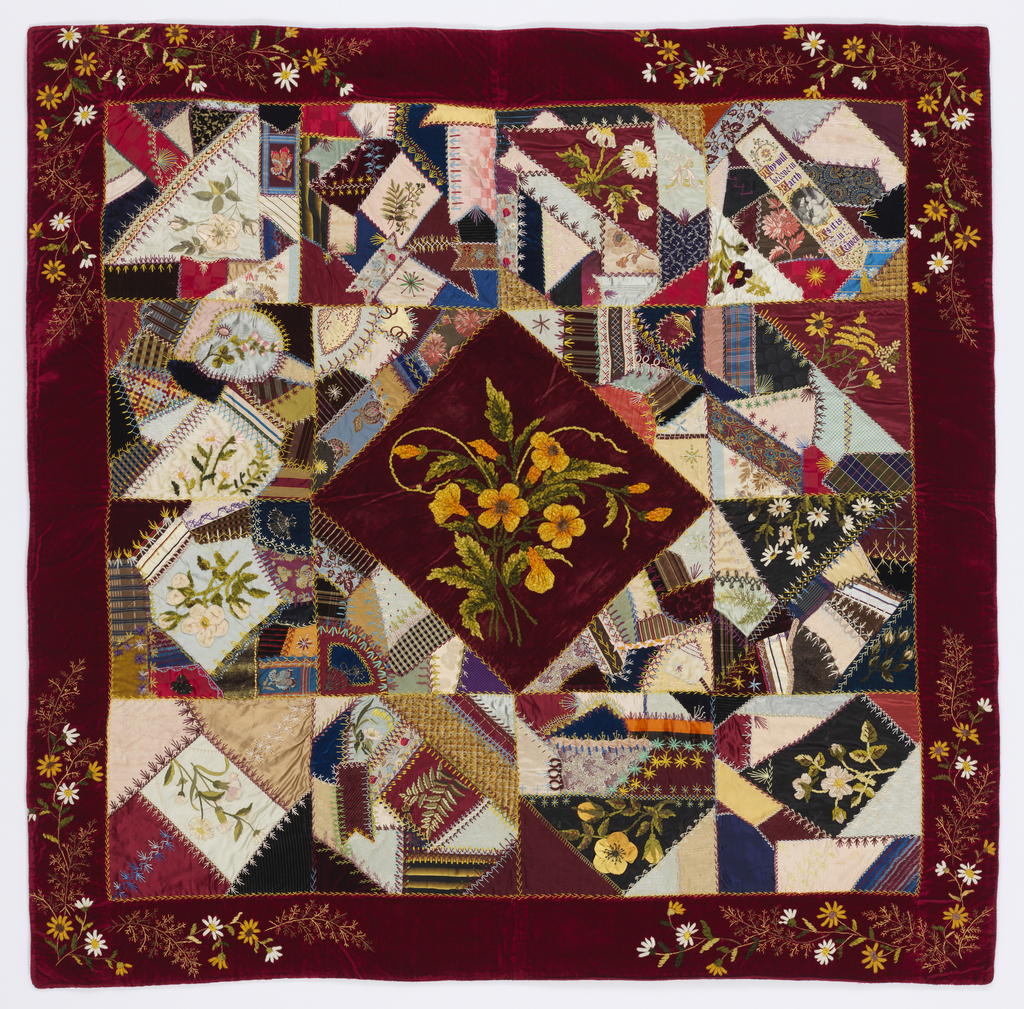 Posted by Jeffery McCullough on April 4, 2018

Cooper Hewitt is fortunate to have in its collection two quilts made by close relatives: Caroline Hammond Reed and her daughter-in-law, Frances Kingsley Reed, from Anderson, South Carolina. Both quilts were donated by Helen Allen Stanbury, a New Yorker who was a native of Anderson.

Frances Kingsley Reed (1845–1902), wife of Caroline Hammond Reed’s son Clifton, chose the popular “Crazy Quilt” pattern for her elaborate contribution to the family’s quilting legacy. In the 1870s or ’80s, when this quilt was made, crazy quilts were nearing their height of popularity, which was in the 1880s and ’90s. Crazy quilts, which are characterized by their irregularly shaped pieces and lack of strict geometric pattern or color scheme, can be made as a single large rectangle or assembled from smaller squares. Reed’s version comprises twelve squares surrounding a large center square composed of four triangles and a diamond-shaped velvet medallion that is embroidered with a flower. Not a bed-sized quilt like her mother-in-law’s, Frances’s intricate embroidered patchwork quilt of silk, chenille, velvet and ribbons was meant for display. “Intended as throws for the parlor rather than as bed quilts, [crazy quilts] were conceived and judged not by overall composition but by richness of detail, achieved with extensive embroidery… built up three-dimensionally with appliqué and stuffing.” [1]

The dominant motif of Frances Reed’s work is naturalistic flowers, but a very personal touch was added to one square that features a ribbon with a portion of The Lord’s Prayer: “Thy will be done on earth as it is in Heaven.” It is not uncommon for quilts of this time to include a reference to one’s personal life amongst the generic and often used themes.

In 2016, when the New York Historical Society put recent quilt acquisitions, including one very similar to Frances Reed’s quilt, on view as “Threads of Women’s History”, the wall text read: “Monuments don’t have to be big. Nor do they have to be made of metal or stone. Though textiles are fragile by nature, the examples on view were meant to endure. The word ‘monument’ comes from the Latin monere, ‘to remind.’ And, passed along as they were through generations, these needlework objects indeed reminded their descendants of the women who made them.” While we don’t know how many generations of the Reed family enjoyed the work of Caroline Hammond Reed and Frances Kingsley Reed, the two examples of their talent that are now part of Cooper Hewitt’s collection serve as monuments to the women of the Reed family of South Carolina.