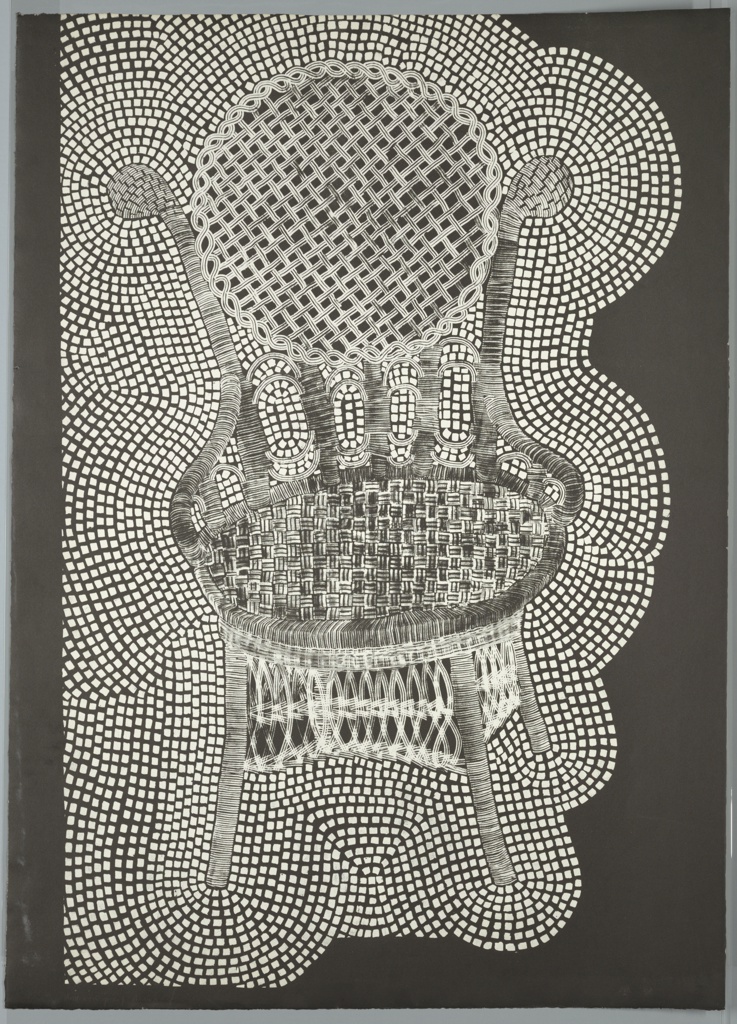 In 1946, the twenty year old artist Ruth Asawa entered the renowned, experimental Black Mountain College, where she studied for three years under mentors such as Josef Albers, Merce Cunningham and Buckminster Fuller. Born in California to Japanese immigrants, Asawa spent her childhood working on her family’s farm, until 1942, when the entire Asawa family were sent to internment camps. It was during this period that Asawa began to draw; some of her fellow internees were animators for Walt Disney Studios and taught art in the camp. Asawa’s incarceration period lasted eighteen months, and upon being restored her freedom she pursued her fine art talents.[1] At Black Mountain College, Asawa embraced the school’s tenets of progressive arts education and discovery; Josef Albers’ design courses taught Asawa to explore diverse materials and the relativity of perception. Albers also introduced Asawa to a Mexican looping wire technique, which eventually became the foundation for her celebrated, sinuous wire sculptures.[2]

Despite the fact that Asawa is more frequently remembered for her intricate, three-dimensional works, her art training was primarily in design and drawing. In 1965, Asawa began to experiment with lithographs, after Albers recommended her for a fellowship at the renowned Tamarind Lithography Workshop in Los Angeles. Founded by the artist June Wayne with a grant from the Ford Foundation, Tamarind ventured to preserve the art of lithography and teach its techniques to young artists.  With the rise of Abstract Expressionism, lithography fell out of popularity in the United States in the 1940s and few resources were available to potential printmakers. The Tamarind Workshop became an eminent lithography studio, training artists Ed Ruscha, Miriam Schapiro, Herbert Bayer, among many others.[3]

This lithograph, Chair, in Cooper Hewitt’s Drawings, Prints, and Graphic Design collection, is one of the works Asawa printed in the Tamarind Workshop in the mid-1960’s. A woven chair is printed in white ink on a black background, while an abstracted shadow of white squares floats behind it. Asawa depicts the chair in detail, with each woven area illustrated slightly differently; the splat of the chair has a wider, lattice pattern, while the seat has a tightly woven cane. The juxtaposition of the chair, the graphic silhouette and the solid black background creates a visually complex image that solicits a closer look from the viewer. Furthermore, the print’s fine lines and monochrome inks echo the subtle complexities in Asawa’s wire sculptures. Explorations of perception, pattern and natural forms are threaded through Asawa’s diverse oeuvre and reveal her ability to seek creativity in any environment.

Lily Gildor is a textile artist and a design writer. She received an MA in the History of Design and Curatorial Studies from Parsons in 2019.

← Out of the Cobwebs
The Ability Project: Empowering People with Disabilities Through Design →

Why are there no dimensions shown for this piece? I often wonder about the scale of the objects shown in “Object of the Day” but they aren’t always given…seems weird as it is important to the understanding of how something has been made.

If you click on the collection record number in the right hand column, it will take you to the object’s collection page. You will find the dimensions and other details there.