Wizardry for the Wall 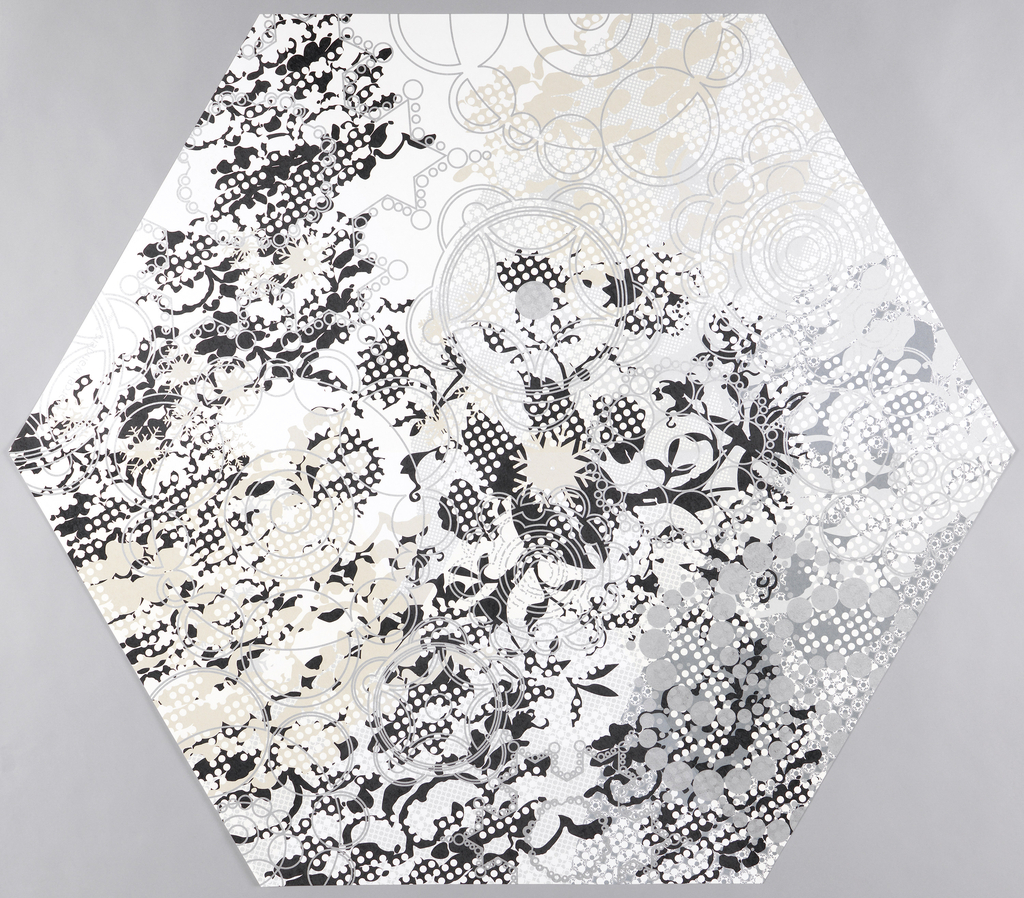 This beautiful sidewall tile by Marcel Wanders overwhelms with its variety of details. The pattern features layers of circular motifs, snowflakes, stars, and dots on a complex floral curvilinear design. When the tile is repeated along a wall as intended, the overall effect is dazzling and makes the wall seem made of lace. This effect can be seen in two interiors done by Wanders where the wallpaper is used, the Thor Restaurant designed for the Hotel on Rivington in New York (2004) and a room in one of his seven Lute suites, luxury hotel rooms built in 18th-century cottages in the Dutch village Ouderkerk aan de Amstel (2005). Wanders has designed multiple wallpapers, and his work overall is rich in ornamentation and patterning. Part of a generation of Dutch designers who rejected the intensely modernist philosophy taught at Dutch design schools in the 80s and 90s, Wanders consciously embraced a design process focused on theater, fantasy, and telling narratives. Speaking of designers, he once said “Our audience expects more from us. We cannot be engineers, we cannot only be smart; we have to be life poets, we have to dream wonders, we have to be majestic magicians.” Wanders sees his work as intensely humanistic, focused on satisfying the natural human delight for sensorial and emotional stimulation and attraction to the fantastic, the dream-like, and the deeply personal.

While his work shares some of the rationalism and interest in technology typical of modernism and the historical and cultural awareness typical of postmodernism, he rejects both labels. He believes modernism to be too programmatic, obsessed with functionalism, and focused on the needs of the machine at the expense of human needs. “We can no longer use humanity to serve technology,” he says, “we have to use technology to serve humanity.” On the other hand, postmodernism’s cynicism and fragmented view of human nature and society has no place in Wanders’ optimistic vision of humanity’s future. It is perhaps with the Arts and Crafts movement that Wanders feels the closest affinity, admiring the movement’s attempt to preserve the sense of human touch and emotion in an increasingly machine-driven world. His sense of theatricality and view of new technology as a tool for unrestrained creativity also places him in affinity with the Art Nouveau movement.

Ultimately, Wanders sees his work as focused on the human. Design for him is “able to touch humanity in a subtle and caring way and guide it to unprecedented new heights.” His embrace of ornamentation seen in “Hexagon” reflects this desire to register the human element in everything he makes. Likewise, the paper shows his willingness to work both with luxury, limited-edition objects and with more accessible objects. Originally made as part of his limited-edition Personal Editions label, it is also mass-producible. Its shape allows for it can be rotated as desired, allowing for larger input from the client. “Hexagon” ultimately reflects his desire to make objects that customers would feel reflected them and that they would bond to. “So many people notice design only when it fails,” Wanders says, “It is my task to make them love it when it works.”

Nicholas Lopes is a graduate student in the History of Design and Curatorial Studies program offered jointly by the Parsons School of Design and the Cooper Hewitt, Smithsonian Design Museum. He is a Fellow in the museum’s Wallcoverings Department.