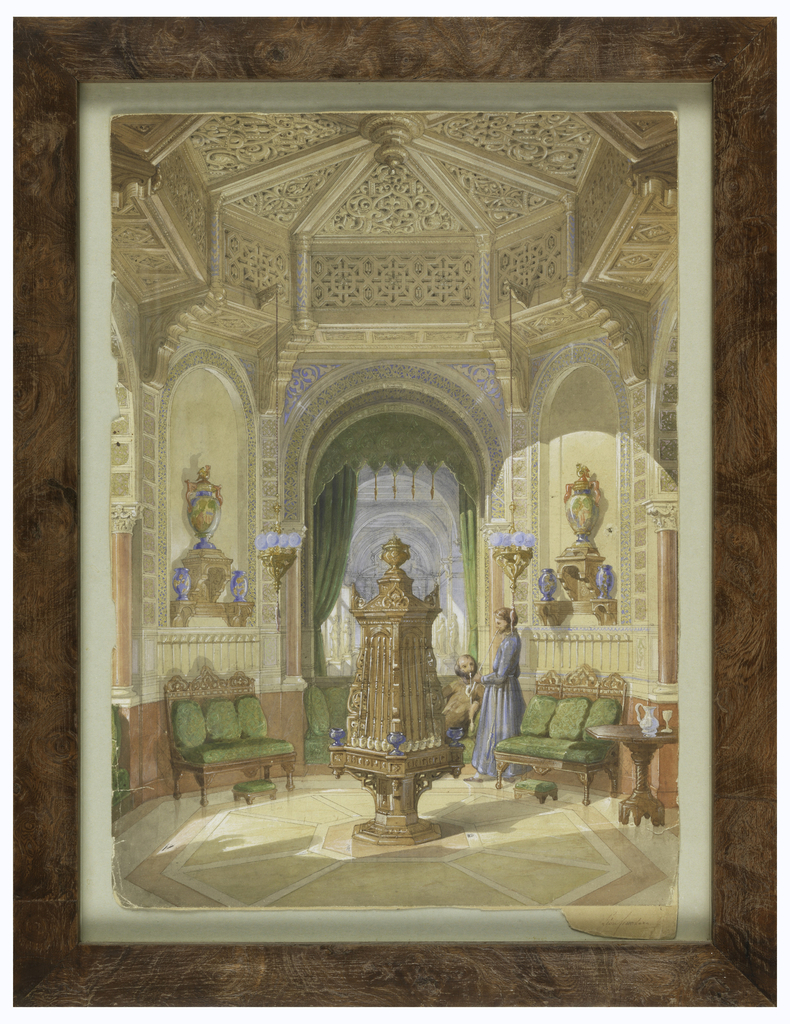 Design for a Smoking Room by French architect and set designer Léon Feuchère (1804-1857), a recent addition to the Thaw Collection, is a relatively early example from nineteenth-century European vogue for themed domestic interiors.  The scene shows an octagonal space whose walls and domed ceiling display pseudo or tromp l’oeil Moorish filigree plasterwork with arched openings presumably on four sides. The central arch leads to a receding colonnade while lateral arched niches display two large urns of Western neoclassical form with exotic painted decoration.  Beneath the side niches are Turkish-style settees covered with French mid-nineteenth century fabric.  A large neo-gothic pipe stand occupies the center of the kiosk and an octagonal table sits to the right.  Barely noticeable amidst the room’s richly patterned surfaces and furnishings is a man reclining on a central ottoman smoking a hooka, attended by a male servant to his left.

Feuchère must have thought highly of his design as he incorporated an engraving after it in his publication, L’art industriel.  Recueil de dispositions et de décorations intérieurs, comprenant des modèles pour toutes les industries d’ameublement et de luxe.. Plate 68, Tabagie. Intending this book to be a source for decorators as well as artisans, the designer organized the illustrations around a fictitious country house of H-shaped plan with rooms and furnishings decorated in different styles, including all the Louis, Byzantine, Islamic, and Chinese.  The Moorish Smoking Room is proposed as one of the ground floor pavilions; the Petit Salon, a composite of Henri IV/Louis XIII and Louis XIV, is in the opposite pavilion; the Grand Escalier is in the Louis XIV style; while the Salon de Spectacle was to be in Louis XV.  One wonders if publications such as this, with examples of themed interiors, might have sparked the concept of individually themed interiors within the same house, a fashion that only came to fruition in the last decades of the nineteenth century.

← In Service to the King
To Entertain and Delight →