When the Artisanal & Industrial Collide 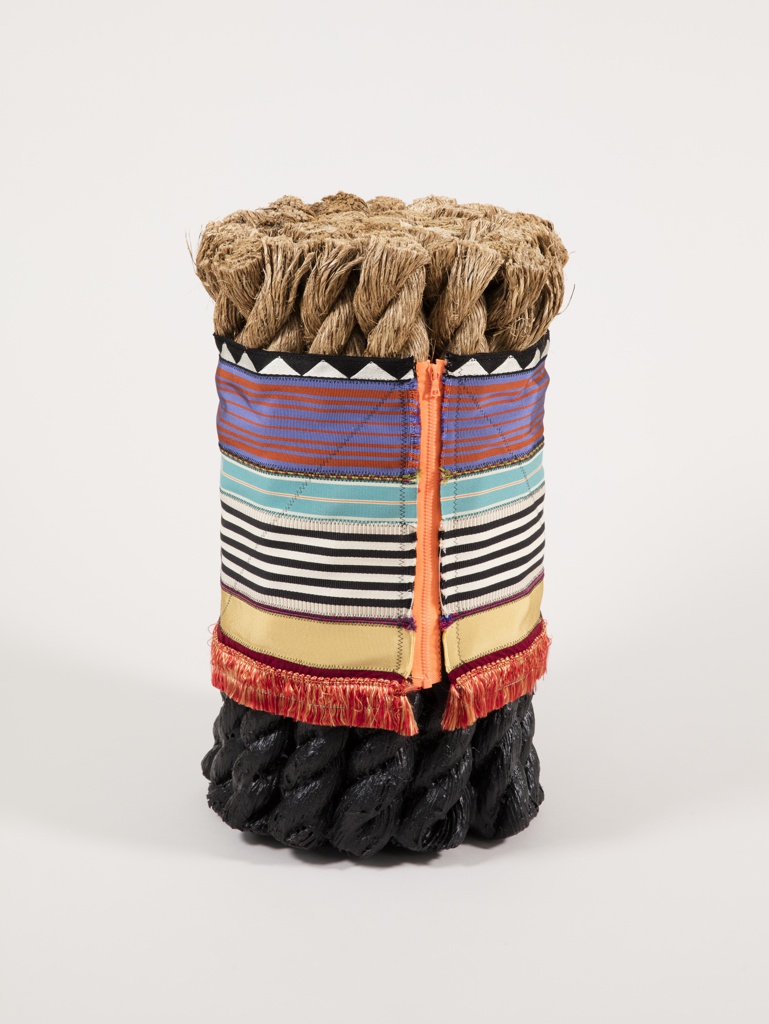 New York-based designer Stephen Burks is known internationally for his innovative synthesis of industrial manufacturing and hand-made craft traditions.[1] He has collaborated and consulted with numerous high-profile international design brands and manufacturers, including Cappellini, Dedon, Ligne Roset, Missoni, Roche Bobois, and Swarovski, among others. Through Aid To Artisans, Burks has also partnered with craftspeople in South Africa, Colombia, India, Senegal, Rwanda, Kenya, Ghana, Indonesia, the Philippines, and Haiti. He has been called a “design activist,” and affirms his dedication to, “the socioeconomic and even political transformation of culture through design.”[2]

Roping Stool is a collaboration with Italian fabric house Dedar Milano’s co-creative directors, brother and sister Caterina and Raffaele Fabrizio.[3] The stool features Manila rope dipped at its base in black rubber, and wrapped in brightly-colored patterned fabric. By sourcing Manila rope—from the abacá plant native to the Philippines—and working with an established high-end brand, Burks allies raw material and artisanal craftsmanship, with functionality, luxury, and modern technology. He also promotes sustainability, by re-using production waste like upholstery trimmings in his design.

On his education, Burks asserts, “I have a very Modernist background. I never thought there would be this substantial return to the hand for me. It’s interesting that my Modernist background allows me to mix high and low ways of making for mass and luxury, while still remaining culturally connected.”[4] While Burks may have been trained to embrace the machine-made aesthetic of modernist design, his current practice brings the handmade back into play, pairing the artisanal with the industrial. Instead of eschewing one in favor of the other, Burks creatively combines the mass production made possible by industrialization with the expert craftsmanship that preceded these advances in technology, and that continues today in certain parts of the world.

Burks is the first African American recipient of the Cooper Hewitt National Design Award in Product Design (2015), and the first industrial designer to have a solo exhibition at the Studio Museum in Harlem (2011). On receiving the Cooper Hewitt National Design Award, Burks stated, “It’s very important that the award acknowledges a body of work like mine and breaks down the exclusivity of the design world in general. As the first African-American to win in product design, I hope to continue to open doors in design for many younger people of different backgrounds.”[5]

Maeve Coudrelle is a Curatorial Assistant in Latino Design. This post is elaborated from an entry in “Looking for Design,” a series exploring work by Black and Latinx designers in the collections of the Cooper Hewitt and the National Museum of African American History and Culture.