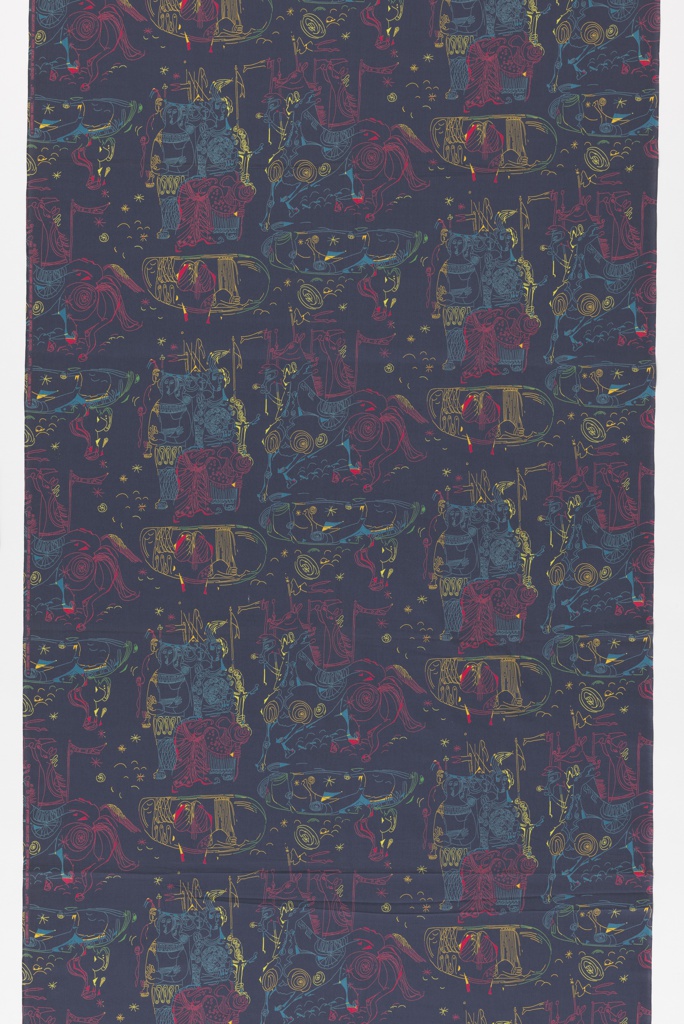 In 2005, The New York Times reported that expressionist artist Vincent Malta, age 83, was beginning to achieve success in making a living as an artist.(1) A longtime teacher at the Art Students League of New York whose paintings appeared in galleries from time to time, Malta filled the gaps in his showing career by taking on commercial work. Among his projects were a handful of textile designs, produced by Signature Fabrics in the early 1950s. Associated American Artists, the organization behind the artist-designed textile initiative, would go on to show Malta’s artwork in its gallery in 1955.

Malta counted Vermeer and Rubens among his aesthetic influences, and the immediacy of the Baroque is clear in his action-packed Iliad design from 1953. Malta reimagined the epic story of Troy in fantastical line drawings and an incongruous palette of neons that would have been at home in the early ’90s. Tableaux of chariots, horses, warriors, and rulers recall the artist’s semi-abstractionist paintings.

Iliad was embraced by the era’s sportswear companies. Bunny’s Casuals of Miami, Rattet & Jon, and Sue Mason Jr. by Saba of California are among the designers who fashioned the fabric into classic 1950s full-skirted silhouettes.

Malta continued to paint from his home, which doubled as his studio and gallery, in the Bensonhurst neighborhood of Brooklyn. He lived for a decade beyond the Times’ announcement of his late-in-life success.

← Preview the future!
Food for Thought →