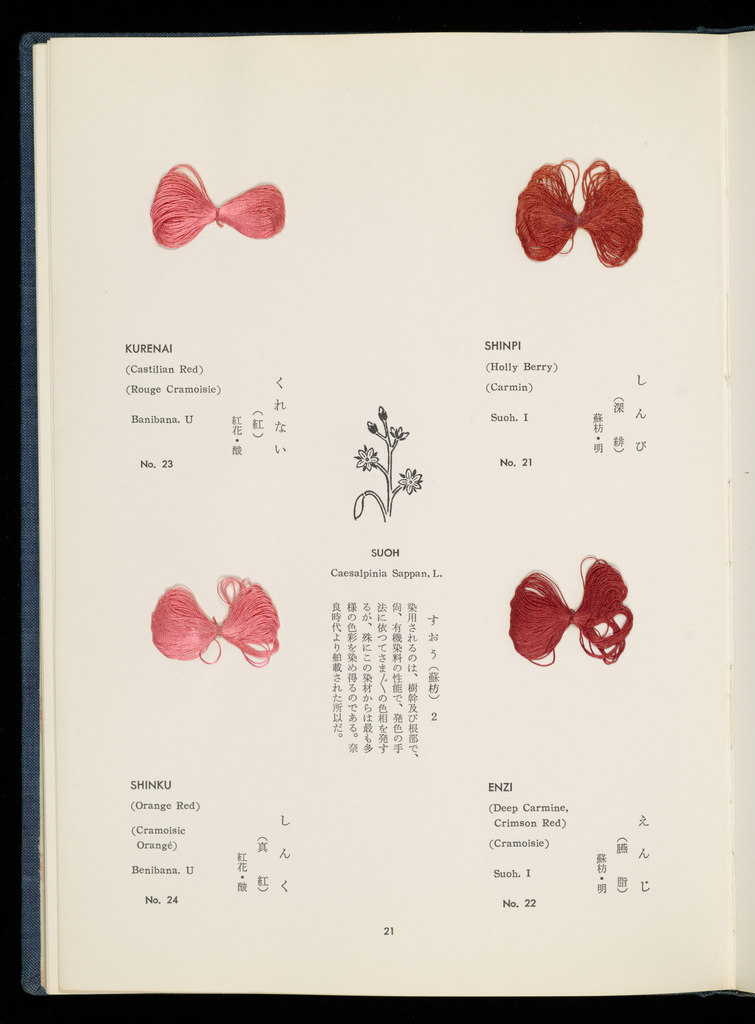 This is a page from the book The Japanese Art of “Kusaki-zome,” Nippon Colours: Dyeing in a Hundred Colours with Juices of Plants and Grasses, by Akira Yamazaki, grandfather of my colleague Kazuki Yamazaki, who is, along with his father, Seiju Yamazaki, among the foremost authorities in Japanese natural dyeing and color science. The page shows four bundles of silk threads dyed with natural plant materials in shades most favored in Japan, historically researched by Akira Yamazaki through literary references. Akira Yamazaki was a well-known scholar and a literatus of the Meiji and Taisho eras and became interested in colors through his study of ancient literature. The focus of the book is to shed light on the Japanese color palette and color names that match dye plants mentioned in literature and in ancient official documents.
The knowledge of natural dyeing was rapidly lost when Japan opened its doors to the world. After the new Meiji Era began in 1868, an influx of Western goods, technology, and culture came into Japan. The Japanese were thrust out of the feudal society into the modern age. Chemical dyes were embraced as the latest technology in textile production, eradicating natural dye practices, except indigo, which held on among traditional dyers. Akira Yamazaki related to Kazuki that without the continuing practice of Chinese herbal medicine in Japan, he would not have been able to take on the natural dye research. He coined the term Kusaki-zome meaning dyeing with plants and grasses to differentiate it from chemical dye practice. He published a book with the same title in Japanese in 1958 while undertaking the tri-lingual publication of The Art of Kusaki-zome seen here (in Japanese, English, and French).
The threads on the upper and lower left are dyed with benibana (safflower) Carthamus tinctorius. The color of the upper threads is Kurenai (Castilian Red), and the lower is Shinku (Orange Red). This shade of warm red with beni dye should give a good indication of what the red in Cooper Hewitt’s under-kimono would have been if the fabric were dyed in natural beni dye instead of chemical red.
The threads on the upper and lower right are dyed with suoh, Caesalpina Sappan L, a flowering tree that produces a valuable reddish dye called brazilin, which is used for dyeing fabric as well as making red paints and inks. The color of the upper threads is Shinpi (Holly Berry), and the lower is Enzi (Deep Carmine, Crimson Red).
The sketch in the middle of the page is of the flowering tip of suoh. The Japanese text below the sketch explains that the Sappan wood’s bark and roots yield red dye that manifests in one of the widest variety of shades depending on which auxiliaries are used in the dye process. This may be the reason why Sappan wood has been imported to Japan continuously since the Nara Period AD 710 to 794.