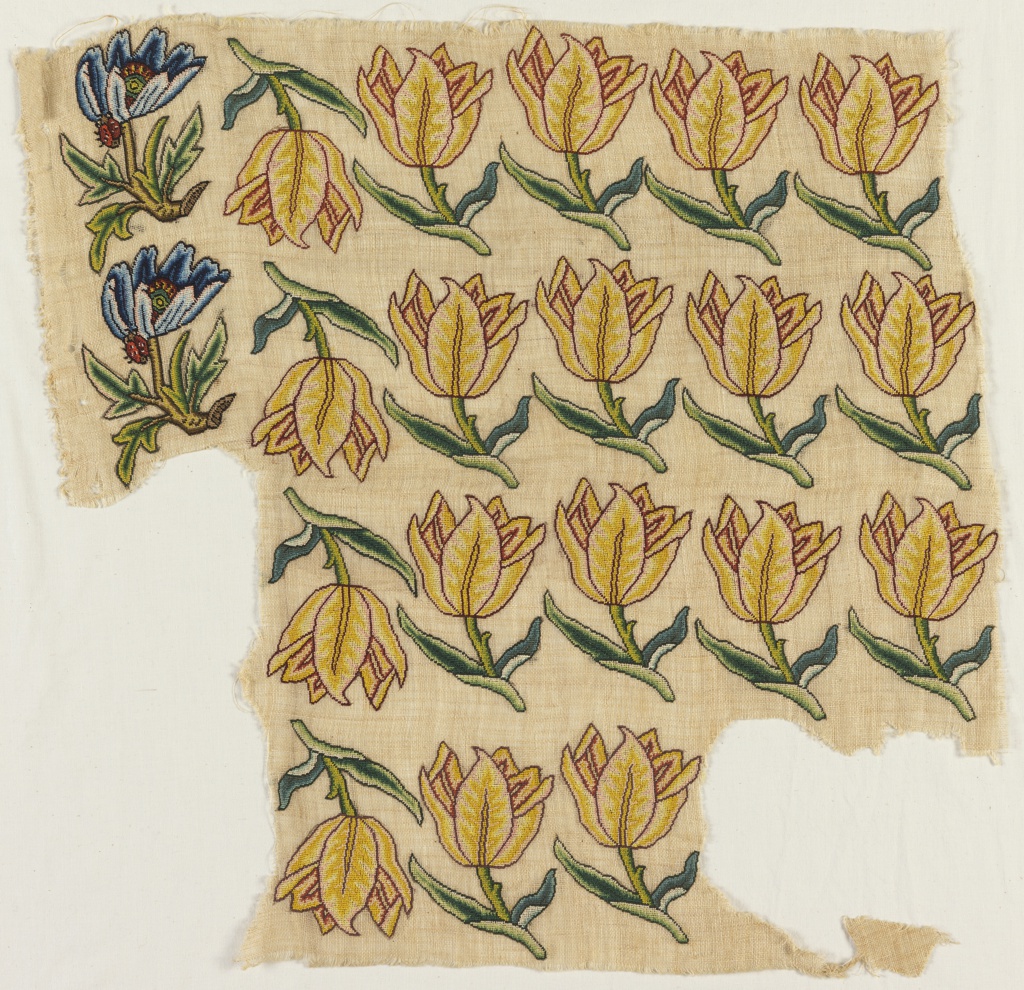 The creation of this panel of embroidered flowers was just the beginning of a much larger interior decoration project. The individual flowers were embroidered in silk thread on a linen foundation fabric in a technique called tent stitch (known simply as “needlework” in seventeenth-century England). The “pixilated” appearance is the result of the embroiderer using the woven linen grid as a guideline for the work; each diagonal stitch covers the intersection of one warp and weft thread. When all of the flowers were finished, these and any other embroidered motifs would have been cut out and rearranged on another textile foundation- probably a colored silk satin or velvet. Then the edges of the flowers would have been carefully outlined with a narrow silk cord, or shiny metal thread. This finishing touch served the dual purpose of hiding the stitches used to attach the flower to the silk or velvet, and to emphasize the flower itself. The combination of vivid, multicolored plants on a rich textile background gave the impression of a luxurious and carefully planned garden brought indoors.
Individual flowers like the tulips and cornflowers seen here were called “slips” and their design was based on botanical drawings and prints of the period that accurately depicted the petals leaves and stems unique to each species. The addition of the ladybug (or “ladybird” in British English) on the blue flowers also references botanical works, which often included the insects that pollinated or consumed the relevant plants.
The fact that tulips feature prominently is not surprising as this species of flower reached a height of popularity and cost during the early seventeenth century that is hard to comprehend today when cheap tulips are sold on any street corner in New York. In the 1630s, tulips bulbs were traded as a commodity by financial speculators, and fortunes rose and fell dependent on their fluctuating value. They were planted in formal English gardens widely spaced so that each one could be admired, rather than in a dense mass that is popular today. These particular golden yellow tulips appear to be a variegated, or striped variety- not your average garden variety tulip.
The most ambitious compositions of needlework motifs also included human figures, animal, birds, and trees in addition to garden flowers. The finished fabrics have the appearance of a collage, and were used for any number of household furnishings: decorative cushions, chair covers, and even sets of bed hangings. Today the most impressive repository of this kind of work is preserved at Hardwick Hall in Devonshire. Some of the oldest pieces were created in the late 1500s.[1]
While we will never know exactly how these flowers were meant to be used, unfinished textiles like this are valuable–not to mention tantalizing–for what they can tell us about historical process.

Melinda Watt is a curator in the Metropolitan Museum of Art’s Department of European Sculpture and Decorative Arts and Supervising Curator of the Antonio Ratti Textile Center.