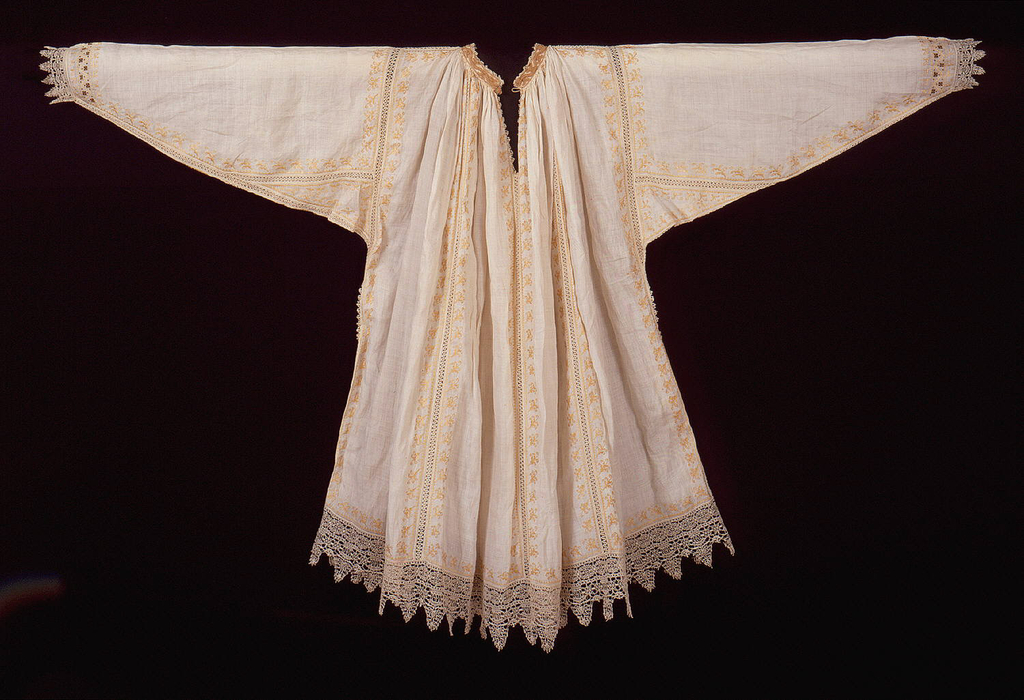 This remarkable alb, dating to the end of the 1500’s and early 1600’s was found in the attic of the Corsini Palace, a monumental Baroque residence on the banks of the Arno river in Florence, Italy. The palace was acquired from the Medici by the Corsini family in 1649 and by the end of the 17th century had been enlarged and turned into one of the grandest homes in Florence. The residence, which continues to be owned by the family, is a treasure trove of extraordinary art, painting, sculpture and almost every imaginable object in the decorative arts. Its contents, including textiles, were carefully stored, aired and preserved thus it is not surprising that this almost 400-year-old garment has survived in pristine condition.

An alb is a liturgical vestment worn over a cassock and under a dalmatic or stole. It is generally plain with long sleeves and adorned on the hem. This alb is made of extremely fine bleached white linen and has been exquisitely embroidered in a variety of techniques using a heavy unbleached linen thread. The collar is embellished in a distinctive raised work technique known at the time as “ punto in aria,” while the body and cuffs are embroidered with satin and stem stitches in a diagonal leaf pattern. The sleeves and body are also adorned with narrow bands of cut work. Both the cuffs and hem are trimmed with geometrically patterned bobbin lace; the deep four and a half inch lace on the hem being made up of two bands with attached points. Both the embroidery and lace can be associated with work of Spain and Portugal c. 1600.

In the early 1990’s when the family decided to turn the house into a venue for events they sold off some of their finery. As a dealer, I was lucky enough to attend…the greatest “garage sale” of my time and purchase this alb, which is now in the permanent collection of Cooper Hewitt, Smithsonian Design Museum.

Titi Halle is the owner and director of Cora Ginsburg LLC, a New York gallery specializing in European and American historic costume, textiles and needlework of the 16th-20th Century.