Harmony in the Work of Byung Hoon Choi 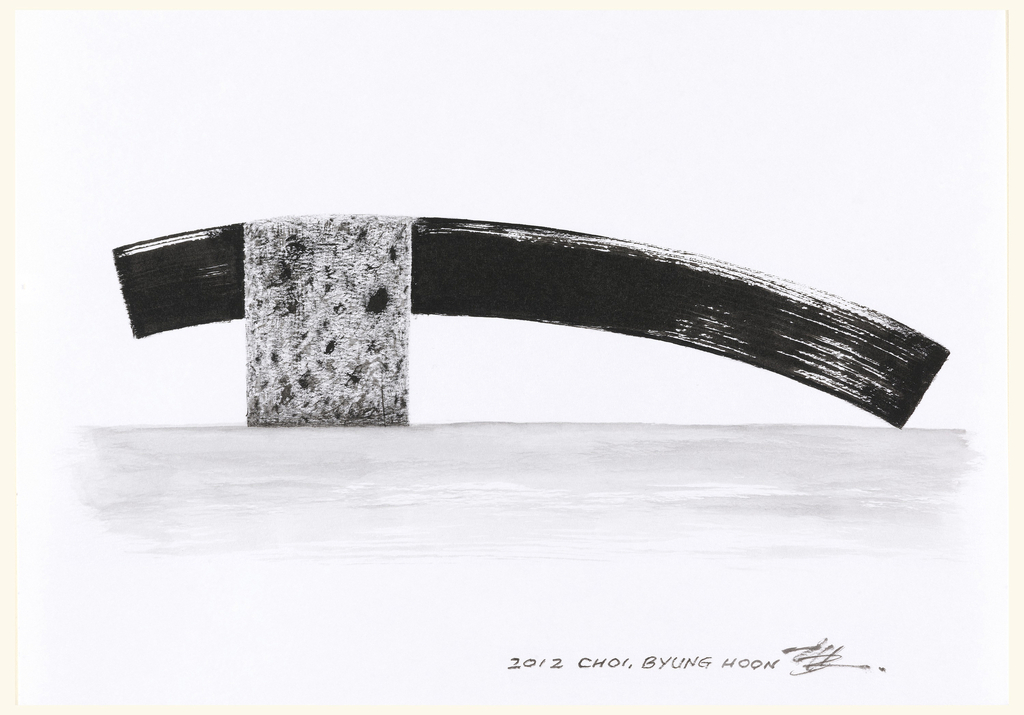 Elegant contrast is the defining characterstic of Korean sculptor, artist, and furniture designer Byung Hoon Choi’s body of work. This delicate black ink and gray wash drawing is no exception. The opposing forms, textures, and colors of the two geometries in this preparatory sketch for a bench produce a meditative composition echoed in Choi’s final design.

Choi is known for melding traditional Korean design with modernist ideals to create tranquil yet functional works of art. This example is a preparatory drawing for a bench executed in polished and raw basalt stone. The bench, which is part of his “In One Stroke” series, bears the title afterimage of beginning 013-392. The name “afterimage” is one Choi uses frequently in his work. In an interview following his recent solo show Water Meditation at Friedman Benda gallery, he explains the origin of the “afterimage” name: “For me, ‘afterimage’ means a mysterious encounter in the imagination with the world I have not experienced. The world of imagination leads me to the creative impulse, which becomes a driving force leading me toward the unknown world.”²

The sublime nature of Choi’s aesthetic inspiration has roots in his expressed connection to Zen Taoism. Taoism centers on paradox: the greatest form of enlightenment in this Eastern philosophy comes from the harmony of unifying differences.³ In the case of the afterimage bench and in much of his work, Choi integrates a seemingly oppositional heritage of traditional Korean design with modernist ideals of simplicity and humanism. The bench’s carefully balanced horizontal form recalls the ancient megalithic Dolmen tombs of the designer’s native Ganghwa region. Though inspired by indigenous Korean architecture, the bench has a universal timelessness in its simple square base and swift arc shape, which Choi explains was inspired by the singular stroke of a paint brush.⁴ Choi’s ability to reconcile his distinctive design influences into a clean solution is in keeping with his Taoist principles.

Choi continues to seek the balance of variance in his choice of materials. In this drawing, he uses contrasting textures and colors of paint to highlight differences, yet keeps the sketch monochromatic to unify the composition. Choi maintains a similar approach in the physical bench by choosing smooth polished basalt for the arc and leaving the stone in its rough-cut form for the support. Though the design uses contrasting textural qualities, these oppositions create an effect of harmony.

To Choi, the combination of the modern and the traditional, the real and the meditative, the smooth and the rough, reach toward something higher: “My artwork therefore allows us to reflect as we reach universal values, by creating the real space of seon [known as zen in the west] through the vestiges of objects and its thoughts.”⁵

Julia Vennitti is a Peter A. Kreuger intern in the Digital and Emerging Media Department at Cooper Hewitt, Smithsonian Design Museum.

← Squared Up
Souvenirs of the Grand Tour →