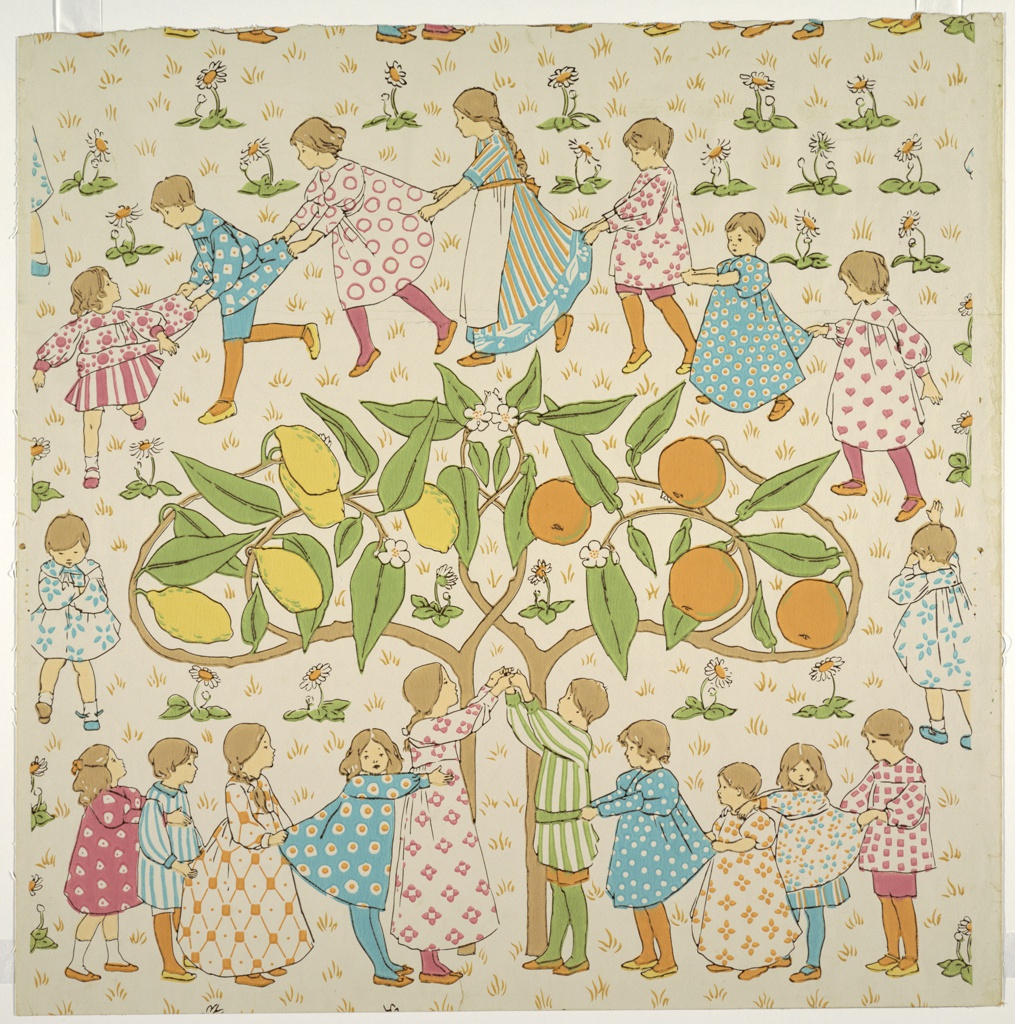 This delightful sidewall for a nursery is the work of Dorothy Hilton, a late Victorian designer of which sadly little is known. She was based in Birmingham and had a sister Agnes who was also a designer. Articles in the Studio record that she exhibited at the 1899 National Competition of the South Kensington schools and the 1903 Arts & Crafts Exhibition at the New Gallery. These articles praised her for her work, which included drawings of children and animals, designs for stained glass, and at least one other design for a nursery wallpaper called Banbury Cross. In a 1902 article in the Art Journal on new wallpapers, Oranges and Lemons was specifically singled out as an excellent design particularly for its color scheme and treatment of its figures. Referring to Hilton and this paper, the journal’s description ends “This young artist, if she follows up her present success, should have before her a brilliant career as a designer.” Sadly, it seems the paper’s prediction did not come true, though this paper is indeed a success.

This wallpaper was printed by Jeffrey & Company who was the premier British producer of Arts and Crafts and Aesthetic Movement papers. Besides being the exclusive printer of the designs of Morris & Co and Walter Crane, the list of designers and architects from whom the firm commissioned designs reads like a list of all the greatest figures in the British design reform movement: Owen Jones, Charles Eastlake, Christopher Dresser, B.J. Talbert, E.W. Godwin, CFA Voysey, and Lewis F. Day. Hilton, then, was in extremely good company, and her paper stands beside the best. By using a nursery rhyme for a theme, Hilton follows most closely the example of Crane, the pioneer of the nursery wallpaper. As befits someone who exhibited with acclaim at one of the Arts & Crafts Exhibitions, Hilton’s design, besides being delightful, reflects perfectly the ideals of the Arts & Crafts movement. The colors are soft and light, and the imagery reflects an idyllic pre-industrial past. The paper also has a strong sense of flatness, emphasized through the lack of perspective, the extremely minimal use of shading, and the highly-patterned clothing of the children. The effect overall is charming, cheerful, and no doubt would have pleased any child who had this paper decorating their room.

One thought on “Oranges and Lemons”

Just found this on a wall behind newer wallpaper in my house!