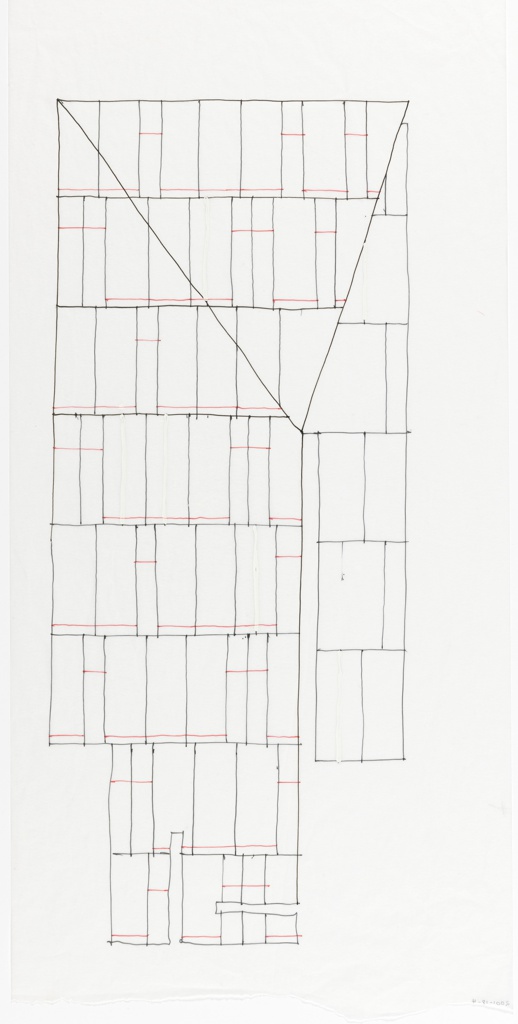 The ephemeral Midtown Manhattan edifice of the American Folk Art Museum, once described as a “handsome flake of metallic crystal glinting on West 53rd Street,” lives on thanks to sketches like this one, donated by Tod Williams Billie Tsien Architects (TWBTA) to Cooper Hewitt shortly after the building was completed in late 2001. Unveiled “at the right time as well as the right place,” when New Yorkers were struggling to reconcile with the destruction wrought by the terror attacks of September 11th,[1] the 40-foot wide museum was infamously razed just thirteen years later by next-door neighbor MoMA in the name of expansion.

The museum’s unusual 82-foot high facade, depicted in this frontal elevation, had been a particular point of pride. Seeking to connect the fabrication of the structure to the craft tradition of the collection, Williams and Tsien, known for their tactile architecture, experimented with hand-casting traditional materials like concrete and aluminum before turning to tombasil, an unorthodox copper-bronze alloy. When liquid tombasil is poured onto a mold of either concrete or stainless steel, chemical reactions between the two different surfaces and the molten metal lead to irregularities in color and texture.[2] Each of the 63 panels comprising the facade was therefore unique; these swirling and pitted surfaces, arranged in three faceted planes, distinguished the narrow Folk Art Museum from its sleek, modernist neighbors.

To finance the construction, the museum borrowed millions by issuing bonds through the Trust for Cultural Resources, a public benefit corporation that helps institutions finance capital projects. The debt payments on the bonds were significant, and in 2009, in a financial struggle made worse by the recession, the museum defaulted on the debt.[3] [4] The building was sold off to MoMA, who hired architectural firm Diller Scofidio & Renfro to reconcile the intimate gallery spaces with their large-scale exhibition needs. The controversial decision was ultimately made to start from scratch; Williams and Tsien’s building was demolished in 2014.

The much-beloved textured exterior was one of many factors that led to the downfall of the museum: MoMA officials reiterated that the opaque façade was not in keeping with the glass aesthetic of the rest of their complex.[5]  While the 63 panels were carefully removed from the site and MoMA announced plans for storage, the façade’s fate remains unclear.  Fortunately, the building and its beloved façade are perhaps best preserved and most accessible through concept drawings like this one, from Cooper Hewitt’s Drawings, Prints & Graphic Design Collection.