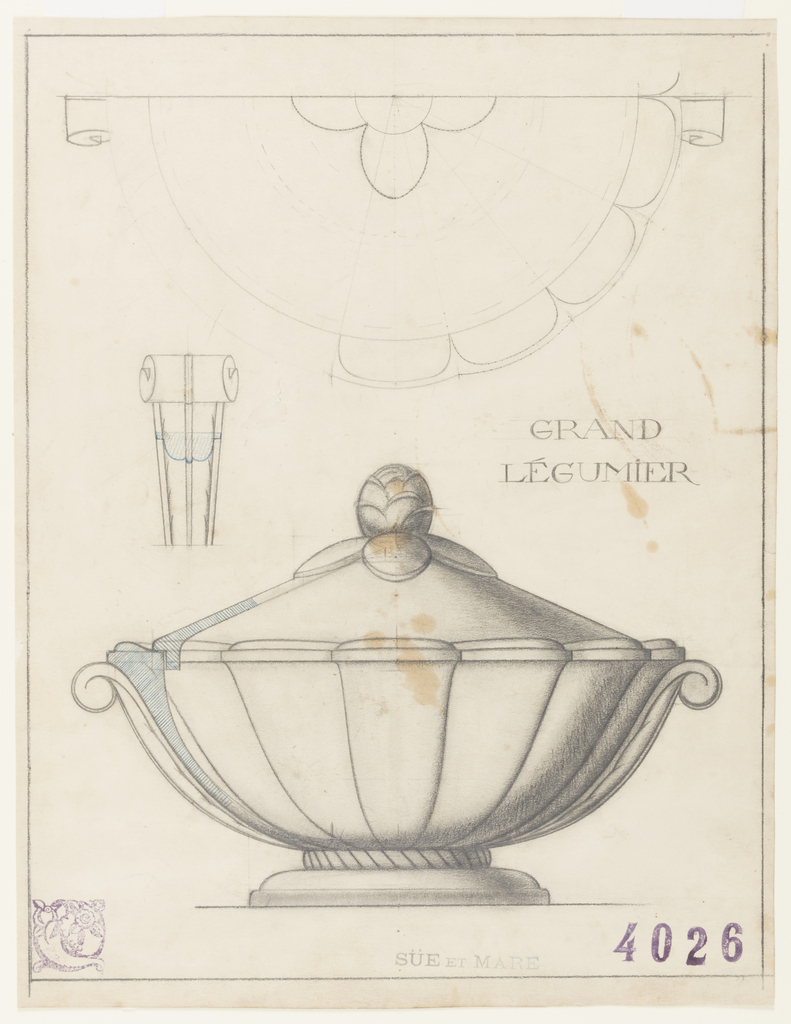 As France sought to regain its economic standing and reassert its cultural dominance following the First World War, designers Louis Süe (1875–1968) and André Mare (1887–1932) formed a partnership, La Compagnie des Arts Français, in 1919. The firm was well-known for updating the historical forms of the Louis-Philippe era, considered by Süe and Mare to be “the last truly French style,”[1] with simplified forms, stylized geometric decorative elements and a modern color palette. Known colloquially as “Süe et Mare,” the business was a classic ensemblier establishment, providing designs for all aspects of the domestic environment from architecture to furniture, textiles, wallpapers, lighting, and decorative accessories, all in luxurious materials that typified the burgeoning Moderne movement in France.[2]

The numerous views of the légumier (vegetable dish) in this drawing, dating from 1921, were likely intended to aid in the fabrication of the piece. On the lower half of the sheet, a detailed rendering of the dish, possibly done to scale, is presented from side-profile, with the addition of blue color pencil indicating the interior walls of the vessel and the lip upon which the lid would rest. The lid itself features a stylized pine cone finial atop four raised geometrically-rendered leaves. On either side of the bowl, two curving handles are reminiscent of the scrolled supports of a mid-19th-century console; a frontal view of the handle is shown at the center-left edge of the drawing. The upper half of the sheet presents a view of the dish from above, drawn with the aid of a compass, which clarifies the scalloped edge and reinforces the simplified forms utilized by the pair of designers.

A vegetable dish in white faience, manufactured after the specifications in this drawing, was exhibited in the pavilion of Fontaine & Cie at the 1925 Exposition des Arts Décoratifs et Industriels in Paris. Designed by Süe et Mare, the pavilion, which blended their favored classical forms with modern decorative details, also included work by fellow traditionalists Maurice Dufrêne, André Groult, and Le Bourgeois.[3] The work of these designers exemplified the hesitation in postwar France to fully accept the Modernism espoused by other architects and designers working at the fair, namely Le Corbusier at his Pavilion de l’Esprit Nouveau, and would have appealed to a less avant-garde clientele.

← Vinyl for a Runner
A New Look for Leathered Walls →