Secret of the Garden 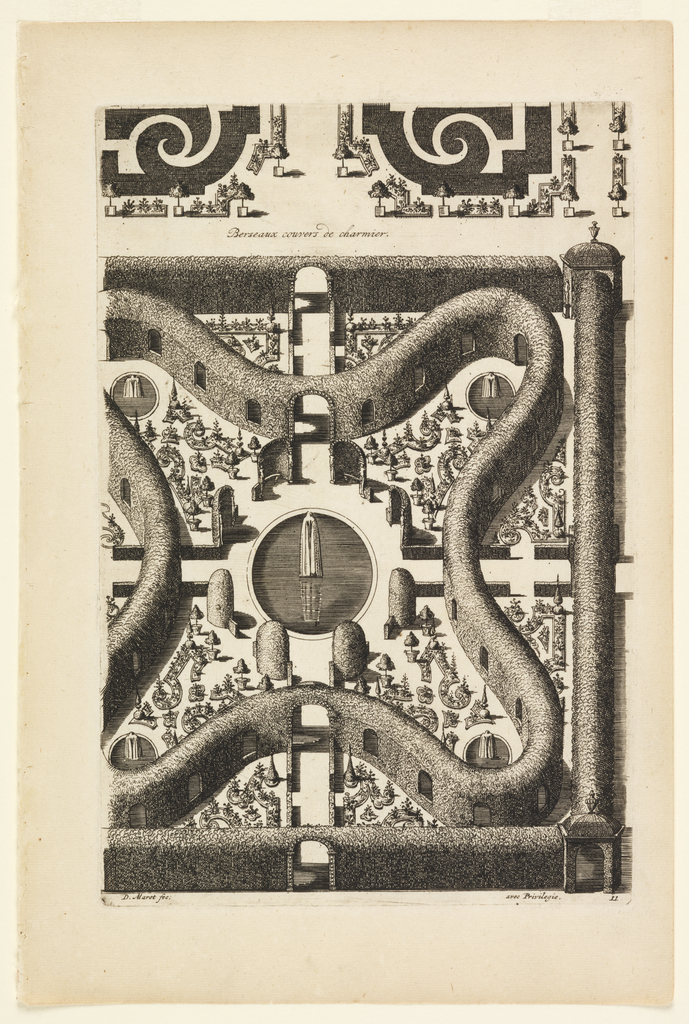 Daniel Marot, architect, decorative designer and engraver fled, like many other Huguenot workers, from France to Holland due to the revocation of the Edict of the Nantes in 1685.  The Edict had offered measures to ensure religious liberty and its revocation sent shock waves through Protestant communities who were no longer protected.  Bringing his talent from France to Holland, Marot became a designer of interiors and gardens for the royal family.

At William III’s castle, Het Loo Palace, in Gelderland, Marot is connected with the building and its decoration but was also involved with the design of the gardens. Inspired by Jean Bérain and Charles le Brun, both of whom worked for Louis XIV at Versailles and whose work migrated from interior decoration to landscape architecture, Marot’s work is characterized by arabesques and a dynamic articulation of curvilinear and rectilinear band-work, c-scrolls, and volutes.[1]  This print was a part of Marot’s Nouveaux Livre de Parterres (The New Book of Landscapes/Grounds), a series of elaborate and imaginative designs for gardens, was published while he working in Holland in 1700.

While we can’t be certain that any of these designs were realized, a bird’s eye view engraving of Het Loo made by Pieter Schneck in 1698 suggests a potential connection to Marot’s design.[2]  Marot had been working at Het Loo from 1686-1695 and this print was published sometime shortly thereafter.  Could the print have been a design for a garden at the Palace that Marot chose to include in his Nouveaux Livre de Parterres series?  Or is this print another instance of Marot’s creativity that was never translated into the earth? Either way, the design is an excellent example of Marot’s exquisite craftsmanship and indeed of the types of designers that France lost to rival countries after the passage of the Edict of Nantes.

This post was written by Kayla Seifert, candidate in the MA History of Design and Curatorial Studies program offered at Parsons The New School of Design jointly with Cooper Hewitt, Smithsonian Design Museum.