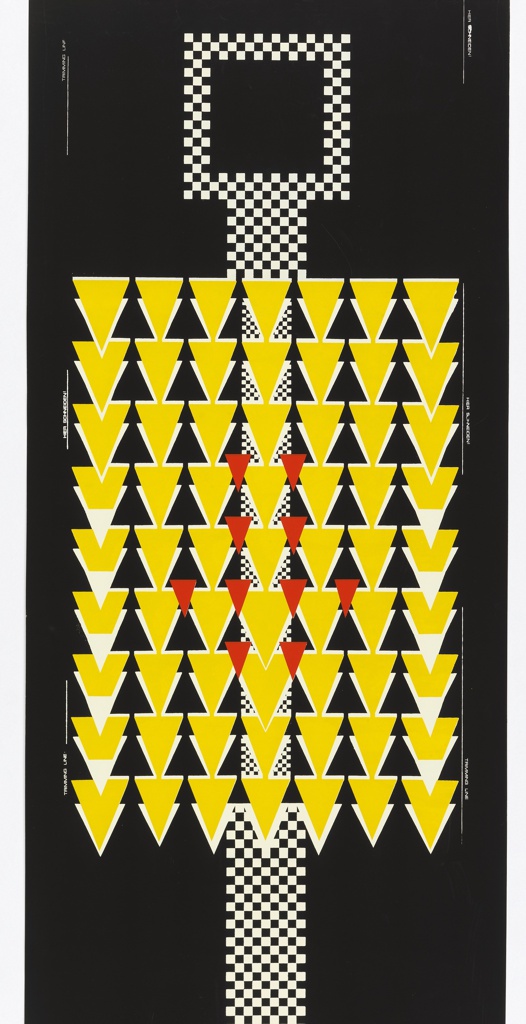 Though this paper dates from the 1960s, it is a reprint of an original design by Charles Rennie Mackintosh created in 1916. It was made for W.J. Bassett-Lowke, founder of a manufacture of model trains and construction sets, for the lounge hall of his house Derngate in Northampton. Mackintosh was an architect and designer known for his interiors, which he often designed with his wife to be a complete work of art, and at Derngate, his last major domestic commission, he created the stenciled wallpaper and murals for every room. This particular wallpaper was considered too stark and was taken down in 1920 at the request of the owner and replaced with a wallpaper deemed more pleasant on the eye. The owner’s reaction is in many ways completely understandable. This particular section of the sidewall is the upper section, the frieze. The checkerboard stripe, continuing vertically the entire height of the wall, would be the only other decoration on the otherwise completely black wall space. The stark effect of the paper can be seen in contemporary photographs and even more in the modern-day restored interior and demonstrates why Mackintosh’s particular version of Art Nouveau was often seen in his own day as severe and off-putting. The group he formed with his wife Margaret Macdonald, her sister Frances, and his friend Herbert MacNair was even called the “Spook School”, though this was as much for the slender, palid women of the MacDonald sisters’ art as it was for Charles’ restrained, geometric style. The group, also called the Glasgow Four, was much admired in Germany and in Austria by the Vienna Secession, and Charles exhibited at the Secessionists’ exhibitions in 1900. Mackintosh’s geometric style was in many ways similar to that of Josef Hoffmann, Koloman Moser, and other designers in the Secession and the related Wiener Wërkstatte. This wallpaper, developed late in Mackintosh’s career, lies at an extreme in his style and demonstrates the stunning modernity achievable in his brand of Art Nouveau.

One thought on “Glasgow Geometry”

The featured image is not a complete representation of Mackintosh’s 1916 design for the wall stencil. There are several additional colours not shown in the version above. His drawing can be seen here.

As can be seen in this virtual tour. The room has a strong ‘jazz age’ aesthetic more prescient of the later Deco movement than anything else in Britain from the same date. Mackintosh included very few aspects of his earlier Art Nouveau ‘Glasgow Style’ work. The work for this design was completed in Chelsea, London where Mackintosh lived until around 1923 after having left Glasgow in 1914.

This design was indeed replaced with a lighter scheme in 1920 based on a background of ‘French Grey’. It might be argued that this second scheme, also designed by Mackintosh was even more avant-garde and ‘proto-deco’. It was reproduced in 2017 at full size for the first time in 90 years and can be seen here

The 1916 design is thought to have been stencilled onto paper-backed canvas which was pasted to the wall surface.

Mackintosh’s render of the second design is reproduced here

Some of the other rooms in the house feature work from Mackintosh but there are not ‘murals for every room’. Rather one room features futuristic built-in furniture by Mackintosh and another an astonishing ‘Gesamtkunstwerk’ bedroom. Clever spatial remodelling and a front door reprising earlier work from The Glasgow School of Art west wing of 1909 are also notable features.

The house, 78 Derngate, is in Northampton England and can be visited.
See 78derngate.org.uk for details. This site also contains very detailed information about the whole project and Mackintosh’s other work from this period.