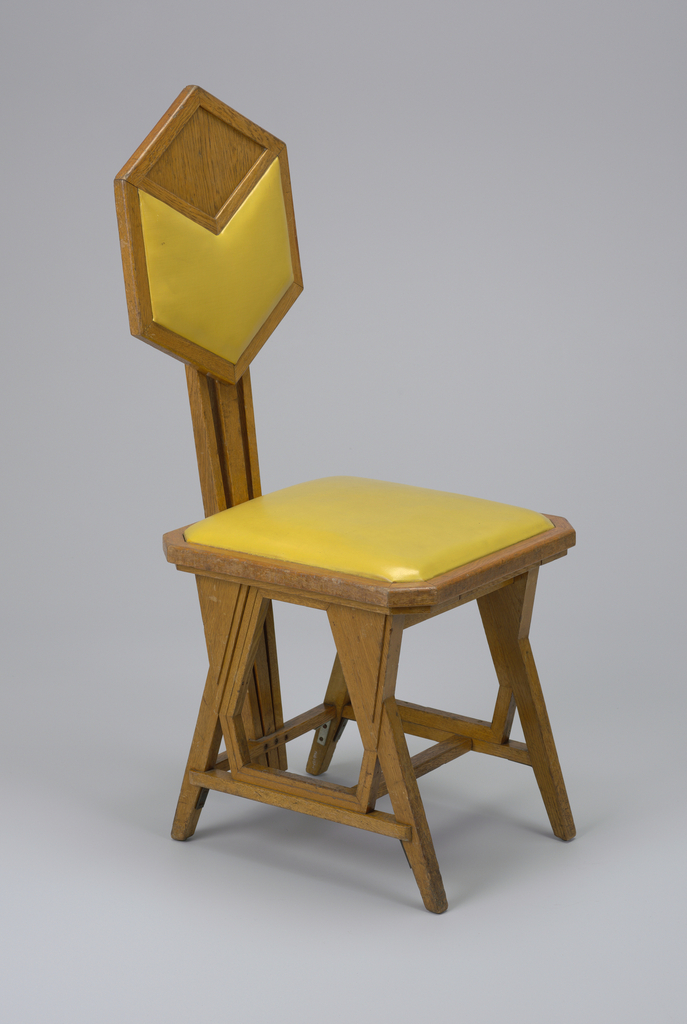 Posted by Catherine Acosta on December 19, 2016

Echoing the larger artistic vision of Frank Lloyd Wright’s Imperial Hotel in Tokyo, this chair was designed for the hotel’s Peacock banquet room in the early 1920s. Amongst the 700 drawings that exist for the hotel, most are for its interior, showing how significant its design was.[1] The chair’s hexagonal back and square seat reflect the geometrical motifs used throughout the hotel’s interior and exterior. Demolished in 1968 after falling into disrepair, the hotel combined the stark angularity of Wright’s previous designs with traditional Japanese architecture. Similar in style to Wright’s Midway Gardens in Chicago built in 1914­—the same year he began designing the Imperial Hotel—the hotel’s exterior innovatively combined poured concrete, concrete blocks, and local Oya stone.

Construction of the Imperial Hotel began in 1917 and it opened in 1922. The following year it survived the Great Kanto Earthquake of 1923, one of the worst earthquakes to hit Japan in the twentieth century. With a death toll around 140,000, the Imperial Hotel withstood the earthquake’s destruction. Having heard the horrendous news, Wright waited ten days before receiving a telegram announcing the hotel’s miraculous survival.[2] In light of this, the hotel provided shelter to the homeless and its entrance and garden pools provided water to stop nearby fires following the earthquake’s aftermath.[3] Expectedly, Wright’s architectural ingenuity was praised.

The design of the Imperial Hotel emphasized “organic wholeness”—a critical concept to many of Wright’s commissions. The hotel exemplified this with its exterior and interior brickwork. Relating wholeness to simplicity, Wright said “This is, I believe, the single secret of simplicity: that we may truly regard nothing at all as simple in itself. I believe that no one thing in itself is ever so, but must achieve simplicity—as an artist should use the term—as a perfectly realized part of some organic whole. Only as a feature or any part becomes harmonious element in the harmonious whole does it arrive at the state of simplicity.”[4] Today, this chair reminds us of what once was the conceptual simplicity and wholeness of his Imperial Hotel.

← Designing with Empathy: By the People and Pratt
Infographic: Where Do Our Unwanted Clothes Go? →