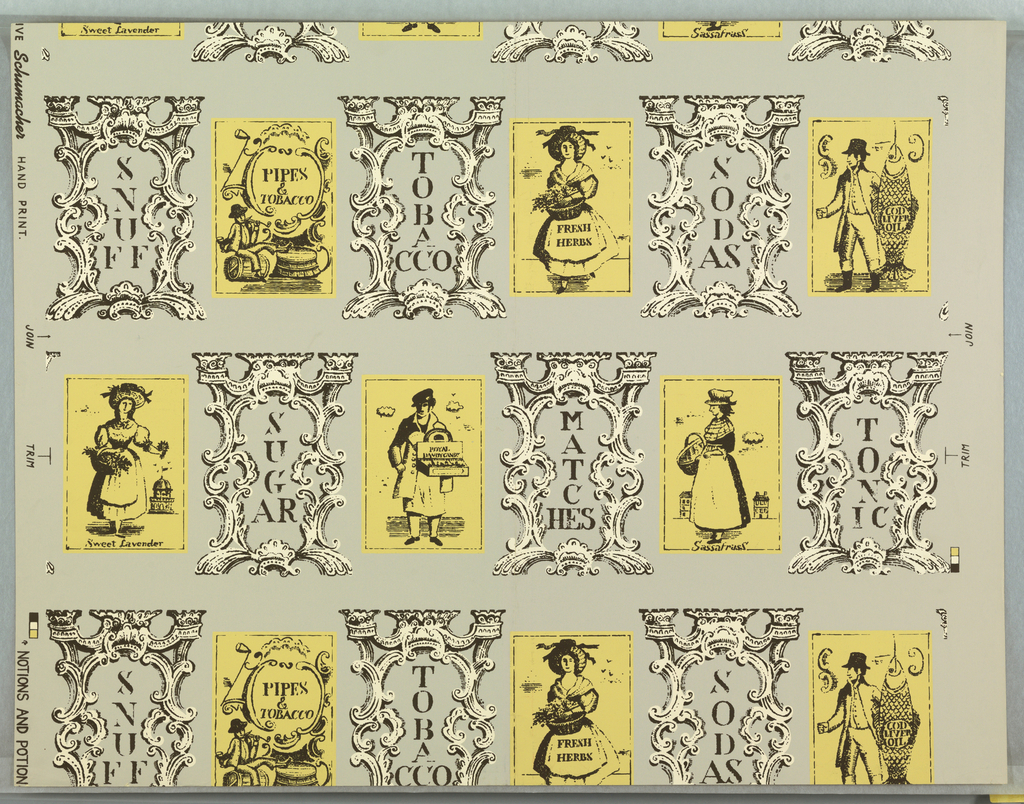 Posted by Nicholas Lopes on November 6, 2016

This paper features a delightful cast of characters. Various street salesmen, framed as if on postcards or playing cards, sell goods as varied as lavender, sassafras, and cod liver oil. In between them Neo-Rococo frames surround names of further goods such as “Tobacco”, “Sugar”, and “Tonic.” Though this paper is from the 1950s, one could be excused if they thought it was older. Everything about this paper, from the fonts on the signs to the figures seemingly ripped out of an old Dickens illustration, seems calculated to evoke the Victorian age. Even the title, “Notions and Potions” reminds one of old-fashioned advertisements, and the color scheme brings to mind yellowed newsprint.

Historically-inspired wallpapers like this one were called “documentary” papers. They first became mass-produced in the US for the postwar consumer market, basing their appeal on the common perception that wallpapers in general were an old-fashioned form of decoration. Several companies devoted themselves to producing these papers, advertising them as just the familiar and homely touch needed to counteract the stark, off-putting modernity of mid-century houses and furnishings. As the term for these papers suggests, their imagery was often drawn directly from old documents such as newspapers, period wallpapers, and ephemera. However, they were almost universally produced using the very modern method of screen-printing which increased their affordability. These papers were just one attempt by the industry to capitalize on the postwar housing boom by reminding consumers of the age when wallpaper could be found in every home.

The company that produced this design, F. Schumacher & Co., balanced its output between documentary papers and more modernist examples. Far from just focusing on one medium, the company also made fabrics and carpeting. They often collaborated with designers such as Frank Lloyd Wright, Vera Neumann, and Cecil Beaton to produce lines of wallpapers or matching sets of wallpapers and textiles. They were incredibly successful, producing numerous extremely popular collections throughout the 50s, 60s, and 70s, and they are still in business today selling luxury fabrics and trims, floor and wall coverings.

← Picasso’s Fish
The Category is Food and Drink →