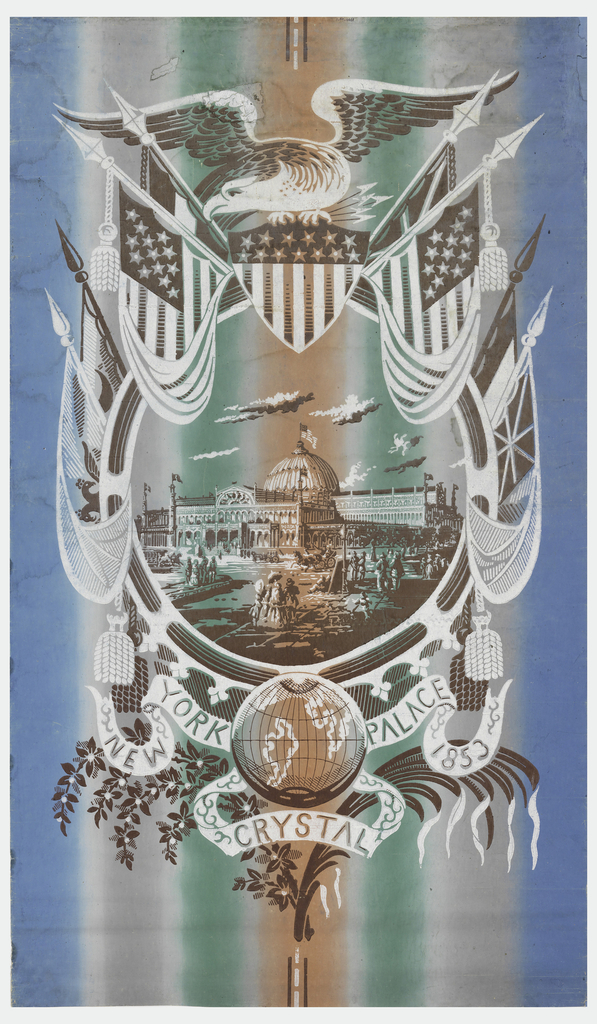 The 1853 Exhibition of the Industry of All Nations was New York’s answer to the groundbreaking, wildly successful 1851 Great Exhibition in London. It originally took place in what is now Bryant Park, in an enormous Crystal Palace built to rival the iconic Crystal Palace of the previous exhibition. The fair was the brainchild of several New York industrialists and businessmen, who sought to use it to promote American industry and culture and assert the status of the city as an international hub. However, unlike the glittering London exhibition, the New York exhibition struggled with monetary troubles, minimal government support, empty exhibition halls, lack of preparation, and doubts about the commercial intentions of its private managers. Ultimately, the exhibition only saw a million visitors in the sixteen months it was open, a sixth of the number that attended the Great Exhibition, despite being opened almost three times longer than the earlier fair, had only a third of the number of exhibits, and was a financial disaster. The building itself was sold soon after closing and then burned down five years later.

This window shade hints at little of the struggles behind the scenes. Pure advertisement, the shade takes as its central subject the marvelous New York Crystal Palace. The sketchy quality of the design, with people and clouds built up out of patches of ink, suggest that it was based on a lithograph or photograph. Fair promoters eagerly used the new medium of photography to document the first American world’s fair, and over a hundred photographs were taken of the building and its exhibits, most of them now lost. Typical national emblems such as the eagle, the shield, and the flags glorify the building as a paean to American technological might, framing it as if it were in an enormous seal. The globe and other flags point to the international nature of the fair. The shade, mechanically-printed, is itself technically impressive, and is a wonderfully eye-catching and an exuberantly patriotic tribute to this great American landmark.

← Psychedelic Seats
A Serving of Dish →