A Gift for Marie Antoinette 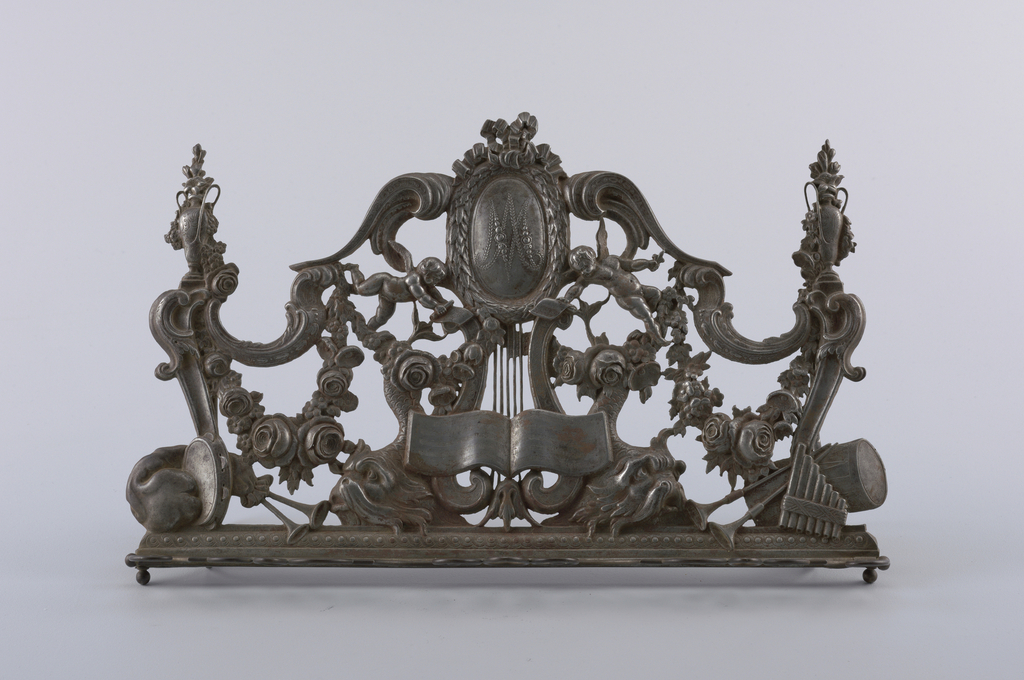 The initials “MA” in the central cartouche of this iron music stand belong to Marie Antoinette, who married the future Louis XVI of France in May of 1770. Winged putti fly over a musical score carrying banderoles inscribed with the surnames of Baroque French composers, including that of Jean-Baptiste Lully (1632–1687), whose opera Persée was performed during the wedding celebrations of the dauphin and his Austrian bride.

In 1880, the American art collector James Jackson Jarves (1818 –1888) described the music stand as having been designed by the prince himself, as a betrothal gift to Marie Antoinette. It is plausible that Louis was directly involved in the stand’s production, for he had a great interest in metalworking and set up a forge at Versailles — much to his wife’s annoyance. The locksmith François Gamain (1751–1795) later described how Louis had “passionately loved working as a smith, and hid himself from the queen and the court to file and forge with me. To set up his anvil and mine, unknown to all the world…” [1]

The king’s metalsmithing hobby is ridiculed in a satirical print produced two years before his execution. Louis XVI is shown dressed as a locksmith and valet. The latter is a reference to his disguise during the royal family’s attempted flight from Paris, or “tour de France”, during the tumultuous summer of 1791. It also references the Compagnons du Tour de France, a fraternity of craftsman whose apprentices learned their trade by traveling throughout the country. The king, armed with a mallet and razor, approaches a mannequin head, evoking the decapitated heads being paraded through the streets of Paris, and foreshadowing his own gruesome end.

[1] Soulavie, Jean-Louis. Historical and Political Memoirs of the Reign of Lewis Xvi: From His Marriage to His Death, Founded on a Variety of Authentic Documents … and on the Secret Papers Discovered, After the 10th of August, 1792, in the Closets of the King at Versailles and the Tuileries. London: Printed for G. & J. Robinson, 1802.

← Sound Off!
The Writing is on the Wall →