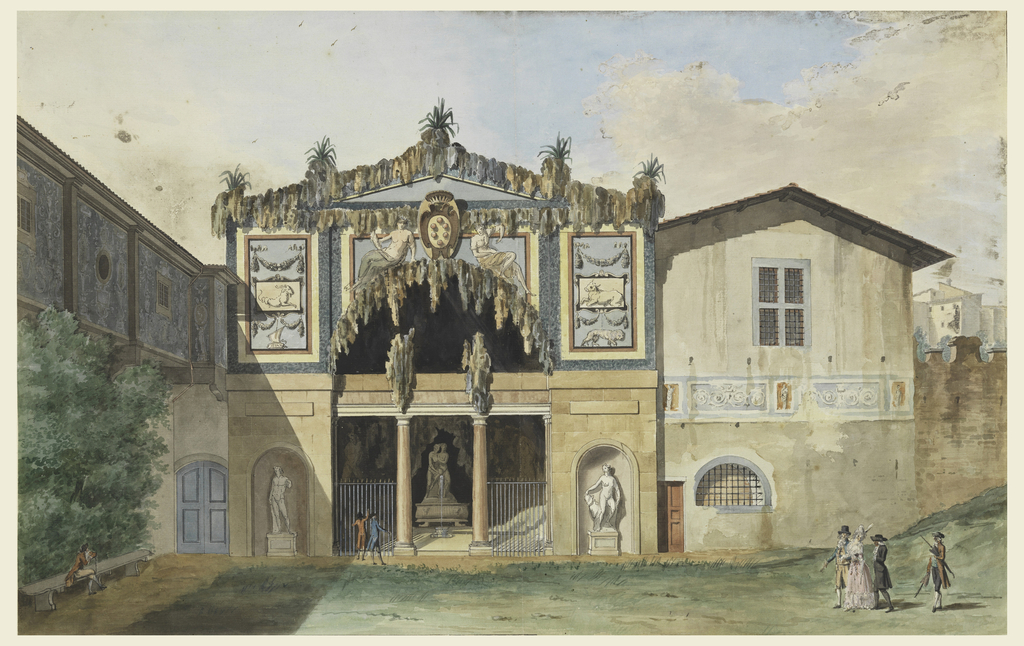 In the eighteenth century, many Italian artists produced views of popular tourist destinations to sell as souvenirs to travelers on the Grand Tour. This drawing by an unknown artist shows the Grotta Grande in the Boboli Gardens of Florence. Visible within the grotto’s chambers are Paris and Helena, sculpted in 1560 by Vincenzo di Rafaello de’ Rossi, and Michelangelo’s ‘slaves’, initially created for the tomb of Pope Julius II and installed at the grotto in 1585.

The Boboli gardens were designed by Bernardo Buontalenti and built between 1583 and 1588. The Medici Duke Cosimo I commissioned the expansive garden to be planted on the sloping landscape behind his Pitti Palace. Buontalenti’s grotto may narrate a scene from Ovid’s metamorphosis; its anthropomorphic figures seem to be in a state of transition between human and stone.

Grottoes became a popular element of Italian landscape architecture during the sixteenth century. In this period, collections of exotic or irregularly formed natural materials, such as stalagmites and foreign shells, were arranged in gardens, often embellishing fountains or rocky outcrops. These were fictive environments that blurred the delineation between art and nature. This practice coincided with the production of scientific literature dedicated to stones, botany and the natural world.

“No more a boy ! A bold, heroic form,
He clasps her, who can scarce resist the storm.
With arm grown strong he lifts her high and free…
A word more ! After all we’ve seen today,
I call the piece: The Rape of Helena…”