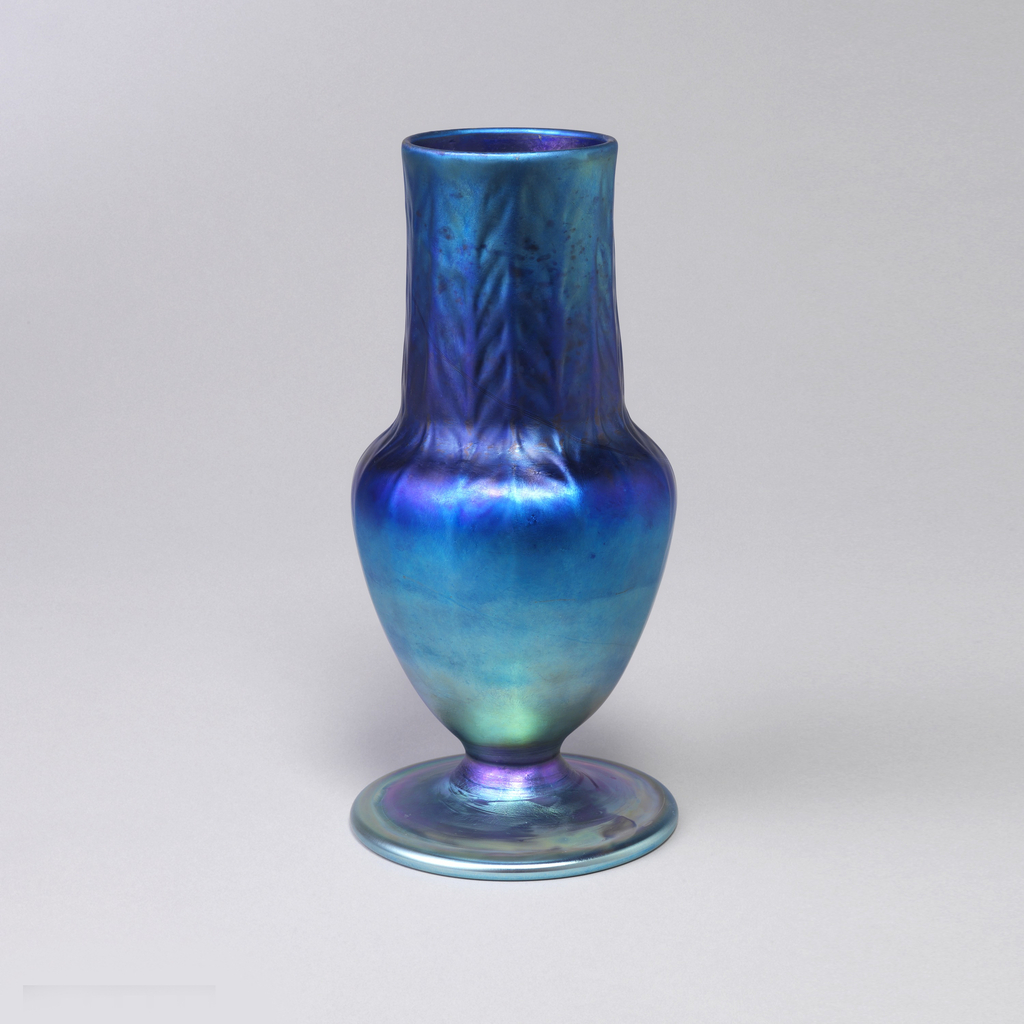 The luminous iridescent shades of blue in this 8 ¼ inch tall vase are breathtaking. The neck’s chevron pattern resembles the “rippled” and “feathered” glass in Tiffany’s stained glass windows and famed lamps. This shade of blue is similar to the “aurene blue” created by Steuben Glass Works by 1904 and can be seen in a vase , also in the museum’s collection, designed by Frederick Carder for Steuben years later in the 1920s.

Tiffany and his craftspeople manipulated and experimented with the age-old medium of glass at the Tiffany Glass and Decorating Company, founded in 1892 in Corona, New York. Tiffany patented the formula for his favrile glass in 1894, having developed it in 1893 with assistance from Arthur J. Nash who managed Tiffany Furnaces beginning in 1892. Originally developed for Tiffany’s ecclesiastical stained glass windows, favrile glass was first made in sheets before being used for blown glass.

The Victorian era provided a ripe environment for the appreciation of art glass.  During the last quarter of the nineteenth century the philosophies of artistic movements, such as the Arts and Crafts Movement, Aesthetic Movement, and Art Noveau, created a desire for beautiful everyday objects. Central to this era—and particularly to Tiffany’s designs—are the pure qualities of nature. The influence of nature is expressed in the chevron pattern found on this vase’s neck and suggests rippled water or the veins of a leaf.

Tiffany was first and foremost an artist. He began his career as a painter and continued painting up until his death in 1933. His coloristic sensibility in glass shows his profound and painterly knowledge of light. This vase demonstrates Tiffany’s ability to interpret both nature and beauty through glass. Although he never made any glass pieces himself, Tiffany’s supervision of the glass-making process at his factory shows his innovative vision for both color and form.

This blue vase is currently on view in  Passion for the Exotic: Louis Comfort Tiffany and Lockwood de Forest.