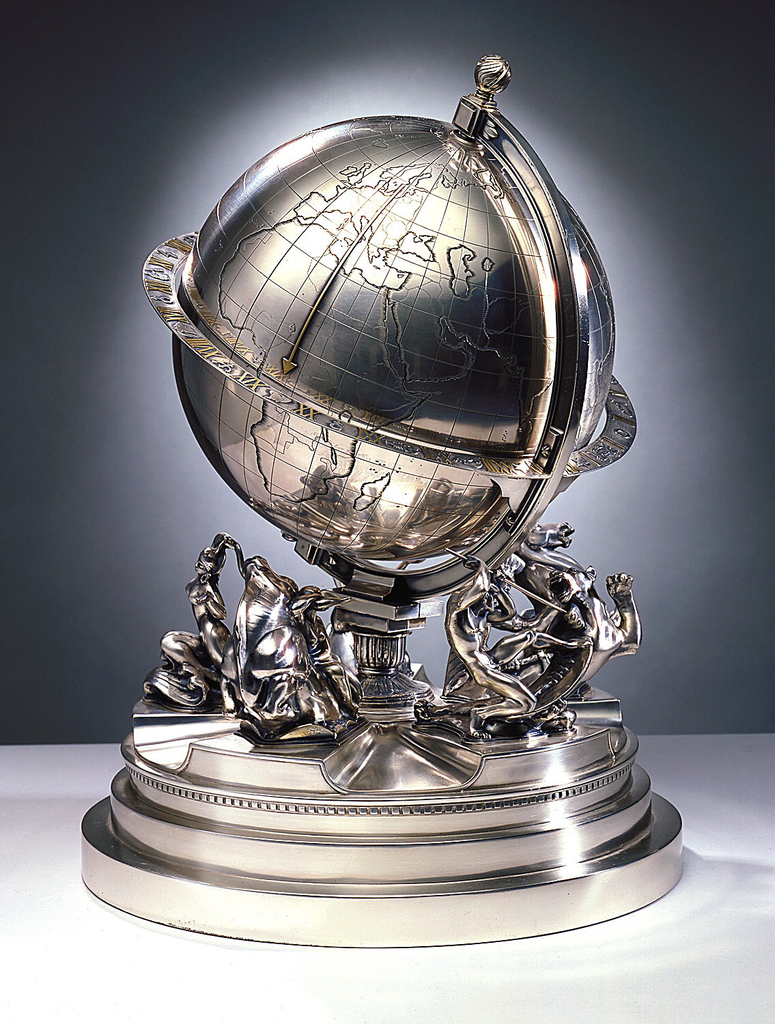 This table clock, designed by Swedish goldsmith, Baron Erik Fleming, truly captures the spirit and wonder of travel in its depiction of a globe. Spinning on its axis hour by hour, this clock lets the viewer explore the many vast places in the world, from the massive continents of the Americas, to the tiny islands of Oceania, all lightly etched into the smooth silver surface.

The silver material evokes Fleming’s ties to traditional silvermaking techniques, as he uses precious metals and craftwork to show his reflection on the past, contrary to the visionaries of the Modern Age at the time. As a designer who was known for reinterpreting the Queen Anne style in Scandinavian craft, he incorporates these qualities of tradition from his attention to decoration and detail on the globe itself, to his dramatically posed statues surrounding the globe, which represent personifications of the continents. The decision to include these details shows the designer’s statement in reaction to the simple geometric characteristics of Modern styles, such as the New World Radio clock by Raymond Loewy, also included in Cooper Hewitt’s collection. The sheen of the silver completes Fleming’s adoration for older styles, as he uses a more traditional material instead of the brand new inventions of Modernism, such as Loewy’s use of Bakelite for his radio.

Yet the table clock was not merely an object for curious eyes to wander, nor a piece of nostalgic tradition, but the clock also had the life of a traveller itself due to its famous owners. The piece was originally designed and made by Baron Fleming in 1930 in Stockholm as a gift to the Swedish businessman, Ivar Kruger, also known as “The Match King,” as a present for his 50th birthday. [1] Unfortunately, the table clock did not last for very long in the hands of Mr. Kruger, whose Ponzi scheme of a company collapsed with the beginning of the Great Depression. In 1932, he was found dead in his New York hotel room, with a gun beside the body, and a clock without an owner. [2,3]

After his death, all his items were sold at auctions to pay for his debts, including this globe clock. [4] The object then came into the possession of Mr. James Hazen Hyde, a New York Businessman who had escaped to Europe in 1905 after a famous New York scandal. [5] Hyde, who was interested in objects that featured continents, bought the clock and Paris became its second home. [6] Hyde and the clock eventually found themselves in New York City in 1941 after escaping Nazi occupation in France. Finally in its third home, the clock stayed with the Hyde family until it was gifted-as part of a large group of objects that had representations of continents-to Cooper Hewitt’s collection. [7]

Sebastian Grant is a Masters student in the History of Design and Curatorial Studies at Parsons: School of Design, and a Cooper Hewitt Fellow in the Publications Department.

← The World of Yesteryear
Freedom of the Seas →