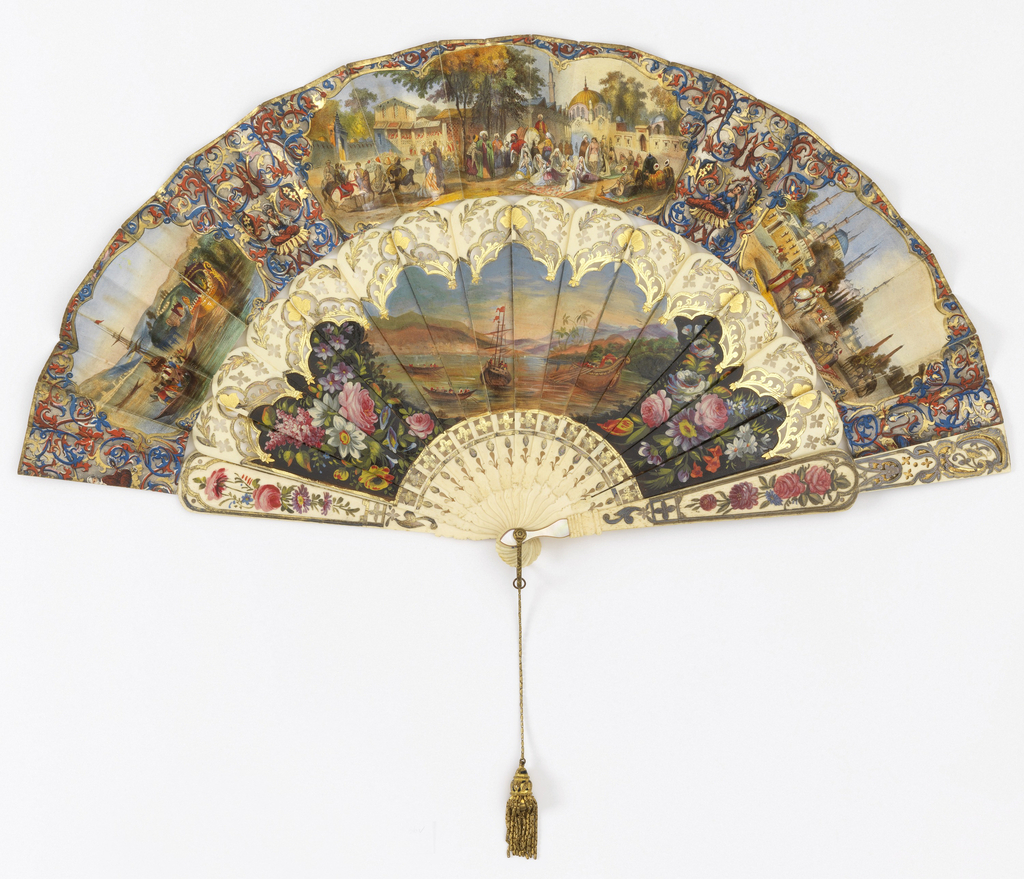 This fan’s printed scenes of the Ottoman Empire are after the English architect and landscape painter Thomas Allom (1804-1872), whose drawings were engraved and published in the 1840 book, Constantinople and the Scenery of the Seven Churches of Asia Minor. [1]

The center image is of the Arut Bazaar, a female slave market in Constantinople. The scene shows women of various nationalities on display as the chief eunuch makes his selection for the imperial harem. Immensely popular, Orientalist slave paintings provided Western European artists with a convenient and legitimized opportunity to depict titillating female nudes. Such scenes eroticised female slavery for the voyeur’s pleasure and rarely presented the abject and humiliating reality of slavery. Orientalism was a nineteenth-century phenomenon describing the West’s inaccurate and often patronizing cultural representations of “The East”. Such images profoundly affected European perception, fostering racism and validating colonial ambitions.

At left is the Bosphorus Strait near present-day Istanbul where, in 1833, a famous treaty was signed between Sultan Mahmud II, of the Ottoman Empire, and Tsar Nicholas I, of Russia. Here, the white tents of the Russians can be seen upon the cliffs above the valley where the Treaty of Hünkâr İskelesi (the Manslayer’s Pier) was signed, establishing a defensive alliance between the nations. The sultan’s splendid gilded boat with a canopy of honor is shown returning from a meeting with the new allies. Nearby Turkish vessels still their oars and pay homage as he passes. At the left can be seen the great 1732 aqueduct leading water from the Black Sea to Beyoğlu (Pera). While the treaty was perceived as a considerable threat to Western Europe, here the scene is being employed as an innocuous exotic landscape.

The scene at right depicts the Hippodrome of Constantinople, an ancient sporting and monument complex encircled by a racetrack. Dominating the scene are the six minarets and blue roof of the Sultan Ahmed Mosque, illustrating foreign architecture’s perpetual appeal.

2 thoughts on “The Orientalist Gaze”

Is there any way that I can suggest an image from the Cooper Hewitt Collection for you to consider using for the “Object for the Day” communication? Many thanks, Jeff Rosen

Absolutely! What object did you have in mind? ~Rebekah Pollock