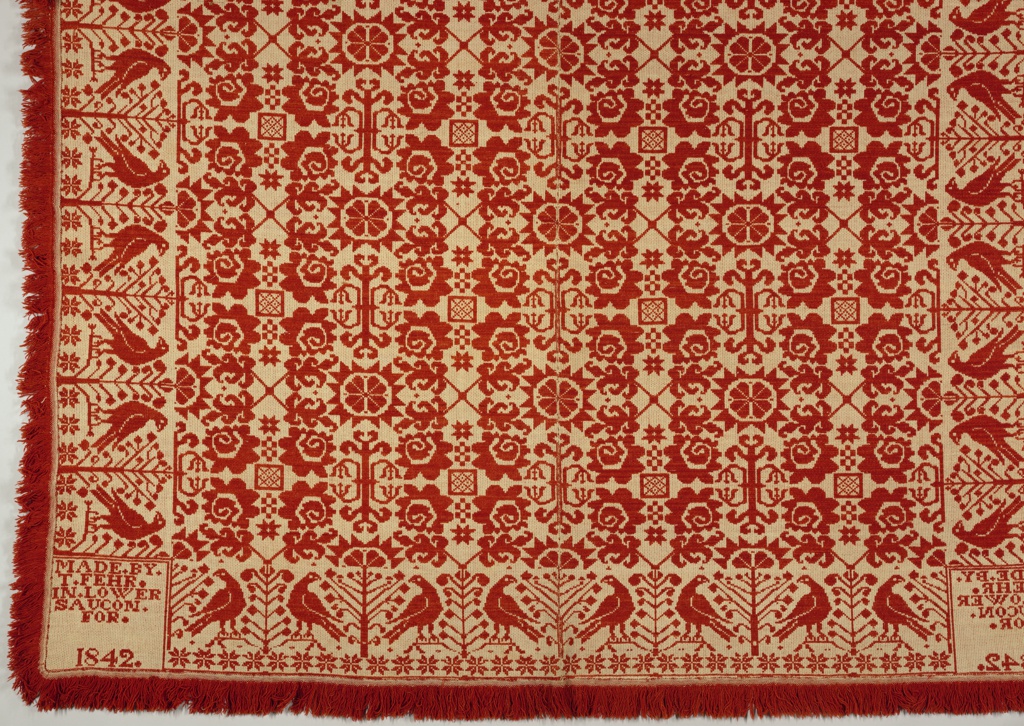 Woven coverlets in the United States are typically categorized as either Geometric or Figured and Fancy; the latter describes this red-and-cream wool and cotton example with its floral and animal motifs. Though Figured and Fancy varieties do maintain regularity and often a linear quality, the inclusion of curvilinear lines, natural or architectural elements, etc. distinguishes them from Geometric coverlets which would feature only motifs based on circles and squares. Here, blocks of stylized flowers and stars fill the central area, while the border is comprised of trees flanked by birds.

While Geometric coverlets could be woven by both men and women, Figured and Fancy coverlets were almost exclusively woven by professional weavers, a role usually filled by men in nineteenth-century America. Professionally made coverlets often included an inscription with the weaver’s name as well as the location and year of its make. The corner block of this 1842 coverlet allows us to not only accurately date the piece, but also provides enough information to help identify a specific maker. Using the first initial and last name woven into the coverlet, “T. Fehr”, we can safely attribute this coverlet to a Thomas Fehr working in the Lower Saucon region of Northampton County, Pennsylvania.

Fehr was born around 1815 and was known to weave alongside a relative named Abraham Fehr; corner blocks of other extant coverlets are inscribed “A. & T. Fehr.” Though it is not clear what the exact nature of their relationship was, Thomas was only about seven years Abraham’s senior, thus it is possible they may have been brothers or cousins. Nonetheless there are a number of coverlets woven by Thomas, Abraham, and a Charles Fehr in that region and period, making it likely that weaving was the Fehr family trade. At some point, a Fehr weaver—it is not known which—also wove alongside a man named Keck from at least 1842-1848.

A woven coverlet was a popular item to have in the home in the early to mid nineteenth-century, and as it was the topmost cover of the bed, it would have been a striking addition to a middle-class interior. With the help of Jacquard attachments or patterning devices, the efficiency with which a coverlet could be made rendered them a more accessible alternative to a one-of-a-kind quilt that required significantly more steps to achieve a finished product. Quilts needed to be designed, cut, pieced, filled, stitched and backed, and yet only one side was really functional as the top. Coverlets however were intended to be reversible; generally coverlets were woven as double-cloth meaning that the opposite side was identical in pattern but reversed in color. In addition, coverlets were significantly wider than the looms used in their production, so weavers would produce two or more lengths of the cloth and skillfully seam them down the center. This explains why coverlets may have corner blocks with lettering that appears backwards, allowing both sides to be legible, and therefore, functional.

Erica Travis completed her graduate coursework in Fashion and Textile Studies at the Fashion Institute of Technology. She currently works as a textile handler for the Cooper Hewitt’s mass digitization project.