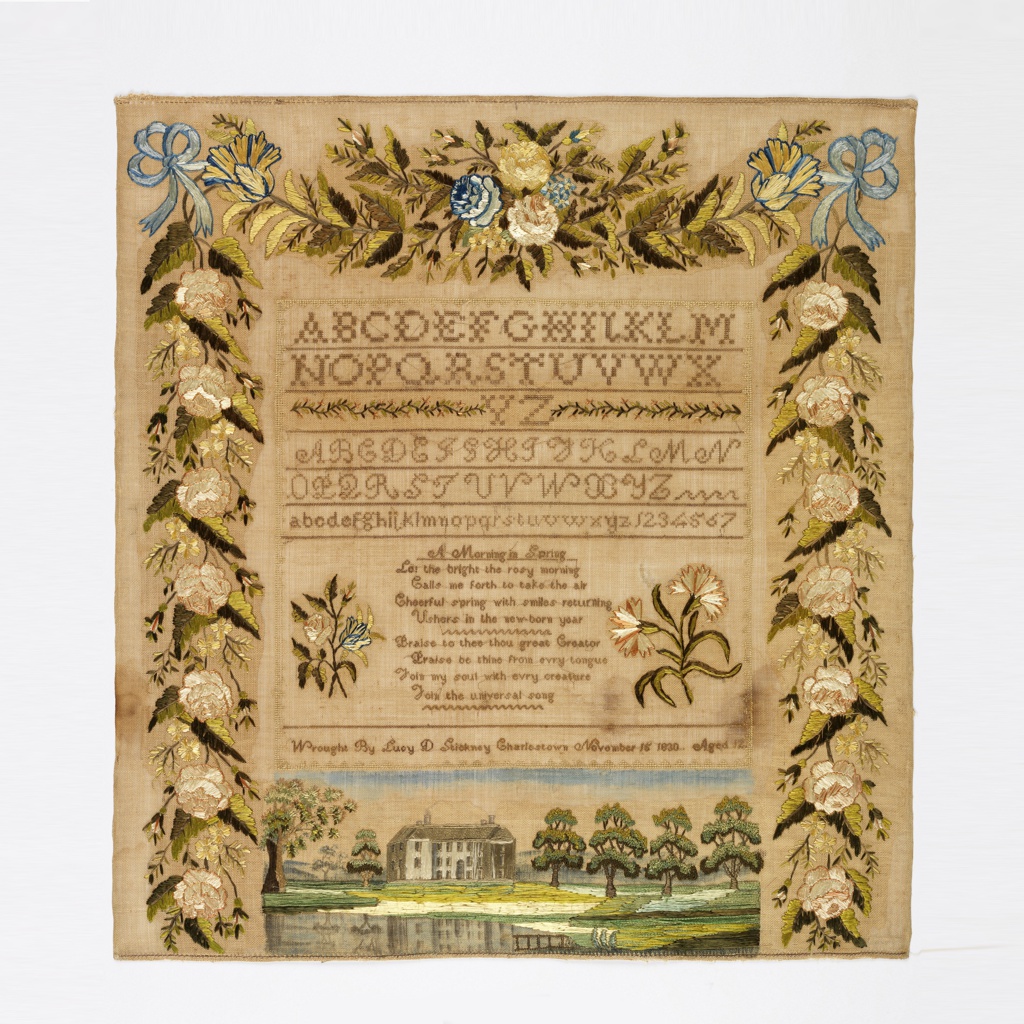 Lucy Drury Stickney was the daughter of William Stickney (1783-1868) and Margaret Nowell (1792-1840). Born in 1818, she was named for her father’s first wife, Lucy Drury (1787-1812), with whom he had had two sons. Margaret bore him six daughters and two sons, one of whom died in infancy. William Stickney began his career as a Boston grocer before founding a successful mustard and spice firm. In 1827, he moved his family and business to Charlestown, where he married a third time after the death of Lucy’s mother. His company, eventually incorporated under the name of Stickney & Poor Spice Co., continued to thrive throughout the nineteenth and twentieth centuries.

In 1833, at the age of fifteen, Lucy married Hervey Zury Kimball (1811-1886), a leather dresser. Of the couple’s fourteen children, only five survived past the age of two: Amanda Melvina (born 1834), William Henry Stickney (born 1840), Lucy Maria (1845-1853), Samuel Howell Kimball (born 1848), and Frederick Stickney (born 1858). Lucy and her husband initially lived in Charlestown, but from at least 1839 to 1840 they were living in New York City, where two of their children were born. The family was back in Charlestown by 1842, and had moved to Malden, Massachusetts, by 1860. Lucy was a member of the Daughters of the American Revolution and was very active in Malden social and charitable organizations. She was one of the original promoters and founders of the city’s Old People’s Home. Lucy died in 1902 at the age of eighty-four.

Lucy’s sampler is bordered by a naturalistic garland of roses secured by bows of blue ribbon at its upper corners. At the bottom of the sampler, below three alphabets, a verse, and an inscription, is a stately house in a park-like setting with trees and a body of water. This idyllic scene is a combination of watercolor and embroidery. The painted areas were most likely the work of a professional artist or a skilled instructress.

Hi, do you by chance know where this sampler is? Is it possible there is more than one?

I found this in BALTIMORE MD

i have her a sampler by lucy d.stickney

I have a original framed sampler by.LUCY .D STICKNEY. DATE 1830.

HELLO, MY NAME IS RAY GIRPOUX, I HAVE THE SAMPLER. MY PHONE NUMBER IS 1-207-797-6184. I DO NOT HAVE AN EMAIL BUT CAN BE REACHED AT THE PHONE NUMBER ABOVE OR USE A FRIENDS EMAIL petried0@gmail.com

I am looking for A PRINT OF THE SAMPLER FOR MY WIFE ON HER 82ND BIRTHDAY. SHE HAS AN OLD PRINT THAT SHE LOVES BUT IT IS FADED AND i WOULD LIKE TO GIVE HER ONE SO SHE CAN ENJOY THE BEAUTIFUL COLORS IN THE SAMPLER

I have a sampler by lucy d.stickney

I have a original framed sampler by.LUCY .D STICKNEY. DATE 1830.

I have this sampler as well and would like to sell it. How do I go about this?

I found one (a beautiful repro, I’m guessing).. in New Hampshire. I will check back and if anyone would like to buy, I’m willing to sell. Thank you.