The Tortoise and the Vase 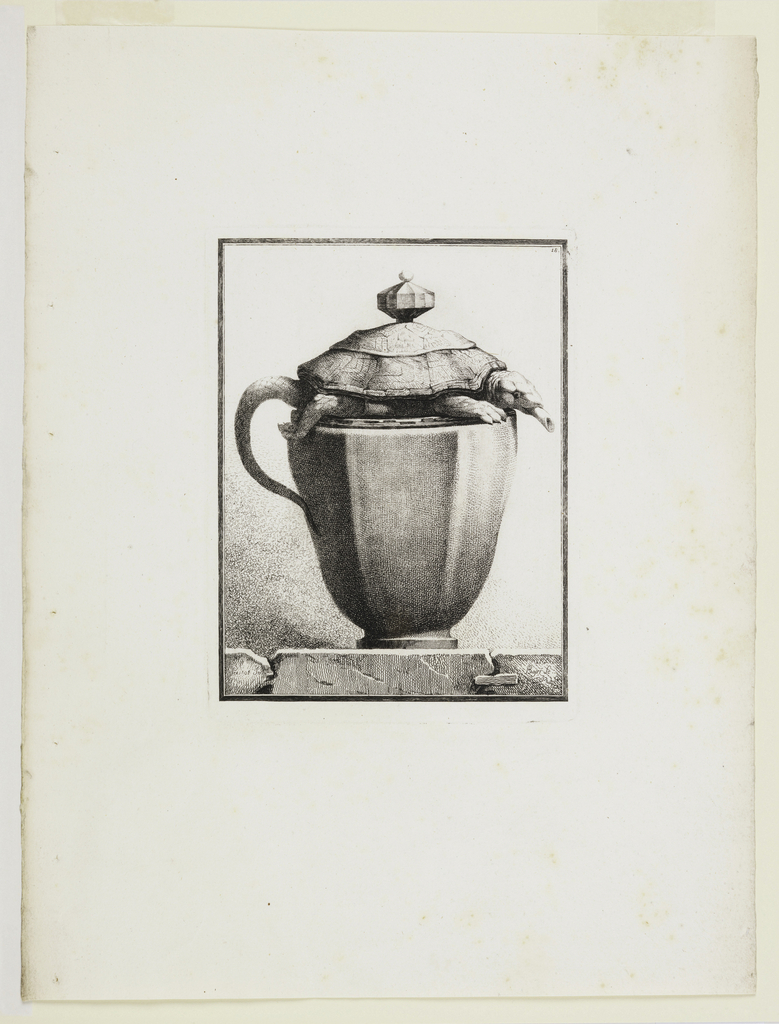 It may take a moment to figure out this eccentric vase design: is a tortoise sitting on a faceted plinth or are the two integrated into a single design? This eccentric print actually shows a vase, or an ewer with a lid shaped like a tortoise. Its mouth serves as the sprout, and its tail as the handle. The ridged face of the vase mimics the shape of the tortoise’s shell. Vase designs were one of the most vibrant templates for ornamental and iconographical invention in eighteenth century France and Italy. This charming vase was designed by the French architect Ennemond-Alexandre Petitot (1727–1801) and was etched by Benigno Bossi (1727-1800), the Italian print maker, stucco maker and Petitot’s frequent collaborator. Petitot was a French architect who was mostly active in Italy. From 1753, he became the royal court architect to Philip, Duke of Parma (reg.  1748–65). This specific design was published as plate 18 in a Suite des Vases Tirée du Cabinet de Monsieur Du Tillot Marquis de Felino (1764) which included 31 new vase designs.

Several eighteenth century artists actively produced vase designs, a long list that includes Jacques Saly, Jean-Laurent Legeay, Louis Le Lorrain, Joseph Marie Vien, and Jean-Charles Delafosse. Conceptually, the design recalls the sixteenth-century auricular style by artist-craftsmen such as Adam van Vianen. In such designs, fantastical creatures and their body parts fluidly metamorphosed into handles and lids of ewer designs. Moreover, Petitot’s vase designs were also inspired by designs by seventeenth century Baroque artists such as Jean le Pautre and Stefano della Bella. Notably, a coffee pot design by Piranesi from 1769 (in his publication Diverse Maniere d’adornare i Cammini) also features a tortoise as the base. In fact, Petitot met Piranesi during his studies in the French academy in Rome from 1746-50.

However, this particular vase does not correspond to any existing antique vase prototype but is a wholly new invention. In his designs, Petitot mobilized unique and often bizarre motifs and iconographies such as dragonflies and roosters. There is even a design that features the entire bodies of satyrs as handles, as seen below! Vases were such a staple of neoclassicism that in 1764, Petitot published a suite of caricatures that parodied the fashion for the Greek style. Featured below is an example that shows a “Greek Bride” wearing a dress that suspiciously resembles an antique vase. The popularity of vases in neoclassical architecture and interior decorations is due to the fact that vases, as a motif, were understood to be direct homages to the past. An addition of a vase would immediately historicize the design. This aura of history is doubly emphasized in Petitot’s print with the broken base reading like a ruin. On this broken pedestal, the tortoise-vase seems like an antique object excavated from Italy or Greece rather than a contemporary eighteenth-century invention!

Cabelle Ahn is an MA Fellow in the Department of Drawings, Prints and Graphic Design at the Cooper Hewitt, Smithsonian Design Museum. She received her MA in Art History from the Courtauld Institute of Art and is currently studying eighteenth-century French works on paper at the Bard Graduate Center.

← The Fox and the Crow
A Fan of the Directoire Period →