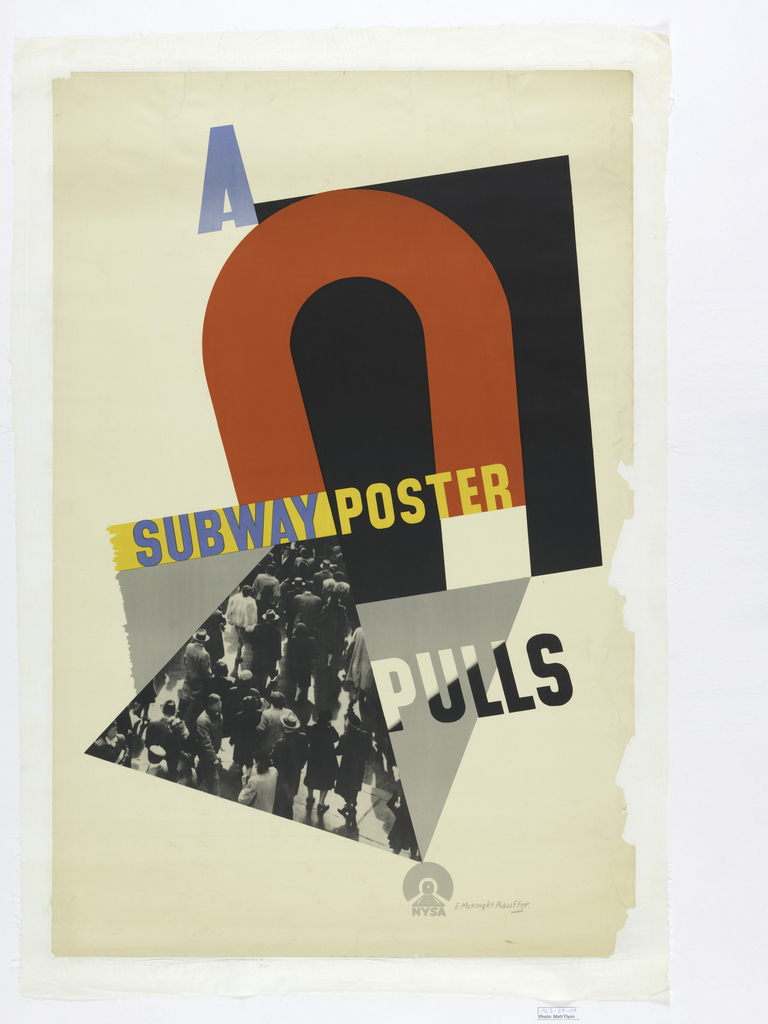 American-born E. McKnight Kauffer is perhaps best known for his series of ground-breaking poster designs produced for the London Underground in the 1920s and 1930s. Widely recognized as one of the greatest graphic designers of early twentieth century Europe, Kauffer, who lived for much of his career in London, was influenced heavily by the work of early abstract painters who subverted traditional modes of representation. In fact, as the art historian Dawn Ades suggests, his graphically sophisticated designs helped to introduce modern art to the British public. [1]

This poster, one of two Kauffer created in 1947 for the New York Subways Advertising Company, exemplifies the designer’s ability to play with ideas of modernism and symbolic imagery. A show of the designer’s work at New York’s Museum of Modern Art in 1937 confirmed a devotion to symbols that conveyed very specific meaning. “McKnight Kauffer is … a symbolist; but the symbols with which he deals are not symbols of something else; they stand in for the particular things which are at the moment under consideration. . . . Thus, forms symbolical of mechanical power are used to advertise powerful machines; forms of symbolic space, loneliness and distance to advertise a holiday resort where prospects are wide and houses few. And so on,”  British writer and philosopher Aldous Huxley wrote in the exhibition catalogue.

In this late career poster, Kauffer starts with the basic idea—an advertisement to entice potential subway advertisers—by incorporating a common sign of attraction: the magnet.  Here, the designer uses modernist photomontage, a favored technique from earlier designs of the 1930s, juxtaposing a photographic image of a thronging crowd with colorful geometric forms interlaced with blocky type. “A Subway Poster Pulls,” the ad declares, connecting visually the form of the magnet with the image of the crowd. Indeed, the message is subtle, but the imagery is powerful.

Andrew Gardner was a Peter J. Krueger curatorial intern at the Cooper Hewitt Smithsonian Design Museum in Summer 2014. He is completing a master’s in Design History from the Bard Graduate Center, expected May 2015.