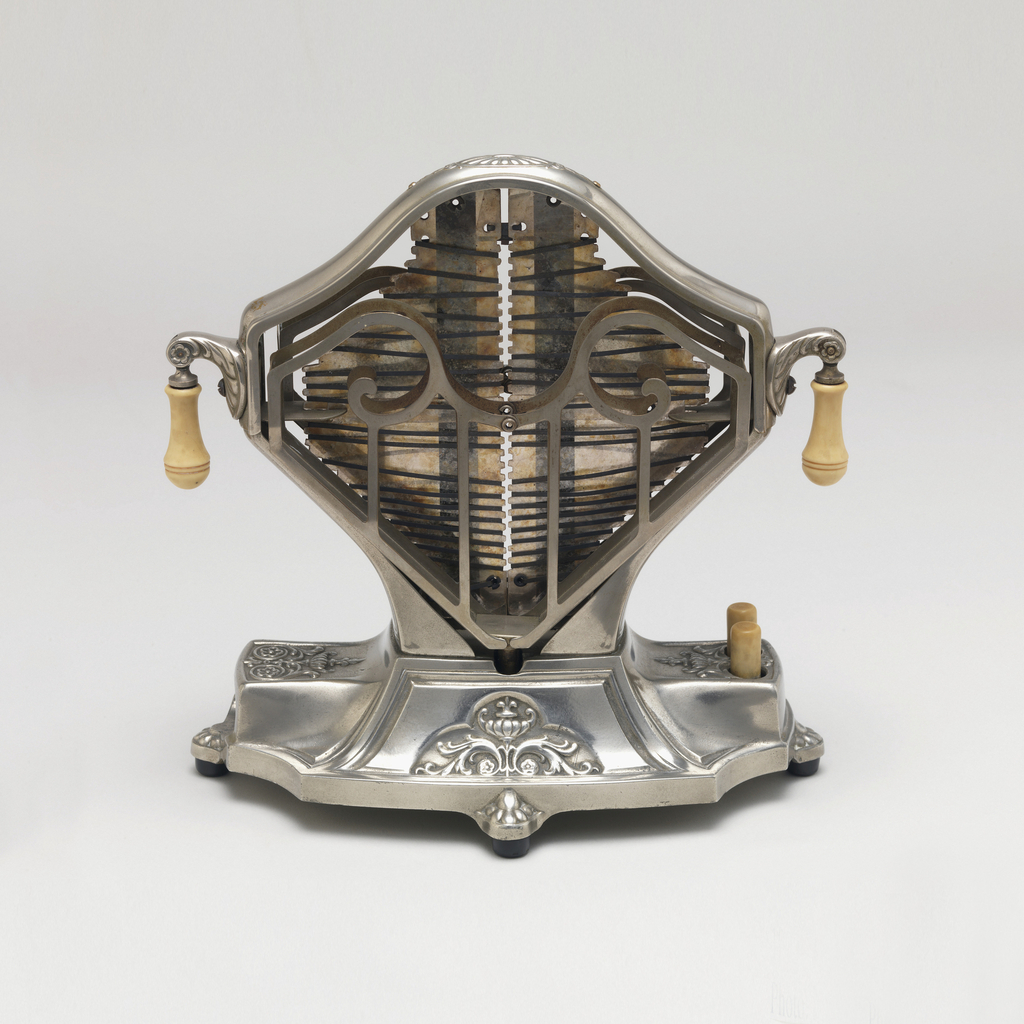 Landers Frary & Clark was one of the first American companies to manufacture electrical home appliances: in 1908 they introduced an electric coffee percolator and 1912 saw the release of an electric iron. These new products added to the company’s line of household products that they had marketed since the 1890s under the trade name “Universal,” suggesting the broad appeal of the wares. In the early 1920s the company claimed that six out of every ten households in America had at least one “Universal” product. This “Universal” toaster model E9410 was patented in 1929. Fondly called the “Sweetheart,” the toaster has a feminine appeal with its earring-like handles, diamond-shaped body, and floral and arabesque decoration. The delicate design of this metal casing helped to shield the industrial nature of the electrical heating element behind it. Therefore the toaster became an attractive addition to the kitchen as well as to the dining table at the time of a meal. As early as 1917 Landers Frary & Clark appealed directly to female consumers and advertised that “The complete independence of the hostess in preparing meals directly at the table is one of the chief charms of this modern method of electrical table service.”[1] As American households were less dependent on servants for housework, food preparation, and hostess duties, an expanding market of electrical appliances eased work for the homemaker. This toaster not only exhibits an eye-catching design but also incorporates clever mechanics. The toaster cooks two slices at a time in cages that swivel out with the touch of the raised buttons at the base, one button for each side of the contraption. Releasing the button swings the cage back against the toaster. Each subsequent pushing of a button then makes the basket rotate in the opposite direction, so that both sides of the bread can be toasted. Thus the operation of this “Universal” toaster transforms the basic act of toasting bread into an impressive tabletop performance with which the hostess could have impressed her guests.

my sweetheart was given to me by a ex northwest flight attendant 10 plus years ago.she approached me with the item and said here is an old piece of junk that you may like. I went home,opened the ‘putor and typed in lfc, toaster central popped up,went to site,clicked 1920’s toasters,lo and behold the sweetheart popped up,along with a 700.00 price tag.after the shock I went and told Florence what she had given me,her response was you will have an opertunity to do the same to someone else in the future,enjoy doing this for the rewards are great.money is a good thing,making others happy is a fulfillment.Florence was right,i have given a few ,on a scale of 1-10.many were a 9 away. I show the old sweetheart to people and they get a kick out of it.took it apart,the plate on the bottom has a signature and date,i assume this was done by the person who assembled it back in the day,still get goosebumps.

i have that toaster , never have plugged it in….

I have one in mint condition for sale

Jack Stone, is it advertised online?

I just got this toaster from my aunts home. How neat!

I have this toaster, sitting on my shelf. It belonged to my husbands grandparents in St John, Kansas. I love to have pieces of the past that include a connection to family or friend.

I have a sweetheart toaster in mint condition 500$

Jack, where is it advertised?