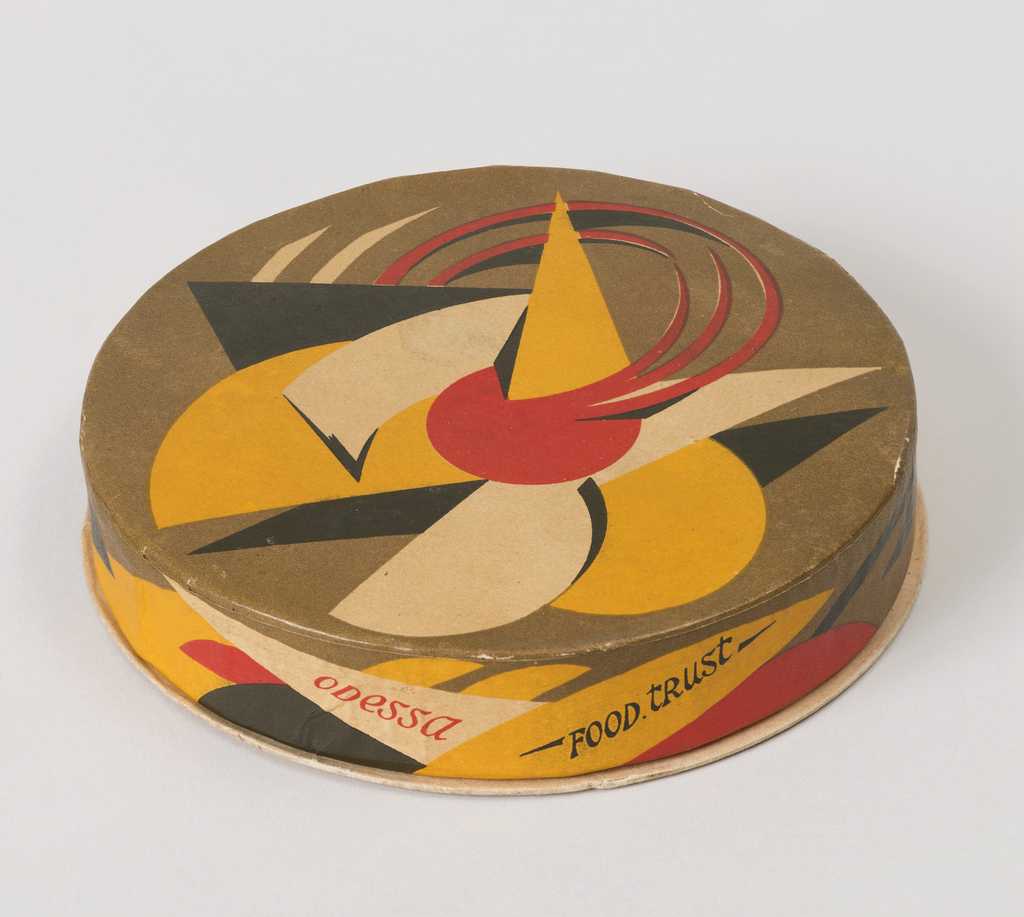 Throughout March, Object of the Week celebrates Women’s History Month. Each Monday a new post will highlight women designers in the collection.

In the tumultuous years following the 1917 Russian Revolution, a vibrant flourishing of avant-garde art emerged. Artists and designers embraced the most utopian hopes of the revolutionary spirit. They searched for new aesthetic forms that jettisoned past aristocratic traditions and spoke directly to their proletariat counterparts. Within these vanguard circles, where the dreams of a more equitable society flourished, women artists and designers such as Liubov Popova, Alexandra Exter, Zinaida Kobyletskaya worked alongside, and were held in equal standing to their male colleagues—more so than in any other European country at the time.[1]

The dynamic arrangement of geometric forms decorating this box—possibly meant for chocolates—sold by the Odessa Food Trust was designed by another one of these prominent figures, Antonina Sofronova. She had begun her training in Moscow in 1910, before joining the atelier of the painter Ilya Mashkov in 1913. Mashkov was a founding member of the artist-organized “Jack of Diamonds” exhibitions. From 1910 until 1917, six “Jack of Diamonds” exhibitions were held. These shows brought together works by Russian artists of the pre-revolutionary avant-garde and their Western European counterparts. Sofronova exhibited her paintings in the 1914 iteration of the show alongside those of Georges Braque, Kazimir Malevich, and Pablo Picasso.[2]

Following the October Revolution, Sofronova briefly taught at the State Art Studios in Tver, a city to the North of Moscow. In the autumn of 1921, she returned to Moscow and became increasingly involved in Constructivist circles, designing a cover for the art critic Nikolai Tarabukin’s important Constructivist treatise, From the Easel to the Machine (1923). During this time, constructivist artists were engaged in vigorous debates on how to take what was believed to be the universal language of geometric abstraction and apply the aesthetic to objects of everyday life.[3]

This debate became all the more urgent as the Soviet government tried to reinvigorate the country’s economy after years of civil war and the restrictive policies of War Communism—an economic program meant to control the state’s limited resources. In 1921, Vladimir Lenin, leader of the Soviet Government, announced the New Economic Policy (NEP). Under the NEP, state-owned and private enterprises were permitted to compete in a controlled market in an effort to reinvigorate the country’s failing economy.[4]

These companies turned to members of the avant-garde in order to design novel and eye-catching designs for their products. Sofronova was asked to produce a number of such designs, including a logo for the Northern Forest Company in 1923 and this box for the Odessa Food Trust.[5] Her design for the decoration of the box builds a complex arrangement of interpenetrating geometric forms. The swirling mass of circles, triangles, and sweeping lines set at sharp angles to one another give the box a sense of arresting movement. Drawing upon visual strategies pioneered by Russian, Cubo-Futurist graphic design, she also arranged the text on the side of the box on similar dynamic angles.[6] The overall effect is a decidedly modern and energetic look capable of catching the consumer’s eye.

Devon Zimmerman is a Graduate Curatorial Research Fellow in the Product Design and Decorative Arts Department at Cooper Hewitt, Smithsonian Design Museum and a PhD candidate at the University of Maryland, College Park.

[3] These debates were held by The Society of Young Artists (OBMOKhU), a group of Soviet Artists who looking into new materials and methods of art marking that would better align with methods of production. For an in-depth discussion of this subject, see Maria Gough, The Artist as Producer: Russian Constructivism in Revolution (Berkley: University of California Press, 2005).

← Q&A with Saba Ali, Stylist for Contemporary Muslim Fashions
The Sky Is Darkening Like a Stain →