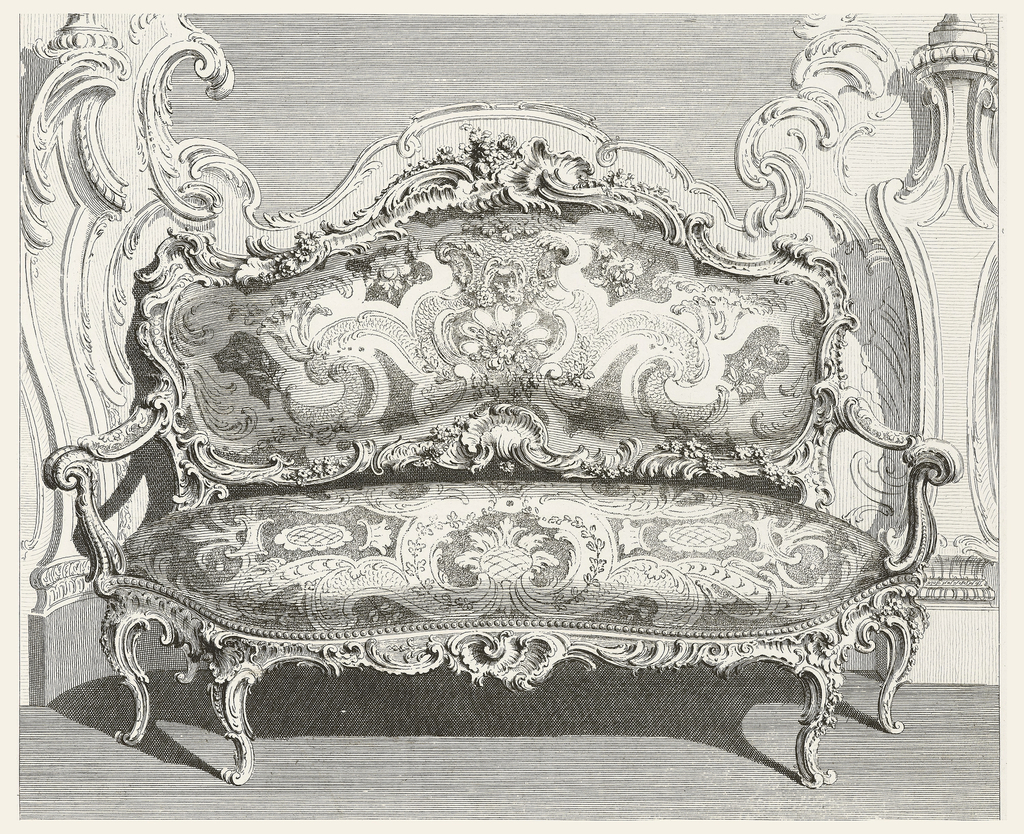 Small Sofa for Count Bielenski, Grand Marshal of Poland is a print on white laid paper, etched and engraved by Gabriel Huquier (French, 1695-1772). It features a sofa or canapé designed in the Rococo style, framed by an interior wall decorated with carvings that mirror the graceful curvatures of the sofa’s structure. The goldsmith, sculptor, and designer Juste-Aurèle Meissonnier (French, b. Italy, 1695–1750) designed the room and its furnishings–including the sofa–in 1735 for Count Franciszek (François) Bielenski (1684-1766), a Polish nobleman and statesman. This print, published in the early 1740s, is bound in an album of prints that reproduce Meissonnier’s designs. The prints record Meissonnier’s oeuvre, drawing attention to his royal patronage and ability to create harmonized interiors overflowing with fanciful Rococo designs.

Juste-Aurèle Meissonnier was born in Turin, Italy in 1695, where he was trained as a goldsmith by his father, Etienne  (1660–1746). The younger Meissonnier achieved fame in France, where he was appointed designer to King Louis XV in 1726 . During the first half of the eighteenth century, Meissonnier received numerous commissions from the elite social circles of France, Portugal, and Poland, where his whimsical Rococo style came to dominate and define the period taste.[1]

After decorating the apartment of Countess Catherine Bielenska (1684–1761) in 1734, Meissonnier was commissioned by the Countess’ brother, the Count, to design the interior of his townhouse in Warsaw, Poland.[2] Utilizing opulent ornamentation and meticulous craftsmanship, Meissonnier created every component of Count Bielinski’s room, from the painted ceiling to the decadent wall paneling and accompanying furnishings. (Also in the Cooper Hewitt collection is Meissonnier’s design for the ceiling, an elaborate and colorful Chariot of Apollo.)

Meissonnier, Chariot of Apollo, Design for the Ceiling of Count Bielinski’s Cabinet, 1921-28-214.

Meissonnier’s designs showcase wall paneling and upholstery composed of swirling curves and shell shapes. His sofa’s intricately carved frame of sinuous shell, floral, and vegetal forms carries the viewer’s eye throughout the piece, fusing together the wall paneling and upholstery, creating a sense of unity that could not achieve its beauty without each of the space’s corresponding elements. The Rococo style called for a cohesive interior space, represented by the ceiling and wall paneling decoration harmonizing with all of the furnishings.

The word Rococo comes from the French term rocaille, which refers to small stones and shells. Exposed to the metamorphosis of artistic invention, the shell form became the foundation for the c- and s-curves widely seen in Rococo decoration.[3] The sofa design seen here exhibits Meissonnier’s adoption of the shell’s shape as a foundation for his curvilinear, sculptural furniture.

When viewed together, Meissonnier’s designs for Count Bielenski’s cabinet showcase his commitment to the French Rococo style and Louis XV’s desire to separate the contemporary style from historical traditions. The overwhelming use of rocaille ornament, taken from nature and implemented into an asymmetrical, fluid format, displays Meissonnier’s dominance in the French Rococo style throughout Europe in the first part of the eighteenth century.

Rachel Pool is a graduate student in the History of Design and Curatorial Studies program offered jointly by the Parsons School of Design and the Cooper Hewitt, Smithsonian Design Museum. She is a Fellow in the museum’s Drawings, Prints & Graphic Design Department.

← The Tortoise in the Hair
Wallpaper Celebrates Leisure Activities →