Capturing the 1980s With Sleek Design and Whimsy 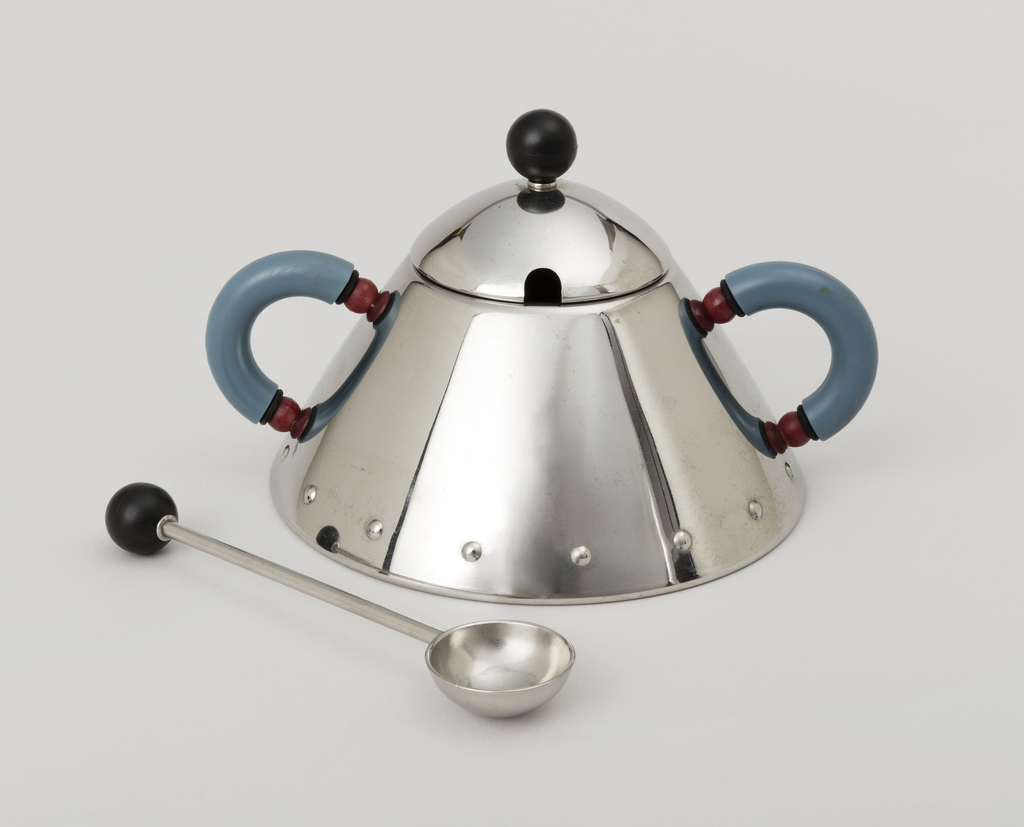 This stainless steel sugar bowl designed by architect Michael Graves for Italian metalwork manufacturer Alessi S.p.A. is part of a line of kitchen and table wares that have found their way into homes around the world. Graves’s model 9093 whistling kettle of 1985 was the initial object in the range. The conical shape–with its polished surface, “dot” accents encircling the bottom, and perky red bird-shaped whistle–helped move kitchen tools away from the mundane and  into the world of designer goods. The popularity of the kettle led Graves to create auxiliary pieces which included this sugar bowl and spoon, a creamer, cups and mugs, coffee presses, a pitcher and a salt and pepper set.

Maintaining the geometric motifs of the kettle, the sugar bowl and spoon echo the conical form and decorative dots, as well as adding two blue c-shaped plastic handles supported with red beads inspired by the accents on the kettle. The domed lid is surmounted by a simple, ball-shaped black plastic knob. The spoon is simply a hemispherical bowl on a thin shaft that terminates in the same black plastic ball as the sugar bowl lid.

Michael Graves was an influential American architect, designer, and teacher. He received his architectural training at the University of Cincinnati and at Harvard University. In 1960, he won the Rome Prize, allowing him to study for two years at the American Academy in Rome. In the 1970’s Graves was interested in modernism, but by the 1980s he began to veer away from abstract modernism, towards a more humanistic approach to his architecture. His postmodernist philosophy brought together the elements of color, art, and emotion. It was also in the 1980s that Graves began his collaboration with Alessi to design home goods that exhibited his vision and aesthetic.

Alessi, the family firm founded in 1921 by Giovanni Alessi, has produced household and kitchen wares for nearly a century under the premise that people are not motivated merely by functionality, but by their relationships with the things they live with and use. The simple, ample form and whimsical accents of the 9097 sugar bowl and spoon seem to have stood the test of time–the model is still in production 31 years after it was introduced.