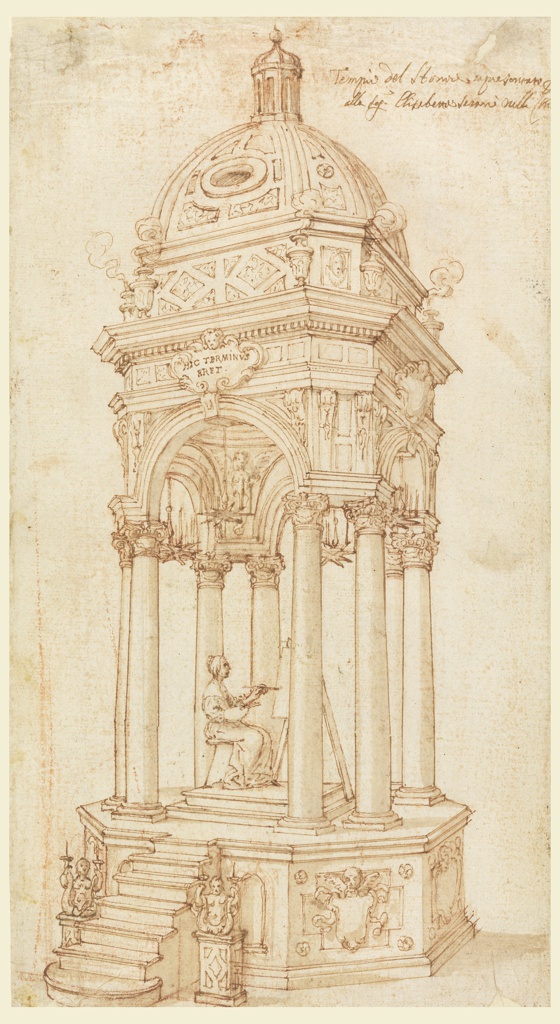 On November 14, 1665, the Basilica of San Domenico in Bologna was crowded with mourners. They were gathered to remember a young female artist, Elisabetta Sirani (1638 – 1665), who had died suddenly the previous August.[1] Although only 27 at the time of her death, Elisabetta was already an acclaimed painter, draftsman, and printmaker—a contemporary biographer praised her as “the marvel of art, the glory of the female sex, the gem of Italy, the sun of Europe.”[2] Her funeral was suitably extravagant, incorporating lavish decorations overseen by Matteo Borboni (1610 – 1667).[3]

In this drawing, Borboni records his design for the funeral’s most ambitious decorative element, a structure identified at the upper right as Elisabetta’s “Temple of Honor.” At the bottom of the sheet, a pair of sirens (a play on her surname) flank a staircase rising to an octagonal platform. There, eight coupled columns encircle an image of the deceased artist, seated, painting at an easel. Four arches spring from the columns to support a high windowed cupola above. Working in brown ink, Borboni defines the building in strong, sure strokes, using subtle washes to give fullness to the columns and to create depth through a play of light and shadow.

Published accounts of the funeral provide ample information about this remarkable invention, a type of temporary monument called a catafalque.[4] Typically, these ephemeral wooden structures would serve to support the casket during a funeral. Elisabetta’s catafalque, however, was purely decorative: her body had been laid to rest several months previous.[5] In lieu of a casket, Borboni included a life-size statue of Elisabetta made from wax.[6]  It is this wax effigy, and not the living artist, that appears at the heart of Borboni’s drawing.

Installed at the center of the church, Elisabetta’s catafalque must have been an astonishing sight. Most of the structure was painted to look like marble, with purple columns in imitation of porphyry (an expensive stone used in ancient architecture), their bases and capitals made to resemble gold.[7] A Latin inscription set above the arch, “HIC TERMINVS [HA]ERET” borrows a phrase from Virgil’s Aeneid, “THIS IS THE END,” uttered by the formidable queen Dido as she confronts her powerlessness in the face of death. [8] The line is a fitting tribute to Elisabetta Sirani, the “gem of Italy.”

[1] Her death was not without scandal. Elisabetta had complained of stomach pains, and a servant, Lucia Tolomelli, was accused of having poisoned her mistress. The charges were dropped when an autopsy revealed that ulcers, in fact, were to blame. For an account of the trial, see Ottavio Mazzoni Toselli, Di Elisabetta Sirani, pittrice bolognese e del supposto veneficio onde credesi morta nell’anno XXVII di sua etá. Racconto storico di Ottavio Mazzoni Toselli (Bologna: del Genio, 1833). For a biography of Elisabetta, including an account of the funeral, see Conte Carlo Cesare Malvasia, Felsina pittrice: vite de pittori bolognesi, vol. II (Bologna: Domenico Barbieri, 1678), 453-487.

[3] Borboni was a close friend of Elisabetta’s father, Giovanni Andrea Sirani (1610 – 1670), who was also an artist, notably an assistant to the celebrated Bolognese painter Guido Reni. On the family, see Babette Bohn, “The construction of artistic reputation in Seicento Bologna: Guido Reni and the Sirani” in Renaissance Studies Vol 25, No.4 (September 2011): 511-537.

[4]  Giovanni Luigi Picinardi, Il penello lagrimato. Orazione funebre … in morte della signora Elisabetta Sirani pittrice famosissima (Bologna: Giacomo Monti, 1665). Borboni’s drawing almost certainly served as the model for an illustration published in Il penello lagrimato, engraved by Lorenzo Tinti, and was probably created specifically for that purpose. In a second drawing also in the Cooper Hewitt collection (1901-39-2493), Borboni captures the catafalque with less detailed ornament and more attention to architectural design. This may be a preliminary study related to the planning phase.