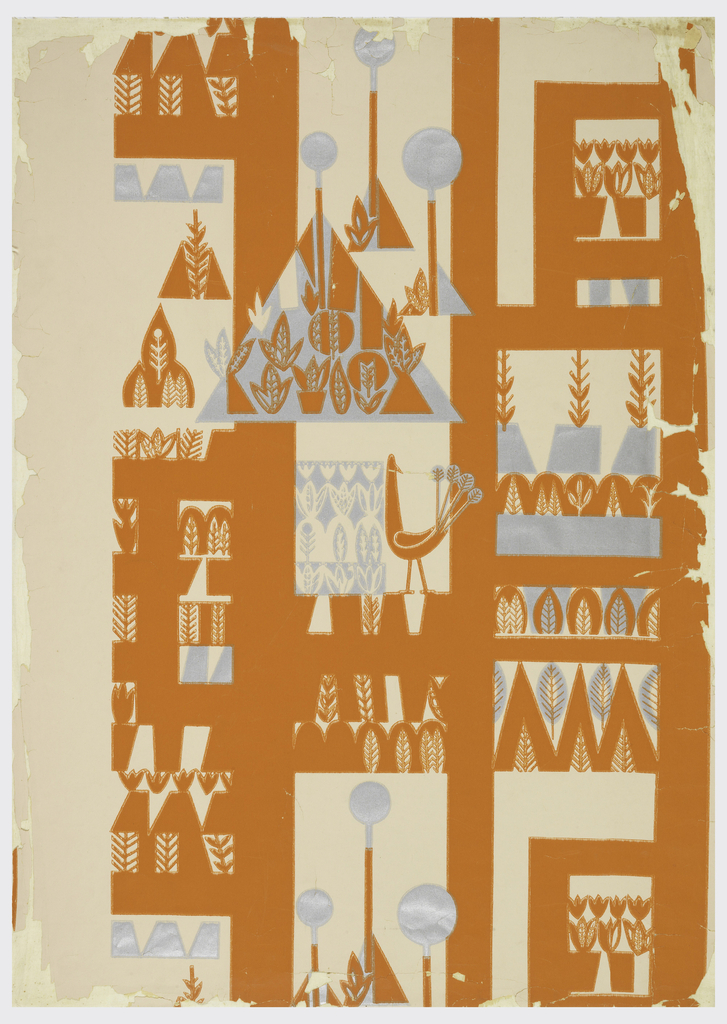 This wallpaper delights with its lively motifs of birds and plants and playful stylization. The bright colors and presence of nature injects an otherwise strongly geometric and simplified rendition of an urban landscape with a cheerful energy. The influence of the Bauhaus, often seen in Flögl’s work, can be seen in the fragmented angular forms and limited color scheme. Flögl transforms the typical primary colors used in the Bauhaus into red-orange and baby blue. The warmth and vibrancy of the pattern is typical of the designer, who is represented in the collection with almost sixty objects.

Mathilde Flögl, who likely created this paper, was one of the more prolific contributors to the Wiener Werkstätte, the Viennese craft community that operated from 1903 to 1932. Her output included designs for wallpapers, textiles, posters, leatherwork, book design, glass, and ceramics. She was one of a large group of women craftsmen, including Felice Rix-Ueno, Vally Wieselthier, and Maria Likarz-Strauss, who joined the workshop beginning in the 1910s. Like many of her peers, she was previously a student at the Viennese Kunstgewerbeschule (Arts and Crafts School), where she was taught by the leading designers of the Werkstätte such as Josef Hoffmann and Koloman Moser. Flögl began working freelance for the Werkstätte in 1916 and left in 1931 to establish herself as an independent craftsman. She ran her own workshop from 1931 to 1935. In terms of wallpaper, her most significant work was a line of twenty patterns in a style similar to this sidewall that she produced in 1929 for the Swiss manufacturer Tekko and Salubra. Flögl’s success and importance at the Werkstätte is attested by the fact that she handled the book design for the workshop’s 25th-anniversary celebratory publication, Die Wiener Werkstätte, 1903-1928: Modernes Kunstgewerbe und sein Weg (The Wiener Werkstätte, 1903-1928: The Development of Modern Applied Arts.). This paper perfectly showcases the exuberant use of color and forms that defines her work.

← A Fashionable Collaboration
In the Eye of the Tornado: Rethinking the Limits of Design →