Mourning the Memory of Ill-Gotten Gains 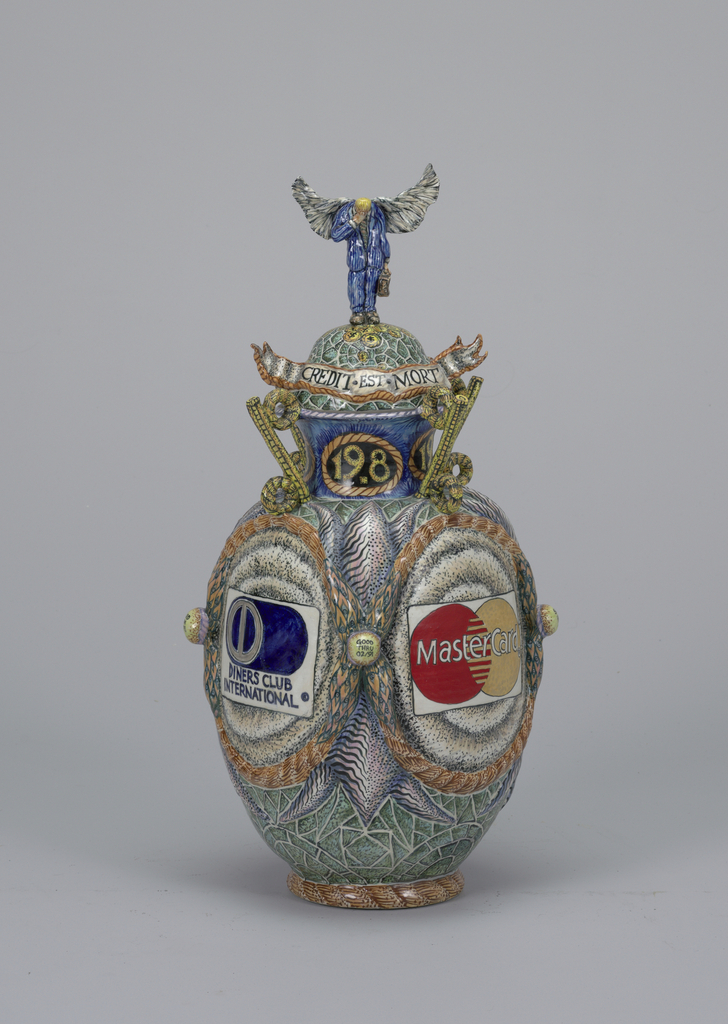 This reliquary vase, created by Matt Nolen, is featured in the exhibition, The Virtue in Vice, currently on view at Cooper Hewitt. The vase was selected as a visual interpretation of greed, here defined as the acquisition of large sums of money, universally recognized as the hallmark of avarice. Though tongue-in-cheek, Nolen’s reliquary pointedly illustrates the ease of amassing material wealth, as well as the tragic result of over-extended credit.

Matt Nolen’s ceramics are inspired by traditional, even primeval, forms like urns, ewers and vases. Ceramic urns and vases have a long association with funereal customs, serving as reliquaries and repositories from the earliest times of human history. Nolen’s vase pays homage to this ancient tradition of memorializing the passing of the honored or sacred while at the same time satirically commenting on the monetary realities of American society.

This reliquary urn is ornamented with the images of four major credit cards surrounded by wreaths which are symbolic of death and mourning. Further, the lid is inscribed with the words “Credit est Mort” (Credit is Dead) and is surmounted with a finial in the form of a winged businessman in mourning. Interest rates are inscribed on the neck of the urn while percent signs are applied to the shoulders as handles. All the elements come together as a unified whole, a three dimensional vessel which marks the passing of wealth.

A tour de force, the large size and the clear meaning of this ornament make the viewer step back and evaluate the cultural pull to acquire and amass money and goods and the sadness that ensues when that fortune is gone.

The Credit Card Reliquary Vase is included in The Virtue in Vice exhibition on view through March 25th, 2018.