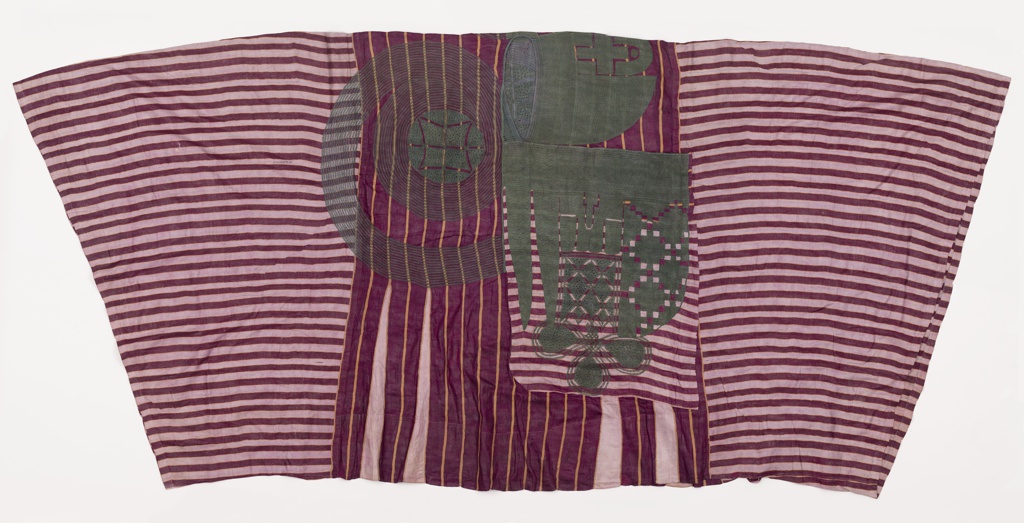 Prestige robes with flowing, wide sleeves and elaborate embroidery were worn by aristocratic Fulani, Hausa, and Nupe men. Their use is primarily associated with the 19th-century Sokoto Caliphate, centered in northern Nigeria, and their distribution is to key Islamic trade routes throughout the region. Their lavish use of costly hand-woven silk proclaimed the wearer’s wealth and status, and the elaborate hand-embroidered silk designs on the front and back of the chest established his identification with Islam. Their fluid compositions were drawn by Islamic scholars, based on the calligraphic amulets and drawings found in Islamic prayer books and, as such, are believed to impart apotropaic or protective power. Designs associated with protection and chieftancy include the “two knives” pattern of triangular forms, the stylized 8-pointed star, and the tambari or king’s drum, a crossed circle in a spiral.

The striped fabric is made from alara or waste silk, which was a major import from Europe in the 18th and 19th centuries. The fiber was dyed in North Africa, typically in a magenta color believed to be cochineal-based, and traded on to sub-Saharan Africa. In Nigeria, the silk was hand-woven in combination with locally-grown cotton into a variety of prestige fabrics. In this example, the white and yellow stripes are cotton, the magenta is silk.