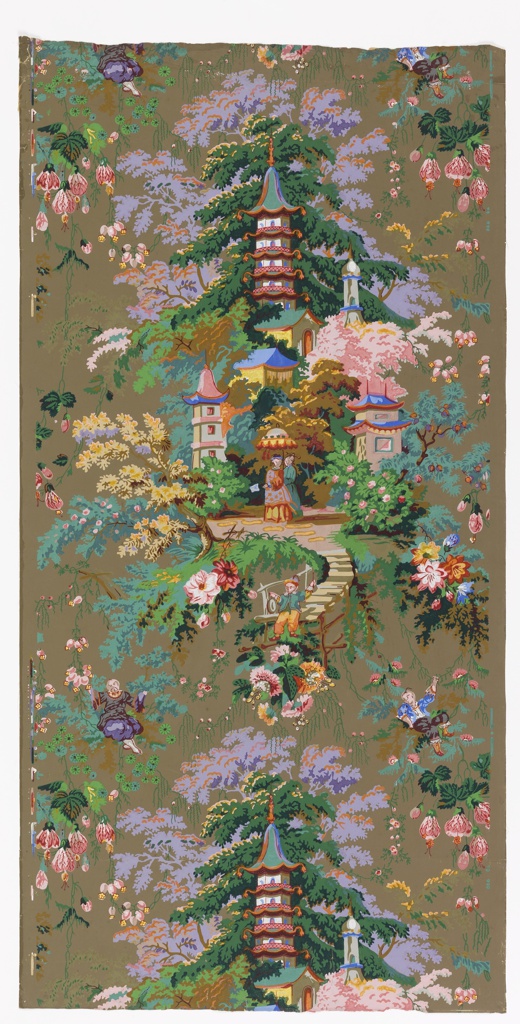 This beautiful sidewall is a great example of the Rococo Revival style at its most wild and vivid. Its design, a repeating landscape vignette floating in space bordered by sprays of flowers, is common in 18th century wallpapers. This paper also uses the old-fashioned technique of block-printing, despite coming from a time when machine-printing dominated the British wallpaper industry. By 1890, only 10% of papers in Britain were block-printed, due to their high cost of production. The reason this paper would use such an expensive method of manufacture is because of the enormous amount of colors, the rich details, and the size of the repeat in the pattern, which could only be achieved with block-printing. Such brilliant colors also had to be printed using distemper or water-based pigments instead of oil-based ink. The result, as this sidewall shows, was luxurious, but papers like these did have their drawbacks. Not only were distemper- or water-printed papers less practical, since they could not be cleaned or washed, but they lacked the shading and gradient effects seen in oil-printed papers that were popular among Victorians. Nevertheless, for those who could afford to buy and maintain them, these elaborate and beautifully-colored papers were extremely popular. The use of block-printing in this sidewall, and the subsequent effect of crude shading, only makes it more evocative of its 18th-century predecessors.

Another way this paper draws from the Rococo is the presence of Chinoiserie, Chinese-inspired imagery, in the pagodas and the figures walking on the path and cavorting in the sprigs of flowers. Oddly out-of-place is the tower with an onion dome, a distinctly non-Chinese architectural form, but the designer probably would have thought such a building was suitably “exotic” to include in the scene. The paper plays into the 18th-century idea of China not so much as an actual place but as a whimsical fantasy land. Considering this was made at the turn of the century, when anthropology had already developed as a discipline and dozens of books had already been written on Chinese art, culture, and history, this sidewall’s antiquated imagery shows an unfortunate holdover of earlier attitudes to foreign culture. Old-fashioned in both its imagery and manufacture, this sidewall demonstrates both what was beautiful and what was ugly about the Victorian idolization of Rococo design.