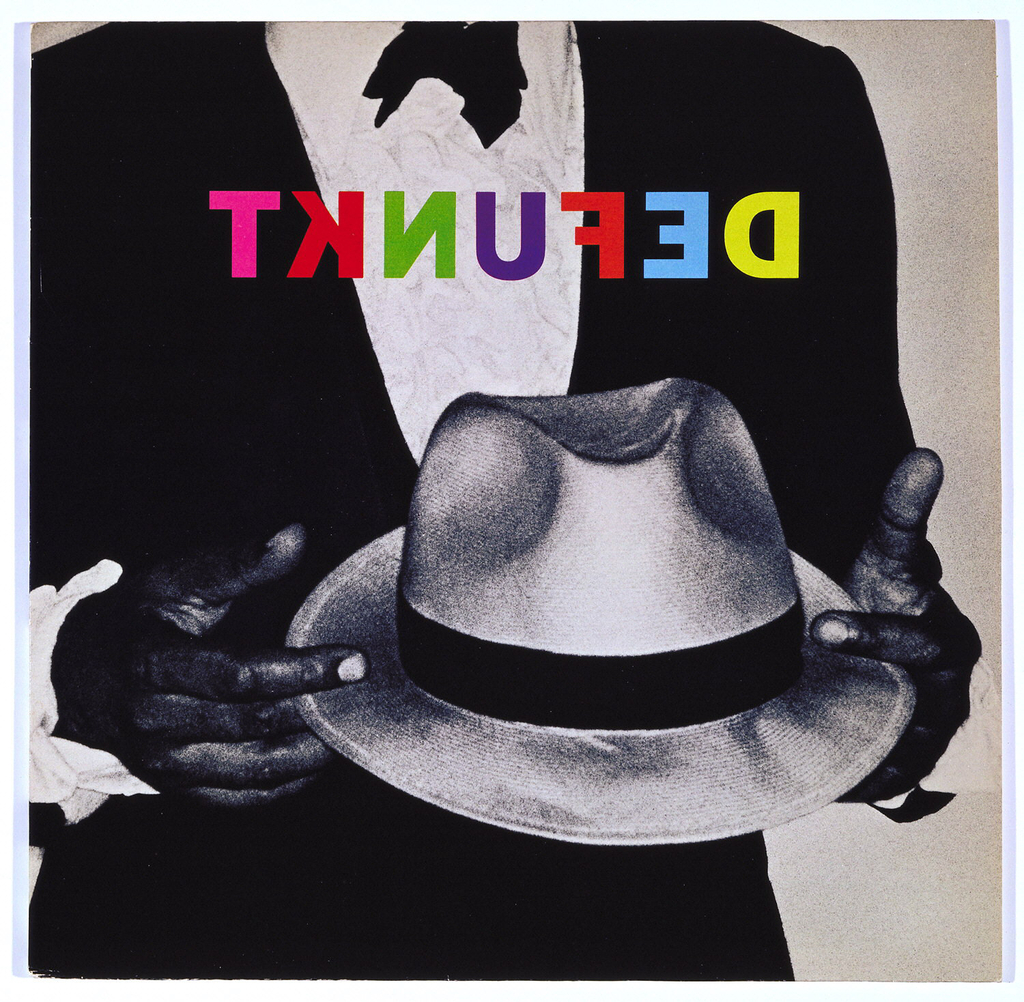 A man in a tuxedo holds a white fedora hat in this Defunkt album cover designed by Tibor Kalman. As in some of his other album designs, Kalman chose to alter the band’s name through reverse lettering. Printed in multicolor, the text is especially striking printed atop the black and white photograph. When reflecting on his design, Kalman said he had chosen the font colors after seeing “those leisure suit colors from 125th street” in Harlem.[1] Album covers are just one of the graphic forms that Kalman pursued as a designer; he designed posters, postcards and much else, and also worked as editor-in-chief of Colors magazine.

By the age of 30, Kalman had founded a design firm in New York called M&Co. The album shown above, designed in 1980 for Joseph Bowie’s jazz punk band Defunkt, was one of M&Co’s earliest album cover projects. The front cover’s cropped view makes the man in that photo difficult to identify. But after flipping the album jacket, it becomes clear that he is trombonist and bandleader Joseph Bowie. Bowie appears again in a smaller group shot on the album’s back cover, flanked by band members in white tuxedos. The rear image gives context to the cover, and together these photos frame the album visually. Additionally, the fact that the text is shown backwards on the front cover and forwards on the back creates a certain continuity between both sides of the jacket; it gives the band’s name a three-dimensional quality. When reflecting on the design, Kalman explained that he decided on reverse lettering “just because it seemed appropriate to the word Defunkt.”[2] Defunkt’s music bridges multiple genres including punk, jazz and funk, so it’s fitting that Kalman paired their bold multi-genre musical approach with bolded, multicolored, reverse-lettered text.

Back cover of Defunkt’s eponymous 1980 release

Born in Budapest in 1949, Tibor Kalman was once called “the bad boy of graphic design” by the New York Times.[3] As a Hungarian-American designer, Kalman collaborated with Defunkt after they recorded an album to lyrics by a Hungarian playwright. Kalman was recognized not only for pushing the boundaries of graphic design but also for using his designs to fight for causes such as economic equality and environmentalism. The album designs that Kalman created for New York’s early Eighties punk, new wave and experimental bands can be seen to reflect the moods, themes and ideologies contained in the music scene itself, whose tone ranged from cynical to ironic, cerebral to energetic. Kalman’s important place in this scene is evident not only in this Defunkt record, but in his designs for the Talking Heads, David Byrne, Jerry Harrison, and Laurie Anderson. Kalman said that “M&Co’s affair with the early Eighties music scene was characterized by a desperate inventiveness driven by pitifully low budgets and terrible photographs.”[4] For the above album, Kalman wrote that he “did a photo session with the band and it came out really badly, so we took out a detail from the photograph.”[5] Kalman saw low budgets and bad photographs as representative of the scene; by taking a detail from a “terrible photograph,” however, Kalman created a visually compelling album cover with striking text that works well to represent the band’s music and capture the meaning behind their name.

Source photo for Defunkt back cover