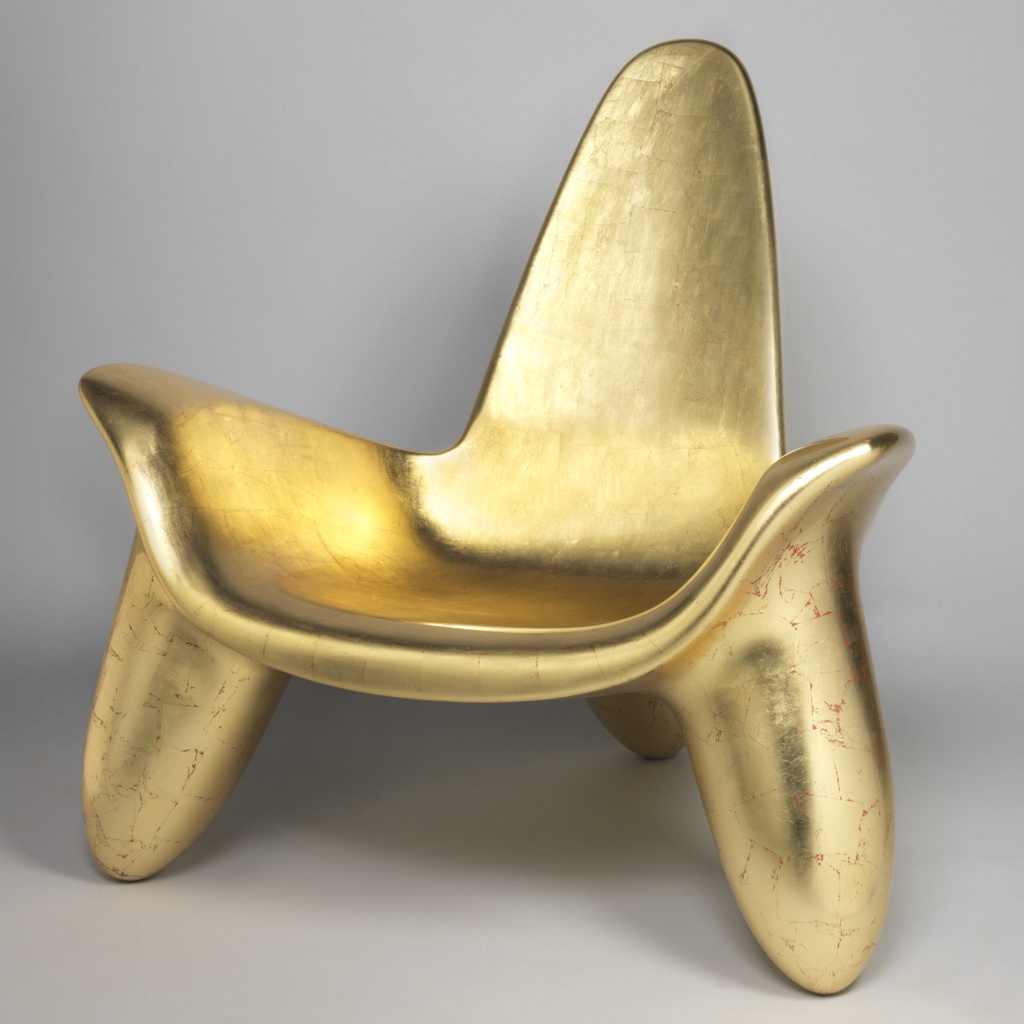 Is it possible for a chair to be organic, imaginative, and even a little bit sexy? Perhaps, if it is one of the works by American designer Wendell Castle. Castle’s Triad chair is a piece composed of curvilinear sweeps of gilt fiberglass that make a strangely inviting seat. At the risk of pushing the pun too far, it seems that the Triad chair is a gold-medal example of the major aesthetic principles and ideas that inform Castle’s work. This defining style is, above all, one that embraces biomorphic, expressive, organic forms and eschews any semblance of the square. These principles are evident throughout Castle’s design process, as seen in his sketches for the chair.

An individual standing in front of the Triad chair might be confused as to whether he or she should simply admire the chair or take a seat. On one hand, the chair is sculptural; on the other, it recalls a functional wooden Adirondack chair. Indeed, Castle’s work challenges the traditional ways one might interact with both art and furniture. Art + Auction magazine wrote that he was “… the only major American designer practicing on the cusp of art and design.”[1] Regarding his own work, Castle proclaimed that he wanted his furniture to be “collected like art and appreciated like art,”[2] and throughout his career was influenced by designer Don Wallance’s ideas regarding the convergence of art and utility. The Triad chair certainly seems to teeter on this cusp.

However, viewers and sitters alike can appreciate the chair’s tongue-in-cheek wit and its nod to history, both international and personal. The gilt fiberglass recalls the fashionable and traditionally popular style of gilt wood furniture, often seen on Louis XV-style French upholstered armchairs. Castle has updated the base material from wood to fiberglass, which wasn’t developed industrially until the 1930s. He has also covered the entire chair in gilt, poking fun at the taste for extravagance that such ornamentation could reveal.

The Triad chair draws from Castle’s own history of work, as well. His interest in creating caricatures of traditional furniture was evident early in his career. This experimentation can be seen in the inventive installation of a table and chairs in graphic designer Douglas Baker’s dining room in 1966. Castle’s experiments in creating plastic furniture in the 70s, such as the Molar settee of 1969, reveal a harbinger’s predilection for the now-popular amorphous “blob” form that artists create using computer programs.

As a piece designed in the twenty-first century following a long and inventive career, perhaps we can understand the Triad chair to be a culmination of some of Castle’s most developed ideas. Or, if you’re unsure, you can take a seat and think it over.